Our abundant seafood is likely one of Louisiana’s best assets. We’re blessed with all that the Gulf and the wetlands have to offer — like shrimp, oysters, crab, crawfish, alligator, and a huge variety of fish from catfish and redfish to bass and yellow-fin tuna. Luckily for us, great chefs in New Orleans are skilled at taking advantage of such a bounty, creating delectable dishes from simple ingredients … and the best part … they’re sharing some of their recipes with us! 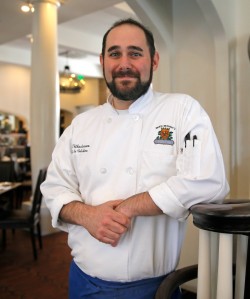 “During the Lenten season, we’re supposed to self-reflect, and practice self-denial from meat and suffer through,” Thibodeaux says. “But with such a great abundance of local seafood available here in New Orleans, how bad is the self-sacrifice, really? How often do you find yourself or others saying, ‘Aw nuts! Redfish and crabmeat again?’ or ‘I am so sick of baked oysters and barbecue shrimp!’? Personally, I am looking forward to suffering this year.”

Serves 4 as an appetizer

In a blender, combine the garlic, shallots, Dijon mustard, thyme, rice wine vinegar and red bell pepper, and puree until smooth. In a slow steady stream, and the salad oil and then the truffle oil. Season to taste with salt and fresh-ground pepper. This vinaigrette can be made several days in advance and will keep refrigerated in an air-tight jar for up to one week.

To serve, place crab fingers in a glass bowl and add the vinaigrette, tossing gently. Cover, refrigerate and allow to marinate for at least one hour, tossing every 15 minutes or so. Serve in individual bowls or family style, if you like. It also wouldn’t hurt to have some crusty bread around for when all the crab fingers are gone, but you still have a little vinaigrette left at the bottom of the bowl! 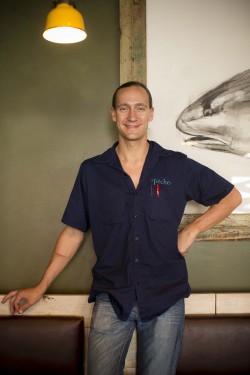 “Cooking seafood on a large wood-burning grill brings a new set of flavors to familiar seafood,” Prewitt says. “Quickly seared tuna really highlights what a hot fire can do to fish.”

Combine all ingredients and mix well.

Grilled Tuna
Four 6 to 8 oz. portions of tuna, cut from the center part of the loin
(Chef Thibodeaux note: “I prefer to have them cut into long rectangles instead of steaks; it makes it easier to grill them evenly.”)

Dry the fish with a paper towel, and very lightly coat it with olive oil. Season the tuna liberally with kosher salt and pepper, and then allow the fish to rest for 10 to 15 minutes at room temperature. This will allow the seasoning to adhere and allow the interior to come up to room temperature. “I like my tuna served rare, but not ice cold in the center, and well done on the exterior,” Thibodeaux says.

Build a bed of coals at medium-high heat. Lightly oil the fish and the grill grates. Place the fish on the grill, and leave it alone for three minutes. Do not cover. Using a thin spatula, work the fish gently off of the grates by gently lifting the edge and sliding under. Flip the fish, and cook for two to three minutes more. Flip it again, and cook for two more minutes, and then flip for the third (and last time) to cook for one to two minutes. Gently press on the fish to test for doneness. The exterior should be firm and not yield to pressure, but the interior should be soft and give easily. Transfer the fish to a cutting board and slice on a bias across the grain. Spoon a generous amount of the olive salad over the fish and season with a good finishing salt. 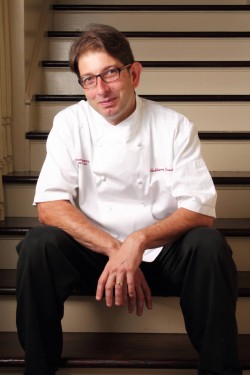 “Lenten sacrifice in New Orleans often takes the form of a fried seafood platter,” Scanio says. “Perhaps less indulgent and certainly more delicious is Delmonico’s rendition of a classic drum meunière, which you can now cook at home on any Lenten Friday or enjoy any day of the year at the restaurant.”

Preheat the oven to 350 F. Salt and pepper both sides of each fillet and lightly dredge in flour, shaking to remove excess. Heat a large nonstick skillet over medium-high heat. When hot, add butter and cook until it turns golden brown. Add two tablespoons of the clarified butter or oil. When the mixture is hot, add the fillets and cook until crisp and browned, about two to three minutes per side. Remove fish from the skillet to an oven-proof pan. If the fillets are not completely cooked through, transfer them to the oven to finish cooking.

Wipe the skillet, and return it to the stove-top over medium-high heat. Add the remaining two tablespoons of clarified butter or oil and, when hot, add the shallots. Cook until the shallots are translucent; add the potatoes and artichoke bottoms and cook, tossing, for two to three minutes, or until lightly golden and heated through. Add the chicken stock and cook, stirring occasionally, until reduced in volume by two-thirds. Add the Meunière Compound Butter, and stir until the butter has melted into the broth to form a sauce that is thick enough to coat the back of a spoon. Remove from heat so that the sauce does not boil, and set aside while you assemble the garnish.

In a medium bowl, combine the arugula, tomatoes and crabmeat. Season lightly with salt and pepper, and add the lemon juice and extra-virgin olive oil to taste; the salad should be just lightly dressed.

Heat a small skillet over medium-high heat. When the skillet is hot, add the remaining half stick of butter, along with the thyme leaves and bay leaf, and cook until the butter is browned. Immediately remove the pan from the stove-top, and strain the butter through a fine-mesh sieve into a heatproof bowl, and transfer to the refrigerator briefly until the brown butter has cooled to room temperature. (Do not allow it to harden.)

When the brown butter has cooled slightly, whisk it into the seasoned butter mixture until thoroughly combined. Transfer the compound butter to a piece of plastic wrap or parchment paper, and roll up and twist the ends tightly to form a cylinder. Refrigerate until the butter is thoroughly chilled, up to several days in advance.