Home IN THIS ISSUE Anthony Davis and the Pelicans make their playoff push.
IN THIS ISSUE
SPORTS
March 3, 2014 Paul Wegmann 0

Anthony Davis and the Pelicans make their playoff push.

In March, New Orleans will be basking in another Mardi Gras season, intermixed with sports fever. 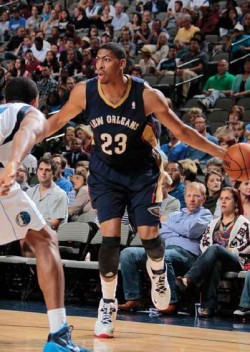 March Madness is not just about college basketball; it also means that every March almost every NBA team is faced with a closing stretch of roughly 20 games — in which they can make a mad rush for the playoffs or drop out. The Pelicans, of course, play in the uber-tough Western Conference, in which the final playoff seed will have to win nearly three out of every five games — a monumental, but not impossible, achievement for such a young, rebuilding team.

The future of the Pelicans and Anthony Davis’ development are inherently intertwined, as Davis is unquestionably the centerpiece for a franchise with a new name, new colors and new stadium branding. Indeed, Davis has the potential to be on the Mount Rushmore of the NBA greats, yielded by the next generation of players following James, Anthony and Durant, and his initial exclusion from his hometown’s All-Star game is almost certainly one of the most controversial omissions in the last 20 years of the event (and will likely look more and more absurd over time). He may already be a top-five player in the league, and he has shown tremendous shooting range, including a classic and deadly outside jumper, defensive versatility, rare and improving offensive skills, and awareness perhaps comparable to Kevin Garnett (but with even better shot-blocking ability). Given all this, Davis’ and the Pelicans’ progress is excellent.

If the goal is winning three out of every five games as a standard, then the team has proven itself capable of doing that — having gained streaks of winning six or seven games out of 10 here and there throughout their schedule. Offensive rebounding is one of several strengths to emerge: Davis, along with Ryan Anderson and Jason Smith, were the fifth leading offensive-rebounding team in the NBA into February, which is phenomenal, though their defensive rebounding ranked near the bottom, at 26 out of 30 teams.

Featuring Ryan Anderson at power forward was an important part of the team’s philosophy, which often paid dividends, especially as the team refused offers in the past to trade him for a more traditional defensive center. With Jason Smith continuing to play solidly at center, the team was poised to become one of the best rebounding teams in the league. However, they could certainly use one more big body to create a more effective rotating defensive wall. Davis’ post game continues to improve, or perhaps it is merely underrated given the roles assigned to Smith and Anderson.

Meanwhile, to their credit, the front office has continued to plug away at making changes that will land the right combination at guard. Eric Gordon remained healthy throughout the season, and Jrue Holiday, Tyreke Evans and Brian Roberts have all proved to be efficient and exciting stars.
Altogether, with their flexibility at guard combined with the talent, size and chemistry employed at forward and center, the Pelicans could very well explode at the end of the year. The West will undoubtedly be fun to watch. With their remaining 24 games after March 1, the Pelicans have 17 match-ups with conference foes, but they will have to overcome some key injuries.

The loss of Holiday for an indefinite period is not a lethal blow to the team’s playoff chances, and he remains an obvious building block for its future. Gordon and Evans have been fantastic in combination together, and Austin Rivers continues to develop his outstanding natural talent. The losses of Smith, out for the season, and Anderson, out indefinitely, are perhaps bigger problems as their absence affects the flexibility of the defensive strategy employed in moving Davis around the post.

The Pelicans will have to rely on their young, big men. Luke Babbitt seems to be a possible offensive spark and also brings an added dimension of having an effective three-point shot. Using Alexis Ajinça at center and increasing his minutes could further allow the team to rotate Davis the way they would like. Ajinça is particularly intriguing as a future keystone for the team and for a playoff run this year. At seven-foot even and more than 260 pounds, he had been playing for Strasbourg in his native France for the prior two years before returning to the NBA with the Pelicans, and he shows excellent fundamentals and offensive moves. Leaning on former Kansas Jayhawks star Jeff Withey, another seven-footer, and journeyman Greg Stiemsma (nearly seven-feet as well) would allow the Pelicans to use a trio of big centers to fill the Jason Smith role, which would again free Davis to do as many things as possible.

Should they remain in the hunt long enough, one ace in the hole for the Pelicans may be the availability of NBA Development League star Pierre Jackson, whose rights the team owns. Adding Jackson could allow the Pelicans to insert one more offensive wrinkle just when they need it.