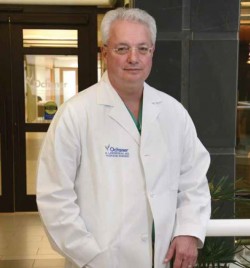 The Ochsner Cancer Institute has a new director: Dr. Rodney Landreneau, who returned to his home state of Louisiana last year to spearhead Ochsner’s groundbreaking work in cancer treatment.

Dr. Landreneau’s interest in treating cancer, and particularly lung and esophageal cancer, involves a personal connection. “My family has been afflicted with cancer through all of the generations,” he says. When he became aware of the Ochsner Cancer Institute’s need for a medical director, the surgeon knew it was a chance to make a difference to a huge number of people in the South — both those with lung cancer and mesothelioma, and those who might develop it. “I saw this great opportunity,” he says. “There’s really no cancer center in this area focused on treating mesothelioma, and secondarily, the cancer rate in Louisiana is among the highest in the country.”

Louisiana and Mesothelioma
Louisiana’s rate of mesothelioma — a malignant disease affecting the cellular lining of many of the body’s internal organs, and especially the lungs — is particularly high. Mesothelioma is known to be caused by exposure to asbestos: silicate minerals often used in industrial applications. Because of Louisiana’s high population of workers in industries that use asbestos, such as shipping and manufacturing, mesothelioma is a common cancer affecting the state.

In addition, Dr. Landreneau notes, Louisiana has a large smoking population. “A lot of folks have smoked in the past in this area,” he says. “Smoking results in increased risk of lung, stomach, bladder, skin and other types of cancer.”

A New Technique to Treat Lung Cancer
While at the University of Pittsburgh Medical Center, Dr. Landreneau was the first in the world to perform a minimally invasive lung cancer resection. He has already brought hyperthermic intraperitoneal chemoperfusion (HIPEC), a groundbreaking surgical treatment for cancer, to mesothelioma patients at Ochsner.

HIPEC involves debulking, or removing the mesothelioma tumor, and then placing draining tubes and perfusion tubes into a patient’s chest to create a fluid circuit. A heated chemotherapy solution is then pumped through the tubes and circulates through the chest, killing a much higher number of cancer cells than standard, traditional tumor removal alone. With HIPEC treatment, “The survival rate [of mesothelioma] has almost doubled among selected patients with favorable cell types that are cleared from the chest,” Dr. Landreneau says.

Plans for the Future
In addition to working with Louisiana State University Medical Center and Tulane University to help Ochsner Cancer Institute become a National Cancer Institute Designated Center, Dr. Landreneau wants to raise awareness of Ochsner as a premier resource for cancer care in the Gulf South.
“Our goal is to let the region know of the excellence at Ochsner, which has really been an unappreciated asset in the area,” he says. “Many folks in Louisiana and our metro area feel they need to go elsewhere for care — but coming here and looking at cancer care from the outside in, I can tell you that the quality of our services is second to none.”