Learn to Draw: Classes at Forstall Art Supplies put the paintbrush and the power in your hands. 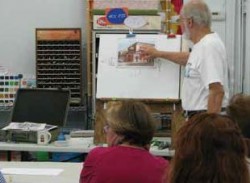 You don’t have to be a college student (or any age in particular) to take a drawing class. Forstall Art Supplies offers basic drawing classes on a rolling basis, for beginners who want to learn how to better sketch what they see.

The art-supply store also offers intermediate and advanced drawing classes, as well as acrylics instruction and a bimonthly figure drawing class (ages 18 and up). All classes start at $120, not including supplies. “We have everything from professionals, who have gorgeous sketches, to beginners,” says proprietor Paul Forstall, whose mother, Anathalie Forstall, opened the shop in 1976. “Most classes are from four to six weeks. The age range goes from 20 years old up to 75 years old.”
Don’t worry about your skill level, even if you’re just starting out. “We never, ever interject our opinions on what people are drawing,” Forstall says. “We keep it real simple. The best artist who’s ever lived had to start somewhere.”

Originally conceived as a commercial art supply store, working with local advertising agencies and department stores’ art departments, Forstall Art Supply changed its business model to cater to individual artists in the early 1990s as computer-based art began to replace hand-drawn work. Though the shop’s Calhoun Street location has been flooded three times, Forstall says the business will not be moving. “We’re going to stay in New Orleans,” he says. “We have big, big plans.” forstallartsupply.com

Durham, who goes by the professional name Hyena Hell, holds a bachelor of fine arts degree in printmaking from Tulane University. “I’ve drawn every day since I was 18 months old and have been drawing almost every day since,” she says. From large, striking mural work, to small, intricate comics and illustrations, her work often features stylized skeletons and other anatomical forms. “I’ve always been a very morbid, death-obsessed person,” Durham says. “For me, having an intimate and often tongue-in-cheek relationship with death and darker subject matter is a means of living with that.”

Why printmaking? “I’ve always been attracted to ephemeral art forms, such as flyers, comics and posters,” Durham says. “My interest in punk fan ’zines, underground comics and Xeroxed art led me to investigate the more egalitarian art forms.” She also chose printmaking for its democratic origins as a medium that was broadly available for public consumption.

“[Printmaking creates] things that are mass-produced and meant to be widely distributed to all sorts of people, as opposed to things that hang in a museum,” Durham explains.

In addition, the step of carving a printmaking plate or lithography stone affords Durham the sense that her work is complete. “It adds a second, more three-dimensional step in between the initial drawing and final product,” she explains.
Along with printmaking, Durham accepts commissions for painting, illustration and design work. [email protected]

“We wanted to host an event that would feature this unique New Orleans landmark while also showcasing unique, handmade arts and crafts made by local artists,” says Kati Kelley, events coordinator for the Lake Pontchartrain Basin Foundation. “Additionally, by hosting the arts and crafts fair at the New Canal Lighthouse site, we can bring awareness to the work Lake Pontchartrain Basin Foundation does, and raise much-needed dollars to continue our mission of preserving our lake and restoring our coast.”

Along with local crafters selling their wares, the fair will feature a raffle. “There is a little bit of something for everyone,” Kelley says. “Our vendors will be selling everything from high-end art pieces to unique Louisiana crafts. Shoppers can browse the booths while overlooking Lake Pontchartrain: one of the prettiest views in New Orleans.” Refreshments will be available, including snowballs and ice cream from NOLA Snow.

And it wouldn’t be a day on the lakefront without a little bit of water safety. “The event is linked with a Summer Water Safety day to help promote water safety with the upcoming summer months,” Kelley says.

The Lake PontchARTrain Craft Fair is free and open to the public. www.saveourlake.org