Fitness has been a lifelong focus for bodybuilder and trainer Kash Guidry. 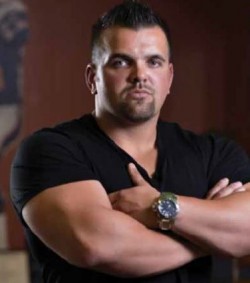 Kash Guidry grew up in the town of Jean Lafitte, La., and, on his eighth birthday, he received an action figure. “I couldn’t put it down,” he says. “There were muscles from his head to his toes. I wanted to look like that!” His interest in being a bodybuilder carried Guidry through middle school and high school football, and when he turned 17, he entered his first bodybuilding competition.

Now a bodybuilding contest preparation coach, Guidry works with some of the foremost bodybuilders in Louisiana and the United States, researching and implementing nutrition and fitness techniques that get prizewinning results.

On Staying Motivated: “My inspiration has changed over the years,” Guidry says. Though Arnold Schwarzenegger and other bodybuilding greats originally spurred him to pursue the discipline, Guidry’s motivation took a personal turn when he was 20 years old. Due to complications from blood clots and type 2 diabetes during an open-heart surgery, his mother became paralyzed. She later passed away. “I never want to go through what she did,” Guidry says. “Now, I’d have to say, my clients and competitors motivate me.”

His Fuel: “Nutrition runs the entire body,” Guidry says. “You can get your body to do whatever you want — you just [have to] know what food to give it at the right time!” His favorite food is steak, with pasta being a close second. “And, of course, when I cheat, it’s Mexican or Italian,” Guidry says.

Client Success Story: Guidry’s clients run the gamut of sizes, fitness levels and aspirations. He finds it difficult to choose just one example of a client reaching his or her goals. “There are so many!” he says. “I have clients with so many different types of goals. Some are obese and want to lose 100 pounds; some are what we call “skinny fat,” which means they are not overweight — [they] just lack lean body mass and have too much fat for how much they weigh! Others want to perform at higher levels in sports, marathon- or power-lifting, et cetera.”

Wise Words: It’s all related. “Your workouts are only as good as the food you are feeding your body,” Guidry says. “If you’re not eating right, you won’t get the body you want. Period!”