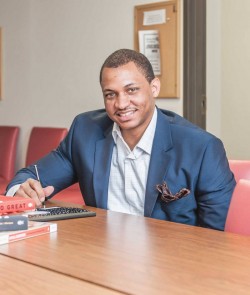 “One of my goals has always been to be how my father is in my hometown community,” Francis says.

When Francis was 12 years old, he began attending a football camp held by former New Orleans Saints player Van Jakes. During Francis’ four summers at the camp, Jakes became a mentor and friend to him, giving the young player advice and even making himself available for phone chats during the NFL season. Francis came to understand the depth of impact that mentorship can have on a young person. “He cared about the man he wanted me to grow into, more than me being a football player,” Francis remembers.

In 1995, Francis won a football scholarship to Tulane University and immediately embraced the New Orleans community. Though he thought he would leave the city when his NFL dreams didn’t come true, he couldn’t seem to tear himself away. “Things just kept me here,” he says.

One of those things was Francis’ work at local TV station WDSU, channel six, where he rose through the ranks from intern to associate producer. Through his work at WDSU, Francis got to know Pam Lyles and her husband, Jack, who both became his close friends and mentors.

Francis moved into the WDSU newsroom, where the everyday brutality of his work began affecting his life. “Dealing with violence, and murder, and mayhem and chaos … it was just such a conflict for me,” he remembers. “I was hearing the police scanner in my sleep.” Francis decided to leave the job — but, before he could, his producer suggested he become a mentor at Café Reconcile.

Becoming a part of the restaurant’s mission to help at-risk youth rise above generational poverty and cyclical violence was exactly what Francis was seeking. He joined the program side-by-side with its students to earn their trust. “I’m a Café Reconcile graduate,” he says. “I wanted them to see that I was willing to do what they were being asked to do.”

In 2004, Francis founded Blessed 26, a nonprofit organization, with the goal of teaching young people how to create success for themselves. The name comes from his Tulane football jersey number — instead of the No. 1 he was accustomed to, Francis received the seemingly random No. 26 when he joined the Tulane team. It was a lesson that things don’t always go as planned. “The ‘26’ represents that God’s plan for my life is absolutely none of my business,” he smiles.

Francis is careful to note that he doesn’t categorize Blessed 26 kids as “inner-city,” “underprivileged” or other names that could pigeonhole them. Instead, he describes participants by their positive attributes: namely, “determined.”

Through its Family Breakfast events and other outreach efforts, Blessed 26 gathers young people in New Orleans who lack guidance, resources or positive influences, and introduces them to people and opportunities that can help them grow. Francis sees his own life as a testament to mentors and friends who supported and believed in him — now, his main goal is to be that force in the lives of young people who really need it.

Francis has big plans for Blessed 26, including regional expansion with the help of other dedicated community members. “There’s more than one Kendal Francis out there,” he says. blessed26.info

983
previous Giving Back
next Colorful Calling