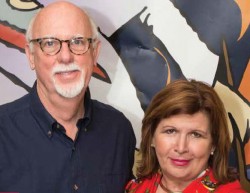 But when Monica Davidson’s husband, chef Pierre “Pete” Hilzim, named his now-classic creation after her, neither had any idea how popular it would become.

Davidson and Hilzim met in San Francisco; after getting married, they moved to Hilzim’s hometown of New Orleans. “That was my first experience of New Orleans in the summertime,” Davidson laughs. “I have to say, it was a shock.”

However, Davidson was born in Chile, and her cosmopolitan childhood — which included going to 10 schools in five countries, and speaking four languages — uniquely positioned her for life in New Orleans. “One of the things about traveling so much is that you really get a special appreciation of how cuisine here compares to cuisines all over the world,” she says. “This is really, really special food. It’s unsurpassed.”

Davidson holds a bachelor’s degree in linguistics from the University of California at Berkeley, and, when she and Hilzim arrived in New Orleans, she decided to earn her master’s degree in business. “Pete asked me to work with him during the summer, in between school years,” she says. “I told him that was a terrible idea, because people who are married should never work together: famous last words. I worked with him anyway, and I guess I got hooked!”

Kajun Kettle, Davidson and Hilzim’s business, originally focused on fresh pasta. In 1983, the first year the couple manned their Jazz Fest food booth, they weren’t allowed to serve pasta. “The oyster and fettuccine guy had the market,” Davidson says. She and Hilzim settled on a barbeque-shrimp and oyster dressing, which was delicious in spite of its labor-intensive preparation. “Peeling 1,000 pounds of shrimp with your bare hands is really kind of no fun,” Davidson says.

Soon, Kajun Kettle expanded its line to include sauces — and, one night, at a dinner party with friends, Hilzim created a cream-based sauce spiced with Creole seasoning and loaded with tender crawfish-tail meat. “He said, ‘I think I’m going to call it Crawfish Monica,’” Davidson remembers. “‘We probably ought to add it to our sauce line.’”

Hilzim’s suggestion turned out to be famous, indeed: After growing steadily every year since its 1981 home-kitchen origins, Kajun Kettle now occupies an 86,000-square-foot facility just west of New Orleans. As executive vice president of the company, Davidson oversees the creation, packaging and shipment of more than 150 different soups, sauces, marinades and specialty food items throughout the United States — not to mention preparing for Jazz Fest every year. “Jazz Fest is a huge part of what we do,” Davidson says. “There’s real camaraderie among all of the vendors there.”

Naturally, Crawfish Monica remains Kajun Kettle’s signature offering. Davidson says she’s committed to maintaining the dish’s quality, including chasing down impostors and imitators using its trademarked name. “We want to make sure it stays the same, and that people love it,” she says.

Along with her day-to-day work at Kajun Kettle, Davidson invests time in community service. “My focus, personally, is on helping educate young kids: mentoring, mostly in literacy and lifestyle in general,” she says. For seven years, she mentored a young girl through Each One Save One, a local nonprofit that marshals volunteers to support and guide New Orleans kids.

Davidson and her husband still work with Each One Save One, donating time and food to help raise awareness of the organization’s mission. “The need out there to help partner with kids in the inner city is so huge,” Davidson says. “The most surprising thing to me about it all [was that] I had no idea of what was just down the street from where I lived — how different the lives of some people in my close neighborhood are. I felt really lucky to have experienced that. It really changed my life.” The couple also supports New Orleans Artists Against Hunger and Homelessness, the Audubon Institute, the Louisiana SPCA and other organizations.

Though she doesn’t often get to put her language expertise to use at work, Davidson hopes to travel more … as soon as she can take the time off. “Travel gets in your blood,” she says. “When you’ve been doing it your whole life, it’s something you want to keep doing.”

767
previous Chaka Khan: Funks Up the Fest
next Singing Sensations