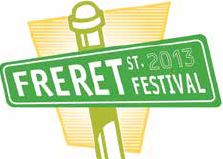 — celebrating what has become a thriving neighborhood — with more than 200 local arts and crafts vendors spread across nearly seven blocks of the “Freret Jet” corridor. This year’s festival includes music on five different stages from performers like Wild Magnolias, Mississippi Rail Co., Flow Tribe and Margie Perez. Of course, no New Orleans festival would be complete without fantastic local cuisine, not only from the stellar restaurants that line Freret Street, like The Company Burger, Freret Street Po-Boys & Donuts, and Dat Dog, but from other local eateries. Past festivals included eats from The Fry Bar, Meltdown Pops, Boucherie and Woody’s Fish Tacos. freretstreetfestival.com

April 10-13
Probably the most talked-about, well-attended free festival of the year — the French Quarter Festival — will be celebrating its 31st anniversary with food, music and fun. This year’s musical lineup includes bands such as Bonerama, Gal Holiday and the Honky Tonk Revue, Dr. John & The Nite Trippers, Flow Tribe, The Pfister Sisters and Waylon Thibodeaux. The festival also features tastes from some of the best restaurants in the city, including Galatoire’s, Muriel’s Jackson Square, Three Muses, The Joint, Boucherie and GW Fins. fqfi.org

April 11-13
The Ponchatoula Strawberry Festival is held every April in Ponchatoula, just north of Lake Pontchartrain. This is your chance to revel in food, music, dancing and fresh strawberries right off the farm. Since 1972, the festival (now in its 43rd year), has been attracting both young and old alike to its annual party to recognize and honor the tireless dedication of the regions’ farmers and, of course, to celebrate the Louisiana state fruit — the plump, juicy, sweetness of a good ol’ ripe Ponchatoula strawberry. lastrawberryfestival.com

Starting in 1979 with 902 participants, the Allstate Sugar Bowl Crescent City Classic has long been a New Orleans tradition and leading fitness event in Louisiana. Described as the original “party race,” the 10K is held the Saturday before Easter and attracts more than 20,000 runners, walkers and party-goers each year. The Crescent City Fitness Foundation — a not-for-profit entity whose sole purpose is to promote health, fitness and a better lifestyle for the people of the New Orleans metropolitan area — produces all CCC events. ccc10k.com

April 21-27
The annual Zurich Classic is a four-day event held at the TPC Louisiana, featuring world-class players, nonstop PGA Tour action, and the kind of food and fun you can only find in New Orleans. Since becoming the title sponsor in 2005, insurance-provider Zurich — along with the Fore!Kids Foundation — has raised nearly $8 million for more than 40 charities (serving more than 200,000 children in need throughout southeastern Louisiana). zurichgolfclassic.com

April 25-May 4
With 12 stages of virtually every style of roots music, the New Orleans Jazz & Heritage Festival presents one of the entertainment world’s most diverse musical lineups, including its unparalleled showcase of Louisiana’s unique culture. This year promises to be a banner year, with performances from Santana, Public Enemy, Robert Plant and the Sensational Space Shifters, Phish, Robin Thicke, Eric Clapton, Christina Aguilera, Trombone Shorty & Orleans Avenue, Big Sam’s Funky Nation and more! Hundreds of thousands of fans flock to this seven-day event every year to experience what has been called America’s best festival. Join in! nojazzfest.com