Home IN THIS ISSUE The Run of Your Life
IN THIS ISSUE
SPORTS
April 1, 2014 Paul Wegmann 0

The Run of Your Life

The Crescent City Classic brings tradition, character and passion for the world’s oldest sport to New Orleans every spring. 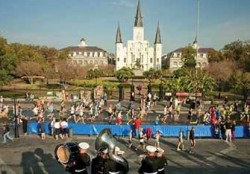 Spring in New Orleans annually brings Mardi Gras, crawfish, St. Patrick’s Day parades and festivals — and right in the midst of it all, on April 19, just between French Quarter Fest and Jazz Fest, is the Crescent City Classic. This 10k (6.2 mile) road race brings in a haul of internationally ranked runners; dedicated athletes of all speeds, shapes and sizes; and, of course, a host of local characters numbering in the thousands. In fact, the Classic habitually draws more than 20,000 participants, as well as a similar number of spectators along the way. One special aspect of the Classic is its course through historic neighborhoods. It starts on Poydras Street in the Central Business District; winds its way through the Vieux Carre on Decatur Street; then ventures into Mid-City via Esplanade Avenue, where the race cuts a straight line through the heart of Faubourg St. John across the Bayou. Finally, it winds through City Park and concludes with a Big Easy festival in Tad Gormley Stadium.

Many joggers hope to become runners, and there is a distinction. Runners completely run and finish races — whether concerned about their time or not — and, for thousands of locals, the Classic has been their graduation ceremony, but anyone with such hopes should consider their goals and strategy before seeking to do so. No matter what, preparation is a key to three main goals: finishing, enjoying yourself and avoiding injury. Before training, participants should start by obtaining the proper equipment, in the way of shoes and other gear, at the Crescent City Classic Health & Fitness Expo, which takes place before the race on April 17 and 18 at the Hyatt Regency New Orleans. A common training guide for the non-elite athlete includes gradually increasing from one-half mile in mid-January to six miles in March for walkers, and from one mile to six miles during the same period of time, with several days of rest in between, for joggers.

Once the race begins, it is important to start slowly. Do not let the excitement and early going drive you into believing that you will be setting a world-record time. There will be thousands of people leaving little room to maneuver anyway; the best tack is to begin at a slower-than-normal pace, rather than striving for a speed that you will not be able to maintain. Once the crowd loosens up, it is possible to find a normal and comfortable stride. The next stage is to find a pack of runners hitting a similar pace, and then tuck right in with them. Running with a pack encourages all to pull each other along and keep stride, but do not restrain yourself from either running ahead or dropping back according to how you are feeling. However, running with a group is almost always a better way to keep your head in the race and maintain focus.

The course itself is among the most interesting of any race in the nation or even the world. It offers benefits, like beautiful scenery (and especially the cool shade of oaks along Esplanade Avenue), but also possible challenges, like potholes, neutral grounds and countless distractions (such as costumed spectators offering free beer). Psychologically, aside from all the fun that the Classic can provide, if your goal is to finish the race (and to do so efficiently), the best tactic is to drive the course map in advance and to plot out mileposts along the way that will allow you to track your progress mentally while running. As you approach the end, likely after the corner of Broad Street and Esplanade Avenue, it will be best if you have conserved your energy and strength. This is especially true because almost every runner alongside you will be hurting, and they may not have taken the same precautions or shown the same discipline. The key at this juncture is to not succumb to fatigue — but rather to feel fresh and finish strong — by using a final reservoir of energy to surge past the more tired runners. As you enter City Park, it is about perspective and feeling good about finishing the race. You should have a sense of passing others (not dropping off) and of sprinting (not being complacent).

At the finish line, check your time — if only because it will mean setting a personal benchmark, a way of telling yourself that you will be running another race in the future. It is then that you will have graduated as a “runner.” The race’s conclusion will lead you into the stadium, where a classic New Orleans festival will be underway, replete with beer, beverage and food vendor tents, and live music by Bonerama and Big Sam’s Funky Nation.

If any further incentive is needed, runners can choose to run for others by joining the Run For It program, which is the official charity program for the Classic. One such charity partner is the Louisiana SPCA, which features its own Run For Spot package — whereby participants can help the city’s needy animals while also receiving many benefits along the way, such as free registration, and pre- and post-race gathering spots with refreshments and private facilities.

532
previous Woman on a Mission
next Right Direction