The Bond of Love 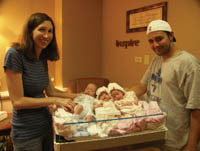 As the clock struck midnight on March 10, teams of emergency neonatal physicians and nurses rushed to East Jefferson General Hospital. Within about an hour of being dispatched, teams were ready and in place to deliver premature quadruplets. Resuscitation carts, medical equipment and individual rooms were reserved to care for each baby upon delivery.

For Nicole and Daryl Richard, this was the moment they had been waiting for. After a very difficult pregnancy, which required more strength and dedication than perhaps they knew they had, the delivery was a mix of triumph and tragedy, elation and sorrow. It had been a journey they had traveled together, with family, friends, physicians and medical personnel at their side. As this journey ended, another journey was beginning.

After having trouble getting pregnant, Nicole and Daryl sought treatment to help stimulate pregnancy. They were told the odds of becoming pregnant from the follicle-stimulating treatment Nicole received were about 30 percent. Despite these odds, they soon received the news they’d hoped for—”you’re pregnant!” What they didn’t quite expect to hear, however, is that their 2 percent chance of having quadruplets was also realized.

As ecstatic as they were, Nicole and Daryl, along with their physician, Dr. Amy Truitt, and their perinatologist, Dr. Ann Chau, knew that multiple-birth pregnancies could be difficult and needed special monitoring. The average length of pregnancy for quadruplets is approximately 28 weeks, compared to a normal 40-week gestation.

“There are certain risks of having multiple births and things you need to look for,” says Dr. Truitt, an Ob/Gyn with East Jefferson. “We have to carefully monitor for pre-term labor and pre-eclampsia. Also, the mother needs to take in more calories and protein, and we are always adjusting the intake.”

On January 3, at 17 weeks, it was determined that Nicole would need to be admitted to East Jefferson to have a surgical procedure to reinforce the cervix to avoid early delivery and to go on bed rest. While she had some ability to get out of bed at that point, at 23 weeks even that ended and she was restricted to the bed only, with her feet elevated to take pressure off the cervix. Adding to the difficulty of bed rest were bouts of vomiting and the need for intravenously administered nutrition.

The night of March 9, one of the amniotic bags developed an infection, causing the baby and mother to become septic. An emergency cesarean section was scheduled. The neonatal teams raced to the hospital, knowing that an infection could jeopardize Nicole’s health, as well as the health of the four babies. After 27 weeks of an unbelievably stressful pregnancy, it took only three minutes for Nicole and Daryl to welcome their children into the world. The first was born at 1:27 a.m. and the last at 1:29 a.m. Darah was 1 pound 13 ounces; Delilah was 2 pounds 1 ounce; and Daryl (D.J.) was born 2 pounds 6 ounces.

As joyous as it was, sorrow also filled the air because Dean, the baby whose amniotic bag had become infected, was stillborn. Nicole, who was not awake for the delivery, was told later about the outcome of the delivery. A chaplain helped console her and Daryl, and they later held a private ceremony for Dean. “It was rough,” says Nicole. “It was very bittersweet because we had three children we had to be strong for.”

For the next nine weeks, Darah, Delilah and D.J. remained in the Neonatal Intensive Care Unit (NICU), where they were under constant supervision. All medical needs were assessed and a plan devised to make sure they progressed on schedule and added the proper amount of weight. They were fed through a tube until they could begin sucking through a bottle.

Delilah suffered a minor setback and had to be transported to Children’s Hospital for two weeks after doctors caught a potentially life-threatening infection. Although it was thought she would need surgery, antibiotics were able to control it and she was reunited with her siblings at East Jefferson. Meanwhile, Nicole and Daryl were going back and forth to the hospital multiple times a day, and across the city when Delilah was at Children’s. Nicole also needed physical therapy stemming from the pregnancy and extended bed rest.

Since they were in the hospital every day, Nicole and Daryl developed a relationship with doctors, nurses and staff. They even were even able to counsel and provide reassurance to other NICU parents. They could see the concern on the faces of other parents and became a resource for those parents needing advice.

“We had been at the hospital so long, we felt we could help others know that the staff was here for them and that their baby was being taken care of,” says Daryl. “You could see how worried they were. In that time we saw plenty of parents and babies come and go, so we were doing what we could to help while waiting for it to be our turn to leave.”

Finally, their day had arrived, and they were told to start making plans, because their babies were going home. Prior to discharge, Nicole and Daryl were able to spend their very first night with their children in a new, specially designed room at East Jefferson called the First Night Room. “NICU families don’t have the opportunity to spend full days or nights with their infant,” says Judy Vollenweider, RN and NICU supervisor. “It is an opportunity for them to spend a night in the hospital with their baby, but in a setting that resembles home.”

Parents are often extremely nervous to take home a newborn that may have special needs. The First Night Room, built from the generous donations of a number of Rotary Club chapters, helps alleviate as much of that stress as possible. In addition to the bonding experience, it also helps the parent get comfortable with the needs of the baby, understand the medical equipment and medicines required when they get home, and gives them the opportunity to care for the child, all in a controlled environment in the hospital. Nurses and medical staff are there to help guide them as needed and are a reassuring resource throughout the night.

“The families receive guidance and encouragement throughout the night and are overseen by an NICU nurse. This ensures a successful transition home,” says Vollenweider. “An individualized home plan is devised for technological assistance with any equipment if necessary. At this point, we also provide basic neonatal care, safety precautions and administration of medicines, while the nurse can identify any needs for emotional assistance.”

For the Richard family, it was a wonderful night together and one they had long desired. Their bonding began, and they could finally feel togetherness. What they also felt was something that all new parents feel: tiredness from being up all night changing diapers and routine feedings. However, it was a tiredness they had looked forward to for a long time. “When on bed rest, my room was next door to the First Night Room as it was being built,” says Nicole. “I couldn’t wait to be able to use it. It was very nice. We are excited to be able to go home, especially as the kids are going home with no monitors or equipment.”

Their new journey began as they walked out the hospital doors. Darah increased her weight to 4 pounds 10 ounces; Delilah to 4 pounds 5 ounces; and D.J. jumped all the way to 5 pounds 9 ounces. All were able to go home at the same time. They say everyone looks good, and they have a lot of doctor appointments to make for follow-up care.

What does the future hold? Nicole returned to her job as a pharmacist. Daryl is taking a year off from his telecommunications position with the New Orleans School Board and will say home with the kids. Even Nicole’s mother was able to take a year off from her job to lend a hand.

“I think we will be fine,” says Daryl. “We have plenty of help. Maybe more than we need, but we’ll take it all.”

194
previous Believing in FATE
next Being Well