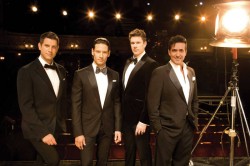 After touring Asia earlier this year, the international, multiplatinum quartet Il Divo embarked on its spring tour of the United States and Canada for “A Musical Affair: The Greatest Songs of Broadway Live.” On May 6, the Saenger Theatre will play host to the handsome singers, who comprise the first and most successful classical crossover group today. Il Divo’s inaugural performance in New Orleans will feature the talented foursome delving into the world of Broadway songs for the first time — in conjunction with their sixth studio album, “A Musical Affair,” a compilation of musical theater tunes that the group delivers in its signature romantic and emotional style.

“We’ve been getting a really great response from the fans about the new album,” says David Miller, the American tenor of the Il Divo lineup (which also includes fellow tenor Urs Buhler of Switzerland, baritone Carlos Martin of Spain and pop artist Sébastien Izambard of France). “The feedback has been phenomenal; people have been calling for a second volume of musical theater, and I think it’s because the four of us bring a certain amount of drama to the music we do, and we always add our stage experience and our classical training, and give the songs opera-esque endings.”

Il Divo’s repertoire of popular songs culled from theater, already dramatic in nature and mainly written for full-throated, operatic-type singing, makes for perfect material on this particular tour. Songs will include veritable classics, such as “Some Enchanted Evening” from “South Pacific,” “Tonight” from “West Side Story,” “Memory” from “Cats” and “Can You Feel the Love Tonight” from “The Lion King.” “When we’re singing music that’s meant for us to sing, it takes our voices to another level — so everyone is having a great time listening to it,” Miller says. “We really wanted to show that Il Divo [could] go to musical theater.”

In this world of inevitable technology, Miller is a dedicated proponent of the communicative power of the human voice, which is illuminated proficiently by Il Divo’s hybrid brand of operatic pop. “All four of us feel that way, but it’s always been my No. 1 priority to communicate in an authentic way using an emotional component,” Miller says. “Getting sucked into this technical existence makes us more disassociated from our emotions, and is part of the reason people fly off the handle and bring AK-47s to class, because no one is communicating directly to each other anymore; it’s all via text and 140 characters. No one even really knows how they feel anymore, so, when we sing our music, it awakens that emotional persona in people, which is becoming more and more dormant.”

The singing sensations have definitely tapped into something: Although it’s hard to find an Il Divo song on the radio, the group has sold more than 26 million albums across the globe. “We’re entirely too operatic and dramatic, with all these massive endings, for easy-listening radio stations,” Miller says. “The music kind of requires attention; it’s constructed in a way that evokes an emotional progression that you need to be able to sit still for, but it’s pop music, so it’s not played on opera stations. We fall between the cracks and people do seek it out. One of the greatest compliments we get from the fans and younger people is that because we’ve presented the classical voice in a non-classical way, we’ve made them curious about opera and made it accessible.”
Filipina singer and actress Lea Salonga, best known for her Tony Award-winning performance in “Miss Saigon,” will accompany Il Divo on the upcoming tour. “It’s a powerful combination, because it brings the yin to the yang when you have a female voice onstage — like when we went on tour with Barbra Streisand in 2006 and joined her onstage,” Miller says. “It brings a balance and a completeness to the sound, and it has a bigger impact than when it’s the four of us alone.” Salonga will be handling some of the female vocals found on “A Musical Affair,” which features duet partners such as Streisand, Kristin Chenoweth and Nicole Scherzinger. “She’s fantastic,” Miller says. “The songs on the album were for radically different voices, and Lea handles them all with absolute ease and grace.”

Miller visited New Orleans in the late ‘90s before he joined Il Divo and is looking forward to returning. “It is really a different part of the U.S.,” he says. “It’s like the Vatican is not like a part of Italy — New Orleans is so radically different. It’s amazing in so many ways, like the gorgeous architecture and the glass shards on top of the brick fences around the homes. I didn’t get a chance to sample the cuisine when I was here last time, so I’m excited about that — because I’m a huge foodie. My first instrument was the jazz trombone, and I’m a big jazz buff, so New Orleans is going to be fun. And to be coming to the Saenger Theatre after it has been restored to perform for the first time is exciting, because most of the people might be experiencing Il Divo for the first time. We’re really excited.”

This year, Il Divo celebrates its 10th anniversary, after the group was handpicked by music mogul Simon Cowell for his record label, Syco Music. “To sum up the last 10 years in a single word, I’d say it feels ‘unexpected’; we figured it’d be a flash in the pan, we’d maybe do an album or two,” Miller admits. “But then this whole subgenre of classical crossover became a real thing. The original opera boy band was The Three Tenors — they kind of opened the doors, and we came and kicked it down — and other groups have cropped up. There’s actually a Russian group now. We started out struggling to find the balance between pop and classical, trying to make something we’d be proud of, always just keeping our heads down and focusing on what was in front of us that day, and then 10 years are gone,” Miller says. “It’s like, OK, wow!”