A leading resource for hereditary breast and ovarian cancer offers support, education and so much more. 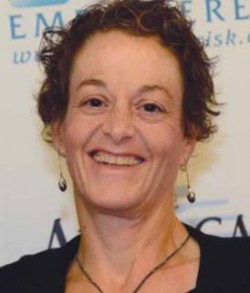 Sue Friedman, founder of Facing Our Risk of Cancer Empowered (FORCE), never planned to head the only national nonprofit organization that focuses on educating and supporting women at risk of hereditary breast and ovarian cancer.

But when Friedman was diagnosed with breast cancer at just 33 years old, she embarked on a harrowing journey that would cause her to take a hard look at the way the disease was diagnosed and treated. After a mastectomy and breast reconstruction, Friedman thought she was cured; when her cancer returned, she underwent a prophylactic mastectomy and matching reconstruction on her other breast; radiation; chemotherapy, and removal of her ovaries.

It turned out that Friedman possessed the BRCA2 gene mutation, linked to a 40-to-60 percent chance of developing breast cancer. “Nobody had really pegged me as being high-risk,” Friedman says. “I didn’t know anything about advocacy or doing my own research.” Despite treating her for an earlier, benign tumor, Friedman’s doctors had not taken her family history or administered tests that would determine her risk of developing breast cancer.

“I realized that I didn’t get the best care that I should have,” she says. “I thought, ‘How on earth is someone who doesn’t have a medical background going to navigate this?’”

After spending time searching for online support communities for BRCA-positive women, Friedman realized that there was a huge gap in the support resources available for women who were at risk of developing breast cancer, but had not yet been diagnosed. “High-risk women without cancer had nowhere to go [for support],” she says. “I realized that ours was a community that needed unifying, so that we could advocate for our own better options.”

In 1999, she started a message board for breast cancer survivors and “previvors” — a term the group coined to describe women facing a high probability of developing cancer. This group became FORCE, and five years after founding it, Friedman left her veterinary career to run the organization full-time. Now, FORCE is a leading source of education and support for breast and ovarian cancer previvors and survivors everywhere.

FORCE works to ensure that women who may be at hereditary risk of developing these cancers have the information they need to face the disease from an educated, supported perspective. The organization provides face-to-face outreach and support in 49 communities throughout the United States, and it hosts the annual Joining FORCEs Conference — an international gathering for women and families affected by hereditary breast and ovarian cancer.

In 2002, FORCE became the first organization to offer a toll-free, national helpline — staffed with genetic counselors and supportive volunteers — to women concerned about hereditary breast and ovarian cancer. The organization recently received a grant from the government-funded Patient-Centered Outcomes Research Institute, which will help FORCE develop a patient-centered health network. “The difference with patient-centered research is that patients get to be involved every step of the way,” Friedman explains. In addition, FORCE trains “research advocates” to work on behalf of the hereditary breast and ovarian cancer community.

In its efforts to build an involved, educated community of survivors and previvors, FORCE also fights media sensationalism and misrepresentation. “We do a lot of review articles on the latest research,” Friedman says. “We make that research accessible and understandable to laypeople. … The media doesn’t always translate the actual research results the way that they were intended.”

Asked whether the experience of running FORCE has been healing for her, Friedman answers carefully. “Yes and no,” she says. “I never set out to start an organization. It wasn’t in my life plan. I ended up giving up a career that I loved to do it, because there was such a need. But I’d do it again in a heartbeat.”