Feel good about eating your next doughnut. 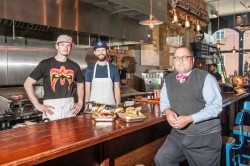 Here’s a recipe for surefire success: Take one part personal challenge; add a longing to do meaningful work in your community; mix with a dormant business model that can be reworked to serve your needs; and shake it all up. That’s how Crossroads NOLA got started — and the nonprofit is using its vision to help foster children in the greater New Orleans community find loving homes.
Crossroads was originally founded in 2004 as Baptist Crossroads Foundation, a faith-based initiative to help build housing for families in need. “We partnered with Habitat for Humanity and purchased 10 lots that summer,” explains Kim Carver, an active member of Baptist Crossroads at its outset. In the wake of Hurricane Katrina, the organization ended up building almost 10 times the number of houses it had planned to build. “We had this delivery system already in place,” Carver says. “All of that became Musician’s Village — and it became a very hopeful place in the city.”

A few years later, Carver and his wife had just adopted their first child, and were experiencing the challenges and rewards of raising her. At the invitation of Sen. Mary Landrieu, who is a major proponent of foster care and adoption, the Carvers attended the 2012 Angels in Adoption Gala, held by the Congressional Coalition on Adoption Institute. The black-tie affair marked a turning point in the Carvers’ lives and careers.

“Everybody we met at this function was doing revolutionary things with their lives and really altering the world,” Carver says. “We were so challenged and inspired to do more with our lives.” The issue hit close to home for the Carvers, who believe the church has a responsibility to care for children who need parents. They have two adopted daughters, and they are in the process of adopting their third child, whom they have fostered for a year. “Where do you eat Thanksgiving dinner? Who walks you down the aisle when you get married?” Carver asks. “It’s very emotional for me to think that kids, from no fault of their own, are somehow unadoptable.”

The couple had friends that had also faced difficulties in the local foster care and adoption system — and, as they learned more about the shortage of available foster homes in and around New Orleans, they decided to do something about it.

Baptist Crossroads had long since completed its partnership with Habitat for Humanity and fulfilled its original mission. With the Carvers’ help, the organization changed both its focus and its name. As Crossroads NOLA, the nonprofit began focusing on recruiting foster families from churches and other faith-based organizations. Through training foster parents, enlisting an on-staff social worker to pay home visits, and other services, Crossroads supports the state of Louisiana’s adoption and foster care programs. As a board member and treasurer of Crossroads NOLA, Carver plays an integral part — and, in 2013, the organization was honored as an Angel in Adoption at the very same gala he and his wife had visited as guests the previous year.

Now, Crossroads is adding another hit ingredient to its recipe: sugar. The organization’s new partnership with District Donuts centers on the creation of a food truck. Through parent company TurnChange, which aims to “turn profits and change lives,” District co-owners Aaron Vogel, Chris Audler and Stephen Cali will combine delicious doughnuts with social reform. “We banged our heads against the wall … trying to do this socially conscious restaurant,” Audler says. “None of us are directly involved with fostering or adoption. We just have a heart for it.”

One of the ways the Crossroads-District collaboration brands itself is “We Don’t Serve Kids,” a play on words that provokes attention while bluntly stating the problem the venture seeks to address. Along with raising awareness through branded plates and napkins, the food truck will employ local foster kids who are aging out of the foster system. It’s a clear-cut way for Crossroads NOLA to expand its mission beyond the faith-based community.

“New Orleanians are giving, loving; they’re charitable and they love to eat,” Carver says. “If you find a way to marry those, it’s a success story.” wedontservekids.org