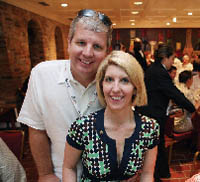 Five years ago, Ann Tuennerman brought together some cocktail fans and friends for an afternoon event she called Tales of the Cocktail. Today, Tales is a five-day extravaganza attended by thousands of fans from around the world, and a major event on the city’s July tourism schedule. (This year’s convention will be held July 16 to 20; for registration, visit www.talesofthecocktail.com.)

In 2006, Ann met restaurant executive Paul Tuennerman, and they married shortly thereafter. Today they’re known as Mr. and Mrs. Cocktail on their Saturday afternoon radio show on WISTAM, and they work to promote the city’s hospitality industry year-round. Best of all, though, they’ve managed to preserve Tales of the Cocktail. No matter how large and professional it’s gotten, it still feels like that warm, casual gathering of friends that Ann planned in 2003.

NOL: How did you two meet?

Ann: Through some mutual friends in February 2006. I’d just gotten back to New Orleans in January [after Katrina], and he’d just been transferred to Baton Rouge. Our third or fourth date he was coming into New Orleans, and he said, “Pick a place to have dinner.” Our plans fell through, so we went to Port of Call. The next day he went to his office and they told him, “She’s taking you to all the right places!”

Paul: She invited me to go to Endymion that Saturday—it was canceled because of rain that year. I was fairly new to New Orleans and was still going through my indoctrination. We went to Napoleon House and Giovanni’s and had a great afternoon.

Paul, where else have you lived?

Paul: I’ve lived in Southern California, Seattle, Tampa–St. Pete, Fort Lauderdale, Virginia, Maryland … my move here was my 17th move! I wanted to get back to the Gulf of Mexico.

Ann, how did you go from event planning to the cocktail world?

Ann: I’ve always had this entrepreneurial spirit. With my background being special events and promotions, I started a cocktail walking tour and the idea of Tales of the Cocktail came about to promote the first anniversary of the cocktail tour.

I love the community, and now I’m trying to learn as much about the hospitality business as the event-planning side of the business. It’s like dining and drinking and caring about those things is in our DNA here. As somebody who’s lived here my whole life and is passionate about New Orleans, I love to promote history to locals or visitors.

I feel so personal about Tales of the Cocktail. All the attendees are like my guests. Locals loved the project first. Now L.A., New York and California are our top draws. But we have people coming from Australia—in fact, a guy wrote us and asked us to help him get a visa for the convention!

Did you do it?

Are there any other radio programs in the U.S. dedicated to cocktails?

Ann: Not really. There’s a piece of a show on Sirius Radio on Martha Stewart’s network. We’ve been doing ours for two months. There are some other great cocktail towns, but New Orleans is the perfect backdrop for that.

What are some other great cocktail towns?

Ann: San Francisco, Chicago, New York; they each have their own style. Next year’s Tales of the Cocktail is going to have salutes to the cocktail scene in other cities.

Paul: San Francisco and New York, obviously. I was quite impressed with Chicago. I was in Atlanta recently, and this whole resurgence of the classic, handcrafted cocktail there is brand-new.

Ann: When I just graduated from college I went with four girlfriends to Cancun one spring. I came back from that trip and I didn’t even have a voice! You know, at our wedding, we had only 24 people and we had different Champagne cocktails with every course. I’d gotten the recipes from a 1934 Times-Picayune Creole cookbook.

What’s your preference when it comes to classic cocktails?

Paul: I have a strong love for the Sazerac, but I’ll gravitate towards anything with rum.

Ann: He’s really enjoying Pisco Sours, which is a good refreshing cocktail. Or a really good Aviation. We have Sazeracs in the fall, or a Hemingway daiquiri.

Okay, Paul, since you’re new to town: red beans or a muffuletta?

Paul: Dogs. If you had one night and one cocktail left to drink, what would it be and in which bar?

Ann: I’d hit as many places as possible … but I wouldn’t drive.

373
previous Pride of Place
next Your Go-To Guy