Dr. Ahmet Bedestani was born in Ankara, Turkey, and he moved to the United States with his family when he was just a toddler. 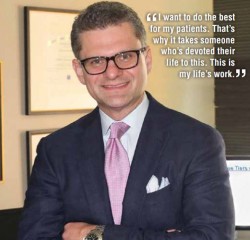 Living in the heart of New York City, he didn’t have a lot of places to play. “I watched a lot of TV and movies,” Dr. Bedestani says. “Other kids were impressed with superheroes, but I always gravitated toward physicians, for some reason.”

Though Dr. Bedestani was interested in medicine, he first pursued molecular biology. But while he was working in pharmaceutical research, something happened to change his focus. “I was driving home one day, and was involved in a traffic accident,” says Dr. Bedestani, whose left foot was badly injured in the crash. “I was taken to the hospital, where lots of work was done — to put it lightly.” Graft after graft of bone and skin failed, and specialists recommended amputating his foot.

Before agreeing to the amputation, Dr. Bedestani sought one last opinion from Dr. Sum Tran, a physician whom he saw as a hero. “He had actually gone into the community after the 1994 Northridge earthquake [in Los Angeles] and helped people, gratis,” Dr. Bedestani says. “He took one look [at my foot] and said he could fix it.” Dr. Bedestani was so inspired by Dr. Tran’s confidence and skill that he decided to finally pursue his interest in medicine.

After graduating from Ross University School of Medicine, Dr. Bedestani began his residency in obstetrics and gynecology at Mount Sinai Hospital in New York City. This was where he decided to focus his career on female pelvic medicine and reconstructive surgery. “Here, you have the time to really plan your surgeries and combine science, experience and skill with a bit of artistry, to really have a profound impact on someone’s life,” he says.

Less than two days after completing his medical residency in 2007, Dr. Bedestani was on his way to New Orleans for a three-year fellowship in female pelvic medicine at Louisiana State University Health Sciences Center.

Day-to-Day Practice
As a specialist in urogynecology at East Jefferson General Hospital, Dr. Bedestani is committed to improving his patients’ quality of life. “I’m very passionate about it, and my office is open to any kind of patient,” he says. “If a patient walks in my door, they get my full attention. I will deliver the best treatment plan to them, based on scientific data — and, of course, experience. I want women to know that there are people out there specifically to help them.”

The doctor also keeps current with the latest advancements in his surgical field, including the use of groundbreaking robotic surgery techniques. With robotic assistance, Dr. Bedestani works precisely to restore a patient’s natural pelvic anatomy and function, minimizing pain and decreasing recovery time. “There’s been an incredible metamorphosis,” he says. “I have come to do a lot more robotic work. I’m really able to combine the best of both worlds through a robotic, minimally invasive approach.”

Dr. Bedestani notes that his patients are often concerned with when they will be able to resume their normal lives after surgery. “Women of today have so many balls in the air to juggle,” he says. “If they’re going to take time out of their lives to commit to a treatment plan, they want a high level of certainty that they’ll never deal with that problem again.” He aims to provide that certainty to every patient.

In 2013, the first year that board certification in female pelvic medicine and reconstructive surgery was available, Dr. Bedestani became board-certified. “I want to do the best for my patients,” he says. “That’s why it takes someone who’s devoted their life to this. This is my life’s work.”

PHILOSOPHY
My job is to navigate all of the information, technology and data out there in the realm of pelvic medicine and reconstructive surgery. I deliver that to the patient in a way that they can understand, that meets their needs, so they can make appropriate, informed decisions in their treatment plans.