If there’s something you need to know about real estate, Arthur Sterbcow is the man to ask 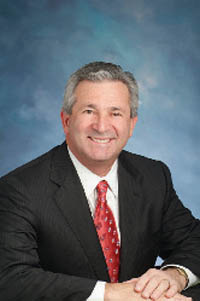 When anyone in the media wants a comment on what’s happening in the New Orleans real estate market— whether it’s a local media outlet, the New York Times or the BBC—the first person they turn to is the president of Latter & Blum, Arthur Sterbcow. For his part, Sterbcow doesn’t mind being thrust into the role of expert on all things real estate, but he doesn’t feel as if he can take all the credit, either.

“It’s not that I have more insight into local real estate than anyone else does,” he explains from his office in the Warehouse District. “It’s just that I know who to talk to—my agents.”

If this is the case, Sterbcow should at least take some credit for cultivating his cadre of knowledgeable real estate agents and for his role in growing Latter & Blum, which is the largest real estate company in the Gulf South and the 38th largest in the country. In 2007, it boasted more than $2 billion in sales. Agents want to work here, and Latter & Blum hires only 10 percent of the real estate agents who apply.

“We look mainly for people skills,” says Sterbcow. “The technical skills we can teach. With people skills, either you got them or you don’t.” Advanced technical tools, however, are an important element of Latter & Blum’s business, primarily because they free up agents’ time to get out in the field. The company has always been an early adopter of new technologies. According to Sterbcow, Latter & Blum was one of the first agencies to put listings on the Internet and use videoconferencing. By next year, Latter & Blum will have phased out all of its fax machines, which, says Sterbcow, are “as antiquated as a buggy whip.”

Naturally, Sterbcow used to be a real estate agent himself, although he first planned to be a doctor. While taking pre-med courses at the University of New Orleans, he worked as a scrub nurse, delivered a baby in the middle of the night at Touro Infirmary when no doctors were around, and tended the psych ward at Charity Hospital for extra cash. In the meantime, he married at age 20 and sold real estate part-time to support his young family. Real estate pulled him in. “It came easily to me. I loved meeting so many people, and even when I wasn’t working, I found everyone enjoys talking about real estate,” he says. “Eventually, I had to choose a side.”

Even though he is no longer an agent, Sterbcow obviously still has the people skills needed to excel in his industry and to be an effective manager. He has a warm smile and a hearty handshake, a way of expressing blunt opinions in a disarming manner. The Sterbcows have two grown sons, one of which is a real estate lawyer who focuses on highly technical transactions. “I don’t know what he’s talking about half the time, and I know a little about real estate,” Sterbcow jokes.

One would think that Sterbcow, having the cream of New Orleans homes to choose from, would live inside the city, but he and his wife actually reside in Abita Springs on the North Shore. This location makes sense, however, because it’s central to Latter & Blum’s far-flung operations. It’s also about halfway to Baton Rouge where the company owns the firm C.J. Brown, acquired in 1995.

In New Orleans, Sterbcow says the market is unique because of the city’s old housing stock and the fact that people are so attached to their homes. While the national foreclosure rate was over 1% for 2007, it was just 0.25% in New Orleans. New Orleanians see their homes as investments and places to live, not as the equity escalator that crashed elsewhere in the country.

The fundamentals of New Orleans real estate remain solid, according to Sterbcow. The city is being buoyed by an enormous construction boom, even if the effects on the city at large may not be immediately noticeable. In general, post-hurricane reconstruction is reinvigorating many neighborhoods, and while other neighborhoods remain in bad shape, Sterbcow likens the situation to a wound that heals from the healthy tissue inward.

Of course, New Orleans still has plenty of challenges in front of it. The insurance situation has improved with a dozen new providers starting to write policies this July. But rates will only come down significantly if and when the levees are up to snuff. “If the levees were in as good shape as the Corps wants us to believe, the insurance companies would have already lowered rates. They’re the ones who ultimately assign risk,” says Sterbcow. “They’re waiting until the plans that are in place are completed and vetted.”

While he’s none too impressed with the Corps of Engineers, Sterbcow seems to reserve the most ire for the Road Home program, which he calls “atrocious” and “an embarrassment” due to its general mismanagement that has left so many people still waiting on their rebuilding money. He’s also dubious about what’s going to happen with all the homes from people who took the buyout option. “The city can’t even fix a pothole. What are they going to do with all the Road Home houses they now have on their books?” he asks.

In the recovery process, however, he recognizes that New Orleans is following an established pattern. Here, as in other cities that have suffered from natural disasters, many of the poor and elderly have moved out while younger people have moved in. The average income has gone up. And full recovery takes time. “Like it or not, we need patience. Other cities took 15 years to recover. Now, we’re just entering year three,” he says.