Ready for a Close-Up 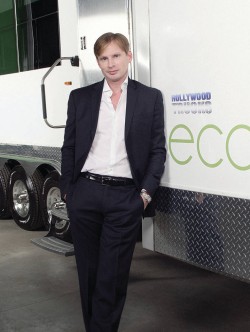 Living in the midst of New Orleans’ booming film business, locals going about their days frequently happen across on-location shoots and all of their crew members, actors, equipment and vehicles. More often than not, those vehicles are emblazoned with the logo of Hollywood Trucks: by far the largest vehicle rental company for Louisiana’s film industry. The company claims to have served 98 percent of films and TV series recently filmed in the state.

Andre Champagne, CEO of Hollywood Trucks, oversees a fleet of some 400 vans, camera trucks, semitrailers and more. With architects and interior designers, he has developed a unique line of trailers for wardrobe, makeup and talent use, called Ecoluxe. These trailers use eco-friendly fuels, solar power, and thermal technologies, as well as recycled materials. Most of them still require some additional electric power — but Champagne’s newest accomplishment is an Ecoluxe trailer for talent that is 100 percent off the grid.

“It’s the most advanced trailer of its kind in the world,” he explains. “It doesn’t burn any fossil fuels. There are no loud generators. I’m still amazed at how quiet it is and how cold the air conditioning can get.”

The vehicle is also rather spacious and luxurious, which is necessary, considering that it’s geared to A-listers. The unit has two minimalist, bright white rooms to relax in, a mini-kitchen and a bathroom, and it’s equipped with Wi-Fi, 3-D flat-screen TVs, iMacs, and plenty more gadgetry. The first star to use it was Brad Pitt, when he was in town for May’s Make It Right gala.

“Hollywood stars are environmentally conscious, and the film industry is, too,” Champagne says. “It’s where things are going. The more you can do in this area, the more viable your business becomes. Our greatest focus now is to make enough trailers to meet demand.”

At the same time, Hollywood Trucks is also focusing on expanding out of Louisiana. It has struck a deal to provide vehicles to Pinewood Studios, a storied film production company founded near London in the 1930s. Champagne will be working closely with Pinewood’s Atlanta studio, but his company will also provide vehicles to the flagship studio in the United Kingdom. “We’ll have to put the steering wheels on the right side,” he says.

Champagne’s company took just seven years to move from inception to an international presence. However, he didn’t set out with the business idea of vehicle-leasing in mind. He knew he wanted to be involved in film, and saw this opportunity along the way.
At first, actually, Champagne’s plan was to become a doctor. The Louisiana native graduated from LSU in 2002 with a science degree, but instead of enrolling in medical school right away, he set out for the West Coast.

“Growing up, I read a lot of books, and when I realized that books were often the basis of movies, I was sort of fascinated by that,” he says. “I knew story arcs and story structure, but not how everything was put together in a film. I thought I’d take a risk and pursue a dream. If it didn’t work, I still had a backup plan.”

Some people set out for Hollywood with the goal of becoming an actor or writing screenplays, but Champagne didn’t feel he knew enough about filmmaking to decide what exactly to pursue. He decided that he wanted to learn about everything. He found unpaid intern positions in different departments on many films, and eventually became an executive assistant to a well-known producer.
In 2007, a change to Louisiana’s tax-credit laws led to an influx of in-state productions. Champagne returned to his home state to work as a consulting producer on a film. One problem, however, was that the state lacked the infrastructure to support filming. For example: There weren’t enough trucks. So Champagne and a partner bought five vans and two stake-bed trucks and leased them to the production. Other productions needed them as well, so the partners bought more. By the end of Hollywood Trucks’ first year, its fleet had grown from seven to 70 vehicles, and it kept growing.

Louisiana’s film infrastructure was weak in other ways. For example, it didn’t have many industry publications. So Champagne started Scene magazine, which publishes everything from features on actors, to industry insights from lawyers, to job resources.
“It began as a way to advertise my own company,” he says. “I wanted a way to reach decision-makers. But it’s grown so much. We have a circulation of 25,000, and I have a backlog of content to publish.”

In addition to everything else he does, Champagne hasn’t given up on producing movies. He’s never lost his love for stories. “I’m always reading scripts,” he says. “That’s the hardest part: Finding the perfect script.”