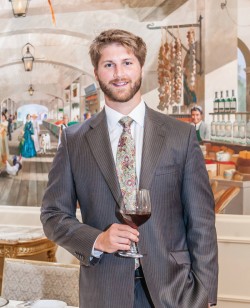 Sommelier John Mitchell’s love of wine has taken him to Africa, Australia and across Europe. First, though, it gave him an in-depth tour of South Carolina.

Mitchell’s first restaurant job was waiting tables at a pizza shop in his native Greenville. “I really loved the personal interaction,” he says. From there, he moved across the state to Clemson, and eventually ventured to Charleston, where he began working at McCrady’s Restaurant. “That’s really where everything took off for me,” he remembers. “I was exposed to a ton of wine.”

As he started to learn more about wine, Mitchell realized that this new interest would become more than just a job. “Having not traveled at that point, it was a way for me to travel vicariously through the bottle,” he says. He began studying history, culture and language, and learning the correct pronunciations of bottle names and how wines were made. “There’s so much to know and always so much to learn,” he says.

He continued to move around, doing stints as assistant sommelier at restaurants in Atlanta before returning to Greenville, and then going back to Charleston. “I lived in a lot of places in a very small amount of time,” he says. “It was like a big, long apprenticeship. It really broadens your horizons — you learn from not only a bounty of chefs, but a bounty of server talents and sommeliers.”

Eventually, Mitchell came to New Orleans, becoming assistant sommelier at Windsor Court Hotel. With plans to move to San Francisco after two years, he didn’t see himself staying in New Orleans — until a friend suggested that he check out Stella!

Restaurant in the French Quarter. “Like everything in life, luck had a big hand in all the moving and shaking I was doing,” Mitchell says. He found exactly what he was looking for in Stella! chef/owner Scott Boswell’s “obsessive” approach to fine dining, and he spent more than four years shaping the restaurant’s award-winning wine program. “New Orleans is a really great food and wine city,” he says. “There’s no wine that we can’t obtain here.”

Through his travels to France, Italy and Greece, Mitchell not only got to taste wines from around the world — he got a taste of what it was like to make them. “Doing pump-overs and punch-downs, all the laborious and little things, helps you realize how much of a pain it is to produce this wine,” he says. “You know how much work and love and passion goes into what [wine producers] are doing. To tell their story is definitely the most important thing, and one of the things we feel most passionately about.”

In February 2014, Mitchell was looking for another change: “Something bigger, more sedentary,” he says. He returned to Windsor Court, this time as sommelier and director of outlets at The Grill Room. Now, he feels he’s found a long-term home. “This is the see-all, be-all, as far as I’m concerned,” he says. “The Grill Room is amazing … it’s like walking in and opening up a new restaurant each time.”

When he’s not serving wine, drinking wine or reading about wine, Mitchell lays low. “It’s crazy to think, but there’s not a lot of time for anything else,” he says. “While wine and food and beverage is my job … it’s my passion. That’s when I get to sit down in a stress-free environment, and taste and analyze more; to enjoy it as libation.”

828
previous Ready for a Close-Up
next Mixing It Up