One of New Orleans’ favorite bartenders is making moves — and delicious drinks. 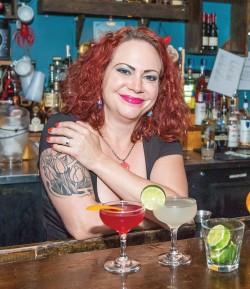 Though the start of Kimberly Patton-Bragg’s career behind the bar wasn’t glorious, it helped pave the way for her career as one of New Orleans’ top mixologists. “Technically, my first job was being a bartender,” says Patton-Bragg, who hails from Jacksonville, Fla. “That was mixing grapefruit juice and prune juice for old men at the golf club.”

Later, Patton-Bragg moved to New York City to pursue an acting career. She began tending bar to make ends meet, and she found herself giving a lengthy answer to the question of what she did for work — trying to explain that while, yes, she was bartending, she was actually not a bartender.

Finally, she realized that she genuinely loved being behind the bar … and it didn’t hurt that the job afforded some financial stability. “It started sinking in for me when I worked at Blue Smoke in New York,” she says. “I was an actor then, and bartending pays a hell of a lot better than Shakespeare.”

Six years ago, Patton-Bragg and her husband moved to New Orleans; since then, she’s helped build the cocktail programs of some of the city’s most-vaunted destinations, including the Swizzle Stick Bar, Dominique’s on Magazine and Domenica. She recently left Tivoli & Lee, where she created the restaurant’s whiskey-based cocktail list, to become the front-of-house and bar manager at Three Muses on Frenchmen Street.

“Initially, I was hired to consult on Three Muses’ cocktail list,” Patton-Bragg says. The tiny club wanted her to stay, and Patton-Bragg liked the idea of being so close to her home near Frenchmen. “I got an offer I couldn’t refuse,” she says. “I have a three-minute walking commute … but I’m going to miss my Tivoli & Lee family.”

Patton-Bragg is known for her creative liquor infusions, which change according to her whimsy and what’s in season — think hibiscus-and-jalapeno-infused tequila, or a refreshing, summery gin flavored with blueberries and cucumbers. In the future, she hopes to open her own restaurant to end what she sees as New Orleans’ “drought” of authentic Mexican street food.

Though you might imagine Patton-Bragg spending her free time making fabulous cocktails just for herself, she claims that’s not the case. When off the clock, the bartender becomes “just very boring and domestic,” cooking and spending time with her husband — though most would argue that her interest in fencing is anything but boring. “I do fencing on Tuesday nights,” she says. “I’ve been fencing for a couple years, and I love it.”

In recent years, the profession of bartending has gained respect, and the terms used to describe bartenders have gotten fancier. Patton-Bragg usually goes by “bartender,” and has no problem being called a “mixologist,” but there’s one moniker she truly dislikes. “Don’t ever call me a ‘bar chef,’” she says. “That’s the term that drives me crazy. Chefs earned their title. They’re chefs. That’s something that should be respected — and so should being a bartender.”

Because the scope of spirits and ingredients available to bartenders is always expanding, Patton-Bragg is continuously learning. “I’m constantly reading up on things; I’m always experimenting,” she says. “It’s really like being a pharmacist.” She also works with Glazer’s, a local liquor and beverage distribution company, offering spirits education and bartending at events.

Though she loves creating new drinks, Patton-Bragg says that the best part of her work is interacting with her customers. “We’re bartenders, not drink-makers,” she says. “We’re tending to the bar, making sure it’s a safe space and that everyone is enjoying themselves.”