This artist’s business is melting down. 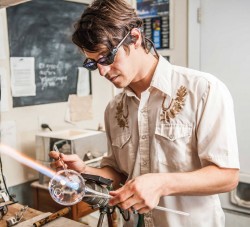 “I’ve always been a student — even now,” says Andrew Jackson Pollack. Born in Atlanta, the glass artist began making art at an early age — influenced by his mother, an art teacher and professional ceramicist. “She made glass beads and whatnot,” he remembers. “I was fascinated by it.”

While studying at Loyola University New Orleans, Pollack enrolled in glassblowing classes at New Orleans GlassWorks and Printmaking Studio. He quickly began exploring classes at other studios, including the Penland School of Crafts in North Carolina, and he focused on large-furnace glassblowing — until a scheduling mix-up changed his path.

“I had gone to one of these schools, and they had overbooked the class that I was in,” Pollack says. He ended up taking a class on lampworking, also known as torchworking or flameworking. “They told me I was going to be in a lampworking class, and I thought we would be making lamps,” he laughs. “That was my first introduction to being able to sculpt and blow glass on a torch.”

Pollack quickly became agreeable to working with the torch — in part, because this method was more financially accessible than renting studio time for large-furnace work. “It was really attractive to me,” he says. “I thought, ‘I can afford to get some equipment, and practice and learn how to do this.’” A year later, he was creating pieces in his own home studio. “It was more of a hobby, although I was teaching at [GlassWorks],” he says.

Pollack worked at GlassWorks for 12 years, including teaching at the studio’s summer camp for kids). “There aren’t many fine-art glass galleries in New Orleans,” he says, explaining that the city actually has a long history of glassblowing. “I thought about opening my own studio and gallery, and all of that, and it may be a long-term plan, but, for now, I enjoy just holing up in my studio.”

He also teaches classes at YAYA Creative Glass, a studio and gallery in Mid-City, and he exhibits his work at Rhino Contemporary Crafts Company at the Shops at Canal Place.

Right now, many of Pollack’s pieces involve birds and branches, the latter of which he usually crafts with plain, clear or frosted glass. “I use color — I love color — but I have a limited palette that I like to use,” he says. He often renders his birds in rich hues, like ruby-red and cobalt; paired with the clear-glass branches, the colorful birds become cardinals and blue jays, peeking out from tree branches.

“People are really enjoying my birds, and I’m really enjoying making them,” Pollack says. “Ideally, I’ll change my theme — and my focus and what I’m interested in exploring — often. I always have to balance making what I want to make with what my customers and collectors want to see.”

Because he often works from his home studio, Pollack times the creation of his pieces carefully, creating small pieces of a work in preparation for using a bigger facility once the weather cools. “A lot of the studios shut down in summer,” he says. “I’ll make a lot of the smaller parts and components, and do a lot of the cold-working over the summer. In the end, it’s kind of like putting together a kit. You have to make all of your components ahead of time.”

Pollack’s pieces aren’t the only part of his work that will fire up this fall. His schedule will heat up, too, as he travels around the South to show and sell his work. “I probably do 20-plus shows a year: art markets, festivals, big shows,” he says.

This year marked the artist’s fifth year manning his own booth at the New Orleans Jazz & Heritage Festival. Look for him — and his three-year-old, aspiring glass artist daughter — there again next year, amid twisting glass branches and piles of bubble wrap. andrewjacksonpollack.com