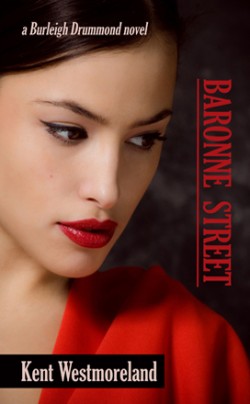 Detective novels, like those by Raymond Chandler and Dashiell Hammett, often feature a bitter, middle-aged, financially unsuccessful protagonist. Kent Westmoreland, author of mystery-thriller Baronne Street, wanted a different type of detective to star in his work.

“I re-envisioned the detective for my series,” Westmoreland says of his main character, Burleigh Drummond. “[I wanted] someone who would be young and successful. He’s a ‘fixer’ for politicians and bluebloods. He gets called in to handle their problems … by negotiation, bribery, blackmail — whatever it takes.”

Westmoreland, who felt out-of-place growing up on his family’s farm in North Carolina and left “as quickly as possible,” originally planned to set his series of mystery novels in Palm Beach, Fla. But after moving to New Orleans to become a programmer for Entergy, he realized the city was a perfect fit for Drummond’s character.

The author cites Chandler, Hammett and Robert B. Parker as three of his main influences. “The thing I like to really focus on while I’m writing is that the characters all have to be very clever and witty in their speech,” he says. “My writing always speaks with authority and authenticity.”

While writing Baronne Street, Westmoreland worked as a project manager for Capital One, dedicating his nights and weekends to writing. His novel was published in 2010. “I think the people who most enjoy my books are people who like really sharp, concise writing,” he says. “People who like believable stuff.”

Shortly after his book came out, Westmoreland went into “quasi-retirement,” becoming a professional bartender. He eventually joined the crew at Cocktail Bar at Windsor Court Hotel, where he now runs the bar program — and he’s currently hard at work on a sequel. kentwestmoreland.com
Places, Everyone!: Participation in this theater program grows kids’ confidence — and then some.

Last year, the Crescent City Lights Youth Theater celebrated its 20th anniversary. The theater program serves children from all over the New Orleans area, offering them a chance to participate in full-scale musical productions.

After Hurricane Katrina, Crescent City Lights partnered with the New Orleans Recreation Department. Now, the company rehearses and performs in the NORD Ty Tracy Theatre on the first floor of historic Gallier Hall.

Crescent City Lights stages two productions each summer, casting kids from 7 to 8 years old up to 17 years old. “We keep our casts small,” Condy says. “We don’t take more than 30 children.” Any child can audition for Crescent City Lights — no previous experience is required. “We work as an ensemble, so all of the kids are involved in the entire show,” says Condy, who is also the program’s musical director and one of its producers.

Once the ensemble has been cast, Condy and her team work with the children for a few days, and then they cast solo roles. Rehearsal periods span five to eight weeks and culminate in public performances. “Our shows are musicals by young people, for everyone,” Condy says. “They’re really well-produced.” And a live band provides all accompanying music.

Participation can have a hugely positive effect on kids, helping them develop skills and self-confidence. “Most important for us is that we’re teaching them the job skills they need to get ahead,” Condy says. “We’re finding now that [job skills are] even more important than the arts training.” Along with taking lessons in singing, acting and dancing, kids learn how to budget time for solo practice and rehearsals.

“You’re teaching these kids at a young age that they have to depend on themselves,” she explains.
Condy can tell “so many stories” of Crescent City Lights alumni who found their voices and personalities through participation in the program. “An overall finding is that the children become comfortable in their own skin, because they know what they like — and that is so important for a child,” she says. “The confidence they gain through our program just feeds the rest of their life.”

Artist Ursa Eyer recalls that her first artwork caused her mother some distress. “My mother dragged me to a car repair shop, where out of deep and unrelenting boredom — the kind that can only come from a child forced to hang out at a mechanic shop — I began to run around in circles, collecting all the pieces of discarded, rusty metal and bolts I could find,” Eyer says.

She fashioned the scraps into a kinetic sculpture and brought it to school to share with her art teacher — who showed Eyer a book of artists doing “similar” work. “I suddenly felt this connection I never had before,” Eyer remembers. “Not just with those artists, but with all of the people who appreciated my work. It was like a whole new form of communication, and I knew, without a doubt, what I wanted out of life.”

Eyer, who grew up in Gentilly, currently focuses on illustration — but she doesn’t allow that designation to pin her down. “Ink, watercolor, digital and acrylic are my current favorite media, but I’ve never been able to limit myself to one medium, as my tastes and inspirations are constantly evolving,” she explains. “All aesthetic and compositional choices are largely attributed to my time studying in Japan.”

Listening to one song over and over on repeat is a primary source of Eyer’s inspiration. “It’s admittedly a kind of obsessive ritual that often shows up in the details of the work,” she says. “My work serves as a collage of influential parts of my experiences. The illustrated books of my childhood are mixed with the bittersweet imagery connected to growing up in New Orleans.” Flood and water imagery, and the concept of “home,” appear regularly in Eyer’s work; the artist says this was a direct result of Hurricane Katrina.

“I see my work as an emotional narrative: detail-driven and simple, quiet and loud,” she says. “In the immediate future, I want to continue making art and occasionally go on tour. My ultimate dream is to start a self-sustaining artist’s community in the New Orleans area — a space that provides resources for artists and musicians as well as sustainable living.” ursaeyer.com