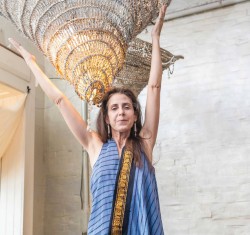 Sometimes, art is born of necessity. That was the case for artist and yoga teacher Elizabeth Eckman; while building out a blighted property on Oretha Castle Haley Boulevard a few years ago, she and her husband Gary found themselves searching for affordable yet creative lighting solutions.

As a ceramic artist and classically trained painter, Eckman was creating large, openwork clay pieces at the time — but they were often fragile, even when carefully assembled piece by piece. “There are limits to how big ceramic sculpture gets,” she says.

Heavy, breakable ceramic clearly wasn’t the answer for something that needed to hang overhead — so Eckman came up with something else. “I had this bizarre idea: I could crochet light fixtures,” she says.

She began experimenting with sisal, a stiff fiber derived from the agave plant, which lent itself to creating fast and sturdy textile sculptures. “Because the sisal is so stiff, it happens pretty quickly,” she says of each piece’s completion. The sculptures are studded with bits of cast-off crystal, and draped with Mardi Gras beads and glass punch cups: two elements Eckman “adores.”

Eckman says her working process feels a lot like meditation. “I have an idea, and then it’s kind of algorithmic — there’s a lot of geometry to it,” she says. She based her first textile sculptures on armatures of driftwood and steel wire, and she has continued using wire to steady the shapes of her creations. “It’s not just about the object,” she explains. “It’s about the light and shadows that project beyond it.”

When the couple bought their Oretha Castle Haley building in 2007, the structure was in near-total disrepair. Its floors were rotted out, and its roof had burned off. Having closed on their own living space in New Orleans just two days before Hurricane Katrina, the Eckmans were no strangers to renovation and repair. But the universe had more in store for them than just the exhausting challenge of rebuilding their new property.

“Right about the time we started [working on] this building, I got cancer and almost died,” Eckman says. The artist believes that crocheting her sculptures helped her recover. “The wrists are a reflex point for the heart,” she says, moving her wrists in a repetitive motion.

After a long, laborious build out, during which Eckman regularly commuted to Mexico for chemotherapy, the couple finished restoring the building. The gorgeously appointed space, painted in soothing lavender, gold, gray and silver, showcases Eckman’s sculptures and her husband’s colorful glass mosaic work.

They rented the space to a coffee pop-up called Church Alley Café; when the pop-up’s proprietor decided to move just down the street this February, giving no notice, the Eckmans opened their own café in the space.

The café’s new name is Tasseology. “It means ‘cup science’ — divination through tea and coffee,” Eckman says. Along with pursuing their growing interest in sustainable coffee and tea, she and Gary cook and bake all of the café’s snacks and pastries.

A few customers, stopping by in search of Church Alley, have been confused to find Tasseology. The former café had become known for its distinctive aesthetic: a situation that Eckman sees as proof of the impact of visual art. “This is a huge lesson in the power of art to brand a business,” she says. “Local businesses should reach out to local artists to brand their businesses. This says something powerful about what art can do in the world.”

In the same vein, Eckman believes that ownership of original art should be available to everyone. She recently became a member of Where Y’Art, a local art marketplace and community that shares the same mission. “If someone wants my art, they need to talk to me,” she says. “The happiest homes, for me, are those where the art went for free to friends.”

566
previous Man on Fire
next Performance, Participation and Preservation