Enlist in a high-octane exercise experience. 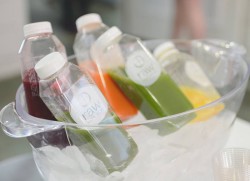 There are a lot of boot-camp fitness programs in New Orleans, says Nolan Ferraro, owner of Salire Fitness — but few date back as far as his. “As it was starting to trend and become a catchphrase for outdoor fitness experiences, we were one of the early adopters,” he remembers.

A licensed wellness coach, Pilates instructor and personal trainer, Ferraro opened Salire in 2005, shortly before Hurricane Katrina. Its Mid-City location flooded badly, and it took about one year for Ferraro to re-open the studio.

In 2009, Salire launched its first boot-camp program. “It was an opportunity to do outdoor group fitness and give clients an opportunity to work out at a different price point,” Ferraro says. Now, through its Power in the Park cross-training boot camp, Salire provides daily workouts for men and women who enjoy group motivation and high-energy movement.

The format includes 30 minutes of military-style boot-camp exercises and 30 minutes of a specifically focused class (like Ab Attack or Pilates in the Park). Clients can try their first class for free, with classes offered five days per week. One month of unlimited classes is currently $99.

“In general, we try to help our clients form a sense of community, connectedness and camaraderie,” Ferraro says. “They feel comfortable about the fact that they have options.” Workouts can be modified to be more or less vigorous, depending on your fitness level.

In 2010, Salire moved to Magazine Street to expand its space and services — and this month, the business will begin offering a new group class called Body Blitz. With eight participants switching between eight-minute sessions of cardio and floor training, the class is basically a “small version of boot camp indoors,” Ferraro says.

The top two questions people have about boot camp are, “‘Am I fit enough to do this?’ and ‘Will it help with my overall goal of weight loss?’” Ferraro says. “I say yes to both. First, you are fit enough to do it because you can modify the exercises. And second, although nutrition is 85 percent [of weight loss], anytime you burn calories and move more, you’re going to improve your weight-loss potential.” salirefitness.com; bootcampneworleans.com

Drink to your health!
A green-juice craze has been sweeping the nation for quite some time — but, as usual, New Orleans didn’t immediately jump on the healthy bandwagon. “Locals are like, ‘What is this green juice?’” says Sheena Mannina, co-owner of Raw Republic, a Magazine Street mecca for juice and raw-foods.

And, of course, there’s the juice. “We specialize in being a cold-press juice bar, which is a more labor-intensive, meticulous juicing process that results in a product that has 30 percent more nutrients than centrifugally juiced products,” Mannina explains.

The store sources all of its produce from 100-percent organic farms. “If you’re drinking a juice that is not organic, your body has to do double the work just to absorb the nutrition,” Mannina says, citing pesticides as one reason for additional digestive processing.

Raw Republic offers one-, three- and five-day cleanses for those who would like to kick-start a juicing habit. Mannina says that often, a new customer will come in for a juice cleanse, and then stop by again … and again. “It becomes a lifestyle change,” she says. “The resulting energy — the change in your physical feeling — inspires you to change more and more.”

Don’t worry: Raw Republic isn’t trying to keep you away from the many bars and restaurants in its popular Uptown neighborhood. “It’s all about balance,” Mannina says. “I’ve been to Buddha Belly, and seen people mixing our juice with their cocktails!” She and other health coaches regularly conduct coaching sessions and raw-food cooking demonstrations at the store. rawrepublicjuice.com

Made With Love
Try vegetarian fare cooked with care.
You are what you eat — and Sughosh Berg, founder of the soon-to-open Good Karma Prasad Café at Swan River Yoga in Mid-City, says that this adage applies right down to the attitude and energy of the cook preparing your food. The 100-percent vegetarian restaurant will imbue its affordable dishes with positive energy.

“‘Prasad just means ‘blessed food’ (or food that is made with good intentions, or by people who have good intentions or clear minds),” Berg explains. “We really try to promote being healthy, being happy, being positive and creating food in that way — and serving it to people in that way, so they can have a full experience and nourish their body and mind.”

Berg, who grew up on a Hare Krishna farm in Mississippi, learned to cook from his Malaysian mother and others in his community. About two years ago, he connected with Swan River.

“It all started because I started doing kirtan music — which is kind of like a spiritual type of music from India — with Michelle Baker, who is the owner of Swan River,” Berg says. “From there, we started bringing food to our programs. So everyone would eat vegetarian meals, and we would play music, and sing and dance together afterward. We wanted to have a place where we could do that all the time.” Thus, Good Karma Prasad Café was born; Berg’s mother owns several Good Karma Cafés in Mississippi, so the name followed naturally.

The restaurant will offer dishes that range from traditional Indian, Thai and Malaysian fare to contemporary vegetarian options, like po-boys, salads and wraps. Berg will be the primary chef, along with his fiancée and future mother-in-law. Plates will be priced reasonably, in line with the café’s goal of providing food “as a blessing, or a service to the community,” Berg says.

One of Good Karma Prasad Café’s offerings will be an Endless Love bowl of rice and Indian lentil stew, or dal, with unlimited helpings for $5. Sounds pretty blissful to us! swanriveryoga.com/good-karma-prasad-cafe