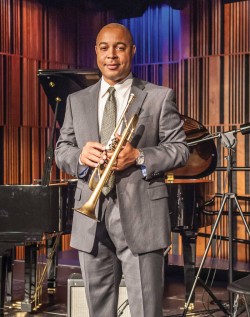 Historically, there’s been a rift between musicians’ talent and hard work, and the compensation and appreciation they’re afforded. Edward Anderson, a New Orleans-born trumpeter, composer and educator, aims to close that gap.

An alumnus of the University of New Orleans’ Jazz Studies program and the Manhattan School of Music, Anderson went on to earn his doctorate in composition at Louisiana State University. As a graduate student in New York City, he worked as an assistant to the Sony Records executive, Dr. George Butler, who discovered and signed New Orleans legends like Terence Blanchard, Wynton Marsalis and Branford Marsalis — and this was where the connection between art and business clicked for Anderson. “I had carte-blanche access to see firsthand the record industry at its highest level,” he says. “It was an experience that really opened my eyes to the business of music.”

In addition, the concerts are recorded and preserved on the organization’s website, and shared across partner websites to further the reach of New Orleans’ authentic sounds. This is part of Anderson’s push to use technology to NOLA Art House Music’s advantage. He notes that in the age of digital recording and marketing, artists have greater control over the distribution of their music; on the flip side, it’s become harder to filter the truly great artists from the average or unimpressive. “By amassing a select group of artists with related origin, branding them with a strategic team, and creating a consistent and visible track record, we believe we can have greater success for the artist,” Anderson explains.

Strategy and infrastructure both play a large part in NOLA Art House Music’s goals. The nonprofit has created an educational program for the city’s young musicians, covering not only musical instruction, technology and production, but also personal finance and other real-world skills that musicians need to succeed.

“I have been very fortunate to have the opportunity to view the world of music from many vantage points: as a budding music student, professional musician, educator and entrepreneur,” Anderson says. This bird’s-eye view has helped him craft a comprehensive program to nurture New Orleans’ musical talent — and he has big plans for launching the next generation of local musical leaders.

“I have always seen greater potential for New Orleans music,” he says. “When an artist has a team of highly invested, skilled, connected professionals, and a funded organization to pay people to focus on building an artist’s brand and market value, it is a totally different existence than an artist doing everything — including negotiations — for his or herself. That was my inspiration for NOLA Art House Music.”

Anderson expresses his ultimate goal simply and elegantly. “When people think of New Orleans or travel here, the first things on their minds are food and music,” he says. “NOLA Art House Music wants to make sure that our great legacy of jazz continues — not limited by a predetermined image, but as fresh and relevant to the 21st century as Louis Armstrong and Jelly Roll Morton were to the early 20th century. We want to help redefine jazz as cool and fresh again.” nola-ahm.com