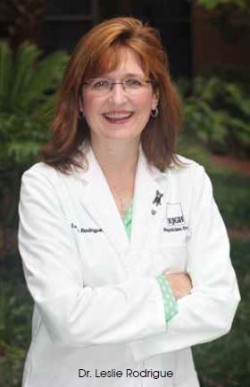 “Growing up, I was into science,” says Dr. Leslie Rodrigue, who was born and raised in New Orleans. She planned to focus her studies on either geology or astronomy, and she considered becoming a science teacher. But as she fulfilled her high school community-service requirement as a “candy striper” at Lakeside Hospital, her goals changed. “It made me want to be a nurse,” she remembers. “I wanted to work in neonatal intensive care.”

After earning stellar grades during her first semester of college, Dr. Rodrigue switched her major to pre-med and never looked back. Her biggest goal in residency was to do outpatient internal medicine; it was a specialty she liked for its variety of conditions and challenges. “With internal medicine, I could do everything,” she says. “I could specialize in the whole patient.”

As the first physician in her family, Dr. Rodrigue practiced internal medicine at Ochsner for more than a decade, leaving the hospital clinic environment in 2006 to enter private practice.

In 2009, she became a hospitalist at East Jefferson General Hospital with a focus on providing general care to critically ill patients. “My group admits for several primary-care doctors,” she explains. “This is what we specialize in. We’re around all the time and can take care of the critical things that happen.”

Two years after becoming a hospitalist, Dr. Rodrigue expanded her focus to include palliative care. She became board-certified in Hospice and Palliative Medicine in 2012, helping to bring comfort to hospice patients and their families as the medical director of Hospice Associates of New Orleans.

Though she no longer works in hospice care, Dr. Rodrigue says the experience impacted the way she interacts with patients. “Doing [hospice care], I felt like I could give something to people who were struggling and dealing with end-of-life issues,” she says. “Even dealing with my regular patients, it really helps me to understand and explain things.”

As a hospitalist, Dr. Rodrigue still works with a variety of medical conditions. However, the structure of her practice has changed. “The difference is that [hospitalists] collaborate with a lot of subspecialists,” she says. “We also deal with a lot of patients who are in intensive care.”

The doctor’s schedule is also different these days. As a hospitalist, she works seven days on and seven days off. This flexibility allows her to spend more time with her young son — taking him to school or camp in the mornings, and tucking him into bed at night.

One of the things Dr. Rodrigue loved most about working as a clinician was the amount of patient interaction that her practice offered. “You would form bonds with whole families,” she says. “You would see them through different points in their lives … and that is a big part that I miss.”

She brings the same patient-centered approach to her work as a hospitalist, helping patients understand their next steps, and offering understandable overviews of treatment plans and prognoses. “We’re really responsible for trying to coordinate and direct the care — looking ahead, [deciding] when patients will be appropriate to discharge and where they’ll go,” she explains. “We take the whole, big picture and assimilate that to coordinate and make the best recommendations … in addition to medical care. That’s what I like.”

More than anything, Dr. Rodrigue aims to treat her patients as if they are her own family members. “It’s a scary time when they come see me,” she says. “I think that because I don’t have a set schedule … I can spend as much time as I need.”

983
previous Helping Hands
next One Body, One Mind: A new wellness center brings it all together.