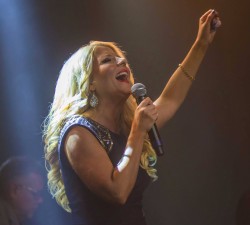 Anyone who called New Orleans or the Gulf Coast home during the bitter end of August 2005 will forever remember their personal story culled from the dark days when Hurricane Katrina bombarded their lives and left them with some form of indelible mark. Rebecca Powers, a native New Orleanian residing in Gulfport, Miss., lived to tell one of the more harrowing tales. Her mind-boggling experience has been preserved in a poignant ballad titled “Washed Away,” written by Powers and musician David Grey, owner and founder of CAT 5 Records (cat5records.com).

“Basically, I watched my whole life flash in front of my eyes and saw my home get washed away during Katrina,” says Powers, who was raised in the Bucktown area of Metairie (she was living in Gulfport, anchoring the 6pm and 10pm newscasts for WLOX TV 13 at that time). “During Katrina, everyone was on call. So I was at the station all day Saturday and Sunday, and, because I had an expensive IVF procedure the previous week, I went home Sunday night so my husband Ben could administer an intramuscular shot to me.” After packing and attempting to leave their house (located one block off the beach) around 5am, a large pine tree fell across the entrance to their cul-de-sac neighborhood — trapping the Powers at home.

“At first it was still relatively calm, and we started seeing the water soaking through the carpet, and, when I looked out the window, the water was rising, and it looked like a fish bowl,” Powers says. “I laughed and said I wanted a new carpet anyway. I was so naïve, but, to us journalists, it’s like you’re looking at everything in a box every day when you report the news and you can become jaded.”

The seriousness of the situation hit Powers when a jet ski crashed through her breakfast-area bay window. “At that point, we were breached. We went up to the second-story loft and watched all of our DVDs floating in the water downstairs.” By this point, it was 8am on Monday, Aug. 29, 2005 — and the weather conditions got worse; the Powers saw sunlight creeping through gaps where the roof met the walls of their wooden home as the water steadily rose.

“It was so surreal; I laid down on the bed upstairs with my cat Lola and my dog Casey, and my entire body was drenched in a cold sweat,” says Powers, who waited for the ceiling to collapse. “I kept telling Ben, ‘I’m sorry, I love you,’ because I felt like it was my fault that he was going to die (because he didn’t leave because of me). But he kept saying, ‘Get up right now; let’s go; don’t give up on me.’” A fortuitous and strange-on-any-other-day opportunity arose — in the form of a detached hot tub encased in foam insulation that was bobbing in the water — just about four feet down from their bedroom window. Ben, a retired soccer player, hatched an escape plan.

“Ben threw Lola and Casey in the hot tub, and I jumped in and grabbed Casey around the neck — and I was screaming for Lola, but I never could find her, and I assumed Ben was right behind me,” Powers says. “When we jumped, the house separated … and Ben didn’t tell me until the next morning that he had slipped under the house, and got tangled up in the azalea bushes and managed to pull himself up. The fact that he’s athletic probably helped save both of our lives.”

The Powers rode out the torrential storm under a neighbor’s carport atop a car for hours, dodging flying debris until around 6pm when they were rescued from their small neighborhood of 19 houses. Later, a neighbor’s girlfriend was found dead under a mattress just 10 yards away from the carport where the Powers had sought shelter. Seventeen days later, with Lola still missing, Powers discovered that finally — after five years of trying to get pregnant — the IVF had worked, but, sadly, she had suffered a miscarriage, leaving her as shattered as the pile of rubble she once called home.

Like others whose lives were rattled by Katrina, Powers moved forward. She covered myriad stories on the storm’s aftermath and the recovery of South Mississippi on WLOX. She got back to playing music with her band, the Myles Sharp Band. Powers’ beloved Lola was found with just a scratch on her nose, and, on Sept. 18, 2007, the Powers welcomed daughter Mary. And for the fifth anniversary of Katrina, the Weather Channel chronicled Power’s amazing survival story (this was at a time that she was pregnant with her son Max, born on March 6, 2010). “It was eerie watching what had happened to us on the Weather Channel,” Powers says. “They did an excellent job re-enacting everything!”

Earlier this year, Powers was reunited with Grey (who was working in Nashville and visiting WLOX before Katrina). Grey had moved back home to the Gulf Coast soon after the storm (after living in Nashville for 25 years in order to help his family recover). “David is a great songwriter,” Powers says. “We had lost touch because of the storm, and, after I told him my story, he immediately started writing a song that pretty much word for word describes what I told him happened during Katrina — the wind and waves were crashing, we said our last goodbyes, all of it. My dad died in 2000, and, when I was freaking out under the carport and couldn’t even hear Ben screaming right in front of my face, I honestly heard my Dad’s voice in my ear. He said, ‘Calm down, you’re going to be fine.’ It was clear as a bell. It was peaceful, and it was nice, but it is heavy — and David did a great job with the song.”

Powers and Grey went to Nashville in May and recorded “Washed Away” for Grey’s label, CAT 5 Records, at County Q Productions. They debuted the heartfelt tune at the K99 Homegrown Concert at the Hard Rock Casino in Biloxi on June 26, which also featured Grey and CAT 5 recording artist Lisa Albritton (performing “We’re Out of Here,” currently playing on country charts in the U.S., U.K. and Japan). “Washed Away” was recorded live and featured a choir composed of students from the WINGS program at Lynn Meadows Discovery Center (lmdc.org) in Gulfport. “Lynn Meadows was a good friend of David’s before she died, and the Lynn Meadows Discovery Center is doing wonderful things for children in the area,” Powers says. “A portion of the proceeds from the single will benefit the center.”

Powers, Grey and the Lynn Meadows choir also appeared in June on WWL-TV’s Eyewitness Morning News to perform “Washed Away.” “I miss New Orleans, and I love coming back home to New Orleans every chance I get to see my good friends and my family,” Powers says. “I loved growing up in New Orleans, and going to see live music with my best friend at Benny’s, and was really inspired to play music from hearing all the great musicians there.”

Last year, Powers left WLOX to spend more time with her children and has found time to pursue her passions as well, including playing music and advocating for children. She has also become the celebrity endorser for the Beau Rivage Resort & Casino in Biloxi, recording promotions, doing celebrity endorsements and focusing on the casino’s summer show — Saltoriya (beaurivage.com) — that runs until Aug. 17. It features comedy, music and a whole host of acrobatic daredevils performing gravity-defying feats. “Jaws are dropping at Saltoriya, and people are taking advantage of the great entertainment packages available now at the Beau,” Powers says. “It’s definitely worth the trip in from New Orleans.”