Home IN THIS ISSUE Quiet Storm on the Horizon
IN THIS ISSUE
SPORTS
July 31, 2014 Paul Wegmann 0

Quiet Storm on the Horizon

The return of Marques Colston is a boon for the Saints. 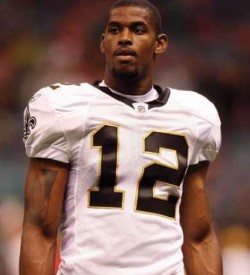 Every great army has its eternal soldier, and, in New Orleans, that is Marques Colston. When times seemed bleak in the 2013 season — during the playoffs in Seattle, for example — the Saints’ on-field general, Drew Brees, turned to his trustiest weapon, Colston. With the rain falling, and the Saints down 16-0, Brees connected with Colston on 11 out of 16 attempts (for 144 yards and a touchdown). Brees repeatedly hit Colston on crossing routes to grind the Saints back into contention, first at 16-8 and then finally at 23-15 — where they ultimately landed within the Seattle 40-yard line on a last-gasp, trick-play attempt from Colston himself. Coming against one of the best secondaries in league history, it was a stark reminder that the Saints’ career leader in receptions, total yards and touchdowns is still commanding respect and flashing elite ability whenever called upon.

Possibly due to persistent foot and knee ailments, Colston started slowly in 2013 — seeing just 31 targets in the first five weeks. Whether due to a shift in philosophy, sheer need or reinvigorated health, he returned to his usual excelling production, generating 48 receptions for 601 yards and four touchdowns in his last eight games. Over the course of a full season, that would translate to 100 catches and 1,200-yards — and that kind of per-game production puts him in the top echelon of NFL receivers.

In an offense in which Brees is known to spread the ball liberally to as many as 10 receivers of all stripes in a game, and where there is supposedly no first read, Colston is the same dependable warrior when called upon. And he is always there, having missed only two games in the last two years. On field, he provides the same outsized mismatch with reliable hands that he always has.

Colston has a fixed place in the Saints offense. Since the arrival of Sean Payton and Drew Brees, in every season in which Colston has been healthy, he has posted at least 70 catches for over 1,000 yards and at least seven touchdowns. The second half of 2013 fits right into the high end of that range. Among the pundits, coming into this season, there are again doubts about his health and the length of his career. Yet Colston has earned the name “Quiet Storm” for a reason.

Humble, rarely seeking public attention and committed to his craft, Colston has always shown up for work while actively seeking little recognition from the national press — even though only a handful of receivers in the NFL, if that, can boast a similar record. Since the Saints’ magical championship season in 2009, there has been a barely perceived transition in emphasis toward targeting the running backs in the passing game, and, last year, the wide receivers as a group had just over a third of all receptions, down from over half in 2009. The biggest change in that regard, as with all the receivers and running backs, is the departure of Darren Sproles — who attracted 71 receptions on 89 targets last year and had 19 red-zone touches (ranking him third on the team). In most likelihood, Colston, who had 16 red-zone touches, will be a major beneficiary of the redistribution of those targets and scoring chances.

Despite the ebbs in his early season, Colston was still the Saints’ second-most targeted receiver last year: pulling down 75 catches on 110 targets for a 67-percent catch rate, but, perhaps more remarkably, posting a drop rate of just 3.75 percent (one of the lowest in the league). That catch rate means nothing is going to change in Brees’ willingness to put his trust in Colston in times of need.

One of Colston’s biggest grabs of the year was a key six-yard reception on the last drive of the Philadelphia Eagles game — the only pass of that game’s winning possession. What has changed is the influx of new talent since Colston’s initial arrival in 2006, including Jimmy Graham in 2010, Kenny Stills in 2013 and Brandin Cooks in 2014. Graham has become the Saints’ leading receiver. However Cooks, and his scintillating ability to outrun almost any defender, may be a key factor in freeing up Colston to run more of those underneath and crossing routes that he displayed against the Seattle Seahawks.

Last year, the Saints were the first team in league history to field four players who caught 70 or more passes, thus the opportunities shall remain. But the addition of Cooks could reflect a dramatic departure from the philosophy of the last three seasons — as it indicates an expectation to throw the ball well past the line of scrimmage, as opposed to at or behind it, where much of the focus has been in the past, with the emphasis on receptions by the running backs now shifting back to the receivers. If that is the case, Marques Colston, the Quiet Storm, could be in for one of his biggest seasons as a New Orleans Saint in 2014.