Eight years in the making, a beautiful space is a testament to the partnership between owner and designer

The loft, tucked away on a tiny street in the American Sector, as parts of the CBD and Warehouse District are increasingly called, is as unexpected as the person who decorated it. Built in 1910, the Walle Building was converted into apartments and eventually condos by developer Sean Cummings, who had the taste and vision to leave the original paint, including pencil notations on the interior walls.

Purchased in 2000, owner Jim Lestelle thought the space structurally interesting and in need of little more than a couple coats of paint. The basics were in place: a sizeable living room with dark stained concrete floors; an open-air kitchen with state-of-the-art appliances; two large, modern bathrooms, one with a glass-and-brick-enclosed shower, the other with a terrazzo-lined bath; two brick-walled spaces for a bedroom, media center, or perhaps even a home office; a row of windows allowing light but privacy. But the space, with 12-foot ceilings and a living-dining area over 40 feet long, was more than the full-time communications professional had time to deal with. 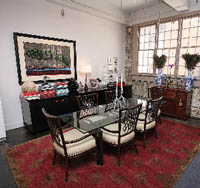 Enter John Stephens, a welder, originally from Quincy, Illinois, who had arrived New Orleans in 1999 to follow a dream of living in the Quarter. Using a boyhood hobby of coin collecting, he landed a job at James Cohen and Sons, a coin and antique weaponry dealer on Royal Street. Like a sponge absorbing the sights, sounds and sensibilities of the city—by way of its haunting museums, antique shops, art galleries—he became a collector of euphoria and an enthusiastic amateur decorator.

When Stephens met Lestelle, it was the beginning of a partnership resulting in a spectacular living space, some eight years in the making. It also led Stephens to a degree, acquired via night school and weekends at the only accredited interior design school in the city, Delgado Community College. “My background as a utility welder came in handy,” explains Stephens, who continues to work at Cohen and Sons. “I measure everything three times to make sure it works in proportion to a space.” And measure he did to accommodate an 11-foot-6-inch black-lacquer buffet found at Neophobia. It could not fit in the building’s elevator, so stairwells were measured to see it the piece could turn the corners. “It just made it,” says Stephens of the piece that dominates the dining area and serves as storage for books, Buddhas and lacquerware. To add a bit of the organic feel that may become Stephens’ signature, drawer pulls were replaced with twig-shaped ones painted deep red to resemble coral.

The color palette was inspired from the original interiors. A long wall of red faces a white wall in an entrance hall, the red reflection turning the white wall into a mauve hue. Other rooms are Chinese red, British racing-stripe green, taxi yellow, royal navy, soothing gray and as-near-to-Hermes-box orange as could be found from paint chips by Martin Senour, Martha Stewart and Ralph Lauren.

The first step in bisecting the 40-foot living room began with the purchase of a silk and wool carpet from Michaelian & Kohlberg. It was topped with leather sofas from Mitchell Gold and flanked by Lestelle’s great-grandfather’s Stickley rocking chair and another chair Stephens found in the Midwest. “I’m into natural forms, even if they’re Plexiglas,” explains the seemingly old-pro yet freshly minted decorator. “Antlers, whether hunting trophies or modern adaptations from Philippe Starck. I also believe that even collectors need editing. Jim is an art collector, so I focused on that. The desk backing a sofa is usable art titled “Halo,” found at the Ariodante Gallery on Julia Street. Columns topped with sculptures leading down another hall are the only pieces of art in that long space. A huge wire life-form that dominates another wall is from the Steve Martin Gallery. And the large dining table is from Le Corbusier, which was found at Ray Langley’s. In both bedrooms, the inspiration and much of the furniture is from Ralph Lauren, with works as diverse as prisoner’s art from the Jonathan Ferrara Gallery to prints of polo players.

Still there is an elegant, cohesive feeling and flow to the entire apartment. Nothing, not even the most massive of pieces, feels too heavy, no color shouts too boldly, and various collections, from inexpensive blue-and-white porcelain to priceless prints, are kept in check.

From a first major project to a budding career, John Stephens’ long, hard-earned ascent to membership into the ASID seems worth it with a stunning showcase such as this one.