The SoFAB Museum celebrates the food and drink of the South 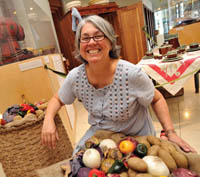 Before she opened the new Southern Food & Beverage Museum in June, Liz Williams had been an Army JAG officer and teacher of historic preservation law. Now she’s the director of a culinary museum (located in the Riverwalk) that’s the first of its scope in the South.

SoFAB was delayed a year or two by Hurricane Katrina, but since then, it’s taken on new importance as a facility where home cooks can research and attempt to replace their family recipes. “We really feel an obligation to help people who have lost their cookbooks,” Liz says. “We have about 4000 cookbooks now, and we probably average about 30 new books a day. People have been really generous.”

Are you a native, Liz?

I’m a native! I grew up in Lakeview and went to LSU for college and law school. Then my husband, Rick, and I joined the service, and I became a JAG officer. We lived in Stuttgart, Germany, and then we moved to Washington, D.C., for two years. What I didn’t like about Washington is that everybody’s from someplace else. We stayed there for about two years and then moved home to New Orleans. Now I live on Jackson Avenue in the Garden District.

How did a JAG officer come to open a food museum?

I used to work with the UNO Foundation; we opened the D-Day Museum [now the National World War II Museum] and did the planning for the Ogden Museum, which opened a couple of months after I left. But I’ve always been interested in the way food connects people, studying the food and the foodways, what people eat and why they eat it. Think about exploring the new world—they were looking for peppercorns and nutmeg and vanilla beans. Food is a big part of everyday life; it is life! So I thought: Let’s make a museum about food.

We formed the corporation in 2004 and had an exhibit in the Riverwalk in the summer of 2005. At the time, we had conversations with Mardi Gras World about setting up a permanent home there. But then came Hurricane Katrina, and everything changed.

What are you proudest of in the museum?

Our New Orleans and Louisiana exhibit is really wonderful. This is our permanent exhibit. Right now we’re proudest of our White House exhibit—we had the cooperation of the White House. Usually they’re all about the china, but we talk about the cooking at the White House, how what people do there affects the rest of the United States.

What separates Southern cooking from cooking in the rest of the nation?

Southern cooking is really layer upon layer of ethnic groups taking their own cooking techniques and melding them together with foodstuffs available locally. It’s the original fusion food—our cuisine has been influenced by all kinds of foods, not isolated. In the past, it’s been disdained because it [was considered] poor people’s food, but now eating locally is in vogue. Well, people have always done that here! How many people do we know that have a fig tree, a lemon tree, or a satsuma tree in their backyard? We grow mirlitons on our fences.

What do you and Rick like to cook at home? I grew up with a lot of Sicilian influence, so tomato sauce, artichokes, eggplant, often with pasta. I do gumbo, too, the whole canon of New Orleans food. Rick’s not a cook; if you ask him, he would say no, too!

What do you like to do when you’re not museum-ing?

We do a lot of traveling. Our son just returned from a Peace Corps trip to Africa, and we went to see him. We go to Tahiti, Europe, Mexico. I’m about to go to Paris to the Institut de Gout [Institute of Taste]; we want to bring a program that will teach children how to taste back to the United States.