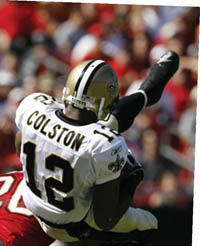 The New Orleans Saints, from a distance, are often frustrating, always triggering the eternal question of why they can’t win the Big One, always driving home questions of what is possible in the world of sports and what is not. The Boston Red Sox? Their fans waited 86 years between World Series wins. The Pittsburgh Steelers? They played 41 seasons before winning an NFL championship. Perspective is good for everyone and that takes distance. Overpropinquity is dangerous to one’s worldview. The mind needs vistas to see.

As they came tantalizingly close to the Super Bowl in 2006, the Saints could see the final cup of victory within reach. Their fans could see only that, too, not the flaws still left exposed in the team’s foundation: the defensive front four lacking a middle; the linebacking corps lacking a fear-striking captain; the unpredictable backup receiving corps consisting of every journeyman not named Marques Colston; and most important, the team’s own myopia toward its accomplishments. The coaching staff engaged in an elaborate ceremony, burying all accolades and preaching a new team liturgy based on the chorusing of the phrase “earn it.” But to what end? The team started 0-4, including both blowouts and achingly close finishes, then surged to 4-4, then 7-7, only to wilt after an exhausting uphill climb to a disappointing 7-9 finale. Maybe that descent has ultimately allowed the Saints to look back and see how far they’d climbed in 2006 and how much further they have to go this season.

The team enters 2008 with the bedrock of Drew Brees, and upon his arm the offense has thrived the past two years, ranking in the top five in yards and points while Brees has individually amassed over 8,800 yards passing and 54 touchdowns. Clearly everything is right at quarterback, but the Saints have also signed longtime stalwart play caller Mark Brunell, a 14-year vet who is a southpaw with past Pro Bowl accolades and more than 31,000 yards and 182 touchdowns on his résumé. The offensive line continues to look strong, with but one change: Center Jeff Faine is out, and last year’s signee Jonathan Goodwin is in. Given the kudos for Goodwin last year compared with Faine’s trouble pushing defensive tackles out of the way, most fans will consider this move an improvement. The rest of the offense poses questions. In 2007, Reggie Bush slumped and was injured, but in his extended stint filling in for Deuce McAllister as the number one halfback, he largely disappointed, reverting to the sidewinding style that often netted big yards east to west but not much moving north to south. All fans now wonder whether Reggie’s style will work in the NFL, whether he is truly dedicated to being a big-time producing running back and whether the Saints overreached by picking him with the second overall pick in 2006. It is difficult to imagine an offense better suited to his capabilities than what Sean Payton has built for him in New Orleans, so this may truly be Bush’s make-orbreak year. Meanwhile, Deuce McAllister will be seeking to overcome the odds of his second major knee injury, a feat rarely accomplished in a league in which tailbacks’ tenures are measured in terms far shorter than the sevenyear career Deuce has enjoyed to date. The team’s fallback option is looking very promising though, as Pierre Thomas burst out of Illinois as a free agent last year, beat out a college All-Star (Antonio Pittman) for a roster spot and then finished the season as the only Saints running back to ever amass 100 yards rushing and 100 yards receiving each in the same game.

Clearly, the Achilles heel of the Saints is still its defense. A veritable wave of offense rolling up yards and points has often succumbed in the past to a tsunami of yards and points in response from the other team, and in the end that is contradictory to the very concept of winning football. The coaching staff surely knows that something must be done on that front, as much as the fans have known it for the last two years. So what has been done since the Colts rolled up 41 points and tons of yards at will in Week One of the 2007 season? The Saints have added coveted collegian Sedrick Ellis at defensive tackle and heady middle linebacker Jonathan Vilma to shore up the soft middle, Bobby McCray on the end to add pressure to quarterbacks who last year seemed to have all day to throw, and drafted or signed corners Tracy Porter, Randall Gay, Aaron Glenn and Jerametrius Butler to chase down speedy deep threats who last year seemed to roam at will over the outstretched arms of Jason David and Fred Thomas. The usual dependable defensive links—Will Smith, Charles Grant, Scott Fujita, Scott Shanle, Mark Simoneau, Roman Harper, Josh Bullocks, Bryan Young and Hollis Thomas—remain and to that end the front office has again done a superior job of retaining key players.

And the front office itself will be under a microscope due to the veritable possible supernova effect of acquiring tight end Jeremy Shockey. Shockey could be the ultimate zerosum game, the positives of his incredible talents could be balanced by his egocentric personality and injury-prone track record. And in the midst of their team’s defensive miasma, Peyton and GM Mickey Loomis have invested their grandest off-season acquisition in yet another offensive weapon.

But in the end all these changes will have to be enough for only one thing that matters for any franchise that pretends to take itself seriously, to finally launch this team from the tier of American also-rans, the land of baseball’s lovable but ever-losing Cubs, football’s permanently mired Cardinals and basketball’s Clippers, where the horizon always looms ahead but can never be reached, into the echelon of champions, which is what its fans deserve. ?

93
previous Seek and Ye Shall Find
next Payton’s Prospects