The young president and co-founder of The Solomon Group, Gary Solomon, Jr., knows how to light up a room. 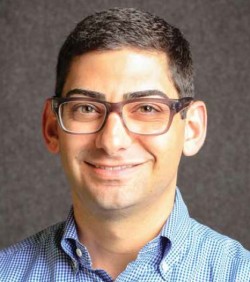 When a certain German car company acquired naming rights to the Superdome in 2011, a colorful light display soon began washing over the stadium every night. It was the most significant change to the New Orleans skyline in years, and many locals were naturally curious about who was behind the artistry.

“Most people know us by that project, and we’re very proud of that,” says Gary Solomon, Jr., the president and co-founder of The Solomon Group. “But we also do a lot of other work besides lighting for buildings.”

When the company began in 2009, its first client was the National WWII Museum, and, in many ways, The Solomon Group has grown specifically for them. The firm has taken a key role in the design and installation of the museum’s theater, its train car exhibition and its submarine experience. Now the company is wrapping up its biggest project to date: 9,000 square feet of new exhibit space.

Indeed, it can be a little hard to pin down exactly what The Solomon Group does. Its domain of expertise and talent occupies the space between massive exterior lighting projects and museum exhibitions, between outdoor festival music stages and TV broadcast sets.

“We’re basically an entertainment design and production firm,” Solomon says. “We offer five essential services—design, management, production, fabrication and integration—but, at the heart of it, we are telling our clients’ stories.”

Much of the work that The Solomon Group does is unknown to the public. When fans tune into Thursday Night Football on CBS Sports, the broadcast environment where the announcers are sitting was created by The Solomon Group. When partiers at Lollapalooza in Chicago this summer were mesmerized by the amazing visual displays at the DJ stage, again The Solomon Group was behind the curtain.

“We’re a behind-the-scenes organization,” Solomon says. “Our job is to make heroes of our clients. We serve them best when no one knows we exist.”

About half of the company’s work is in New Orleans, while the rest is on the road. When projects take The Solomon Group out of town, the company doesn’t look for much support from local vendors. Instead, all the necessary staff and resources travel too. The company owns a fleet of trucks, and an internal logistics department keeps track of what gear is where.

“We’ve invested a lot in infrastructure, equipment and people,” Solomon says. “Our staff is trained in our equipment, and no one will take as good care of our gear as we do. Also, when we design something, it’s teched out with our stuff, and, even if the same equipment is available where we’re going, we’d rather use our own.”

Solomon has been interested in the technical aspects of entertainment for a long time. He attended New Orleans Center for Creative Arts in the Bywater area, and, while his peers wanted to be in the spotlight, Solomon wanted to control those spotlights. In college, his studies in lighting and production design continued at a specialized undergraduate track at New York University. While he was in New York, Solomon explored the idea of working on Broadway, but, instead, he came back to New Orleans and got a job at a small production company. That’s where he met the two others who’d become his partners in The Solomon Group.

Because of his personable nature, it was decided that Solomon would be the face and name of the company. There is a sales department, but Solomon remains active in fielding incoming calls and helping prospective clients understand how the company can help them. Often, they are not aware of The Solomon Group’s full breadth of services and how these services are tightly integrated. Solomon’s role is also to be the voice of the client in internal conversations.

After just five years, the company has 50 full-time employees and 100 permanent part-time staff positions — and its outlook keeps getting brighter. “I’ve never taken a single business class, and I can’t imagine that I need to at this point,” Solomon says. “I think I learn best at business by just doing it. I come from a family of business owners, so maybe I learned some through osmosis.”

Another notable fact about Solomon is his age. Publications often run lists of young people making waves, and Solomon hasn’t just made Gambit’s 40 Under 40 list. He’s made Inc.’s 30 Under 30 list.

“I have some gray hairs — more than I should have at 28,” he says. “But I just feel lucky that I found my calling early. I’m aware of my skills and limitations, and I found a career that’s aligned with what makes me happy. I’ve also found two great business partners, and, collectively, we’ve built something special.”

527
previous Rose McGowan: The Dawning of Hollywood’s Next Great Director
next Evolution of Law