The country music star chats about her latest success: a new cookbook 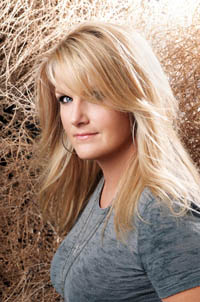 Evidenced by the gleaming twinkle in her eyes, the happiness in her voice and the undeniably positive glow that surrounds her, this year could hardly be a more stellar one for country music star Trisha Yearwood. The three-time Grammy winner–who possesses one of the finest and most well-respected singing voices ever–released her 12th studio album, Heaven, Heartache and the Power of Love, last November, making her debut on Big Machine Records, a sizzling young label in Nashville. The powerful title track was nominated for a Grammy earlier this year for best female country vocal performance, and her most recent single, “They Call It Falling for a Reason,” is impacting country radio airwaves now. But great music isn’t the only thing Yearwood is cooking up these days: In April, she released her very first cookbook, Georgia Cooking in an Oklahoma Kitchen (Recipes From My Family to Yours), published by Random House, which quickly became a New York Times best seller.

Yearwood’s passion for good home-cooked food and the celebration of family is on full display in her book, a true labor of love written with her mother, Gwen Yearwood, and her sister, Beth Yearwood Bernard. More than 120 mouthwatering and straightforward down-home recipes—from Trisha’s Homemade Chicken Salad to the Just-Married Pound Cake that Gwen made for Trisha’s wedding to megastar Garth Brooks in December 2005–are featured, along with helpful kitchen tips and gorgeous photos taken around the couple’s home in Owasso, Oklahoma. Given both New Orleans’ reputation as a quintessential food town and Yearwood’s love for this city—she and Brooks even helped to rebuild New Orleans after Hurricane Katrina—it’s no surprise that she wanted to share her enthusiasm for the good things in life with New Orleans Living!

Hey, Trisha! I got ramped up to snack several times while preparing for this interview, reading all the tasty recipes and looking at the enticing photos in your beautiful new cookbook. Everything looks delicious!

Thank you, Christine! I’m thrilled that the response to the cookbook has been so overwhelming. We’ve been doing book signings and talking a lot about the cookbook and then we’d be starving and wanting to go home and cook and eat!

You grew up in a close-knit family in rural Georgia raising chickens and cows and tending to a vegetable garden, so it’s no wonder cooking is a big part of life for you.

Yes, pretty much everything that we ate came from the farm. You don’t realize how great fresh vegetables are until you go off to college and eat butterbeans out of a can! [Laughs] It wasn’t until I left home that I missed my mom’s cooking so much that I had to learn how to make her comfort food. And all of our family time was at the table at night for dinner. We sat around the table together and sometimes talked way past dinner, and you’d get hungry again!

Oh, yeah, it’s like, okay, we’re still here—we might as well do another round of this eating thing!

Yes, exactly! You have to be careful of that! Back away from the kitchen!

But oh, it’s so good! And it’s so meaningful that you actually wrote this book with your mom and your sister and dedicated it to your father, Jack. One of the most touching gifts that I’ve ever received was a spiral-bound book that my mom put together of treasured recipes from family and friends that we’ve all loved for years, and it seems like that’s what you’ve done with the cookbook.

Yes, and that’s how it started with me. I had a shoebox full of recipes, but when I moved out here to Oklahoma, I found myself calling home for more recipes. For my birthday a few years ago, my mom, my sister and my sister’s daughter, Ashley, put together a spiral notebook with all these recipes, and I thought it was so awesome. Another reason I’m proud of it is that it was such a personal thing for the three of us. My father was a great cook, and this is a great tribute to him for our whole family. He was one of those guys who loved to cook for a crowd and loved when people him; I love to cook, and I love it when people enjoy what I cook. Sort of like applause, you know? I’ve got some deepseated need for verification!

Well, I hear that you make a really mean chicken salad and that friends stop over at your house during their lunch breaks from work to gobble it up. There’s your verification!

It’s true! In fact, I just cooked chicken last night, and I’ll be shredding it this afternoon. It’s funny because if one friend in particular sees the chicken go in the pot, she knows I’m making chicken salad and she’ll show up with those little plastic Ziploc containers! I’ll make a huge vat of it because it disappears fast. It’s the ultimate compliment, and although music is obviously my passion, it’s fun for me to be known for something else.

You’ve traveled and enjoyed food all over the world, but is down-home Southern cooking still your favorite?

It is. I’m like, Okay, let’s see what fried rattlesnake tastes like! [Laughs] I try it all because I don’t want to pass up an opportunity to see if I like something. But yes, it’s funny how food is so connected with emotion and memories of childhood. For me, it’s not just about taste, but it’s remembering when my grandmother used to make homemade biscuits every single morning and that kind of stuff. And people tell us that the recipes in our cookbook feel like food they grew up on, too. People are almost reliving their childhoods with this cookbook.

So is that German Chocolate Cake With Coconut Frosting really Mr. Trisha Yearwood’s favorite recipe from your cookbook?

Absolutely! [Laughs] He likes everything. Part of the chicken for the chicken salad today I’ll use for a chicken broccoli casserole, because he likes the kind of meal where everything’s in one bowl, and that’s one of his favorites.

So how did he earn the nickname, Gartha Stewart, that you mention in your cookbook? Is he going to be putting out his own cookbook one day?

Oh, no, he’s only got a few recipes; he says it would be more like a pamphlet! Before I came on the scene he was a divorced dad with three daughters that he had every other day, so he learned to cook, from starting out grilling steaks to making spaghetti. And I was making the recipe in the cookbook for the pasta salad I’ve made for years, and he came in one day and said, “You know what, let’s try putting tortellini in it, and instead of letting the pasta get cold first, why don’t we put the cheese in when it’s hot.” So I nicknamed him Gartha because he’s always taken a recipe and tweaked it a bit, and he’s actually pretty good at it.

I know you love to be in the kitchen, but do y’all go off-campus for food often? I want to know if there are ever any Garth Brooks sightings at Starbucks drive-throughs in Oklahoma!

Occasionally we’ll go out to dinner, but we like to cook at home, and we’ve got three high school–age girls in the kitchen that are really good at chopping vegetables and marinating steak—they get right in there and help. And this is funny—Garth will go to Starbucks only for his girls; he doesn’t even drink coffee! The girls love Starbucks, and if he has to drive them through, he has to try and name all the drinks and get a splash of this added to this drink and that to that drink, and he really doesn’t know what any of it is! So he says it all wrong and the person behind the window is like, “What? What do you want?”

That’s a trip! And you’ve got another reason to be really proud right now: Your latest album, Heaven, Heartache and the Power of Love, exudes excitement. You sound like you’ve been invigorated. The title song is a powerhouse!

Yes, I think I’ve been invigorated as well. I tend to lean towards these big gut-wrenching ballads; I love to sink my teeth into those songs. So it’s always a challenge for me to find up-tempo songs that still have a lot of meat to them. I love this song because it’s about everything—the good, the bad, the ugly; it all makes you who you are. It’s like if you make it through and you end up on the other side, it’s all good. The way it was written and the way the musicians played it, it’s just on fire. And that energy just kind of transferred into the studio. I’m not a songwriter, and it was effortless finding the songs this time, and usually it’s hard to find those twelve songs that feel like they’re yours when you’re done with them. I felt like these songs were just meant to be.

I keep this chicken salad in the refrigerator pretty much year-round. It’s easy to make, and it keeps in the fridge for a week. Of course, at my house, it only lasts a few days! I serve this on toasted bread or with wheat crackers as an appetizer. From Gwen: It may sound weird, but I love this for breakfast on a slice of toast!

Place the chicken in a large pot with water to cover. Add the salt, bring to a boil, then reduce the heat to a low simmer and cook the chicken until tender, about 45 minutes (see note). Drain the chicken, cover and refrigerate until cool, or up to 24 hours. Pull the cooled chicken into shreds and place in a large bowl. Add the eggs, relish, and mayonnaise, and stir together gently until well mixed. Season with salt and pepper. Note: You may also cook the chicken in a pressure cooker, in which case you should reduce the cooking time to 15 minutes.