Expand your horizons at this month’s festivals 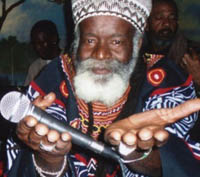 August is teeming with statewide festivals, including the Shrimp and Petroleum Festival (www.shrimp-petrofest.org), Louisiana Zydeco (www.zydeco.org) and Southern Decadence (www.southerndecadence. com). This month, we’re keying in on a select few, slightly lesser known fests that showcase the foods of India and Jamaica (Africa and the Caribbean, too), and one that celebrates a Louisiana favorite: duck, feted from beak to tail.

Whether it’s a quick trip to Kenner or a longer trek to Gueydan or Lafayette for great food, cooking contests or culinary cultural enrichment, the experience is well worth a splurge on gas to get there. Fill’er up!

INDIAN FOOD FESTIVAL
August 17
(www.indianeworleans.com)
There are two Indian restaurants in the metro area, and both enjoy immense popularity, namely because the flavors of India intrigue the palate with spices of turmeric, curry, cumin and cardamom woven around vegetables, chicken and lamb cooked tender. Lately, Indian spices have been celebrated for their health and weight-loss benefits. Health claims aside, Indian food is absolutely delicious and the cooking style is a perfect foil for Louisiana products like fish or okra curries (stews), ramped up with Creole tomatoes, squash, beans and more. Indian breads, such as naan, chapati and piratha, boast their own distinct texture and flavors. Derived from wheat or chickpea flour, the breads are either flipped on the griddle or baked against the wall of a tandoor oven. The Indian Food Festival presents a great opportunity for culinary exploration; there is nothing but heavenly aromas and flavors to dive into.

DUCK, DUCK, GOOSE
August 21–24
(www.duckfestival.org)
As much about calling, carving and hunting ducks as cooking and eating the birds, Gueydan, Louisiana, the “Duck Capital of America,” has held an enormous (10 acres’ worth) duck festival for over 30 years. Many dishes are prepared with wild game—pot-roasted teal was a winner one year—and given away (a state requirement), but there are also the “usual suspects”: food booths for those with more tame or traditional tastes. The duck and goose outdoor cooking competition pits pros and amateurs against one another to determine whose cuisine reigns supreme. The outdoor cooking contest is scheduled for Sunday, August 24, at Duck Festival Park. Registration is 6 a.m., followed by judging at 11 a.m. After judging, those dishes can (and should) be tasted be everyone. Keep your eyes peeled for one of Louisiana’s favorite chefs, John Folse, a big fan of this festival and a serious duck cook and connoisseur.

REGGAE FEST
August 29–31
(www.lafayettereggaefestival.com)
The Reggae Fest has been a part of Lafayette’s festival lineup for 18 years. Musical headliners like Eek-a-Mouse and Pato Banton serenade festivalgoers wandering the grounds absorbing global culture and spectacular food. This year, festival owner-creator, Nigerian-born Chief Chris Ena Omigie (also a 26-year veteran radio jock on 770-AM, Saturdays 6 to 8 p.m.) is bringing it on bigger and better in anticipation of next year’s 20th anniversary. Expect to rock some goat and chicken curries along with plenty of Jamaican, Caribbean and African specialties prepared by local food folk and guests from Florida and Atlanta. Like most royals, Chief Omigie is quite selective when it comes to food (he also owns Visions Bar & Grill), so expect good things to eat and check out the arts and crafts while bopping to reggae rhythms.