Tea Time! Big Easy ‘Bucha invites you to drink up. 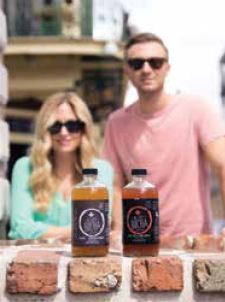 Though kombucha tea has been touted as a health-boosting beverage since the early 20th century, and was reportedly invented much earlier, the fizzy, fermented drink has only recently gained traction in mainstream circles. Kombucha is made by fermenting a culture of bacteria and yeasts in tea, leading to a beverage that can range from tangy to sour, sweet to strong.

“Kombucha is amazingly healthful,” says Alexis Korman, who co-founded New Orleans-based Big Easy ‘Bucha with Austin Sherman six months ago. “It’s a great replacement for sugary sodas because it is naturally sweetened, but not loaded with sugar. In addition, it’s packed with healthy bacteria, probiotics and antioxidants, and is so good for your digestive and immune systems.”

With Big Easy ‘Bucha, Korman and Sherman aim to offer an alternative to sweet tea and oversized sodas. “We’ve both been drinking kombucha for what seems like ages!” Korman says. “We thought New Orleanians deserved to have their own handcrafted, artisanal, locally made kombucha with really original flavors.”

The two tea lovers give their kombucha a boost by serenading it with music — hence one flavor’s “Jazz Juice” moniker. “At the end of the day, kombucha is a raw and living beverage,” Korman says. “Music makes us happy, so we figured playing some NOLA jazz to our tanks would make our kombucha happy too.”
Korman and Sherman suggest trying kombucha as an alternative to soda in your next cocktail. Big Easy ‘Bucha’s “Cajun Kick” flavor, infused with citrus, ginger and cayenne pepper, is an especially good mixer. “We use it in mixed drinks all the time,” Korman says. “Austin was trying to come up with a more healthy ginger beer alternative, and this is it.” bigeasybucha.com

Vegan Vision: Discover Bhava — a tasty treasure in the Bywater.

You might know chef Anne Churchill from Karma Kitchen, the catering and food wholesale business she started in 2004. You might know her from dinner service at the former Bridge Lounge. You might be a musician — in which case Churchill may well have cooked for you on tour.

Or, you might know Churchill from Bhava — the cozy, 30-seat vegan restaurant above Feelings Café in the Marigny, which she opened with Feelings proprietor Jim Baird last November. “The atmosphere is warm and welcoming,” Churchill says. “It’s kind of romantic, and a little sexy, I think. It also feels like you’ve stumbled on a secret, as you have to go through Feelings, up the stairs, out on a balcony and in the door to find us.”

Churchill has long been committed to supporting sustainable food systems, cooking healthy dishes and offering vegetarian and vegan options. “I feel better when I eat less meat and dairy,” she says. “I look better, too. It’s also the best thing one can do for the environment in terms of personal impact. Meat and dairy are really hard on the environment, and not that good for us.”

The chef and her crew make all of Bhava’s dishes from scratch, shopping for ingredients locally. “Farmers markets, Whole Foods, Hong Kong Market — we forage,” she says. “After all the excess, sometimes it’s nice to give your system some easily digestible, nutrient-dense food that happens to be delicious.”
According to Churchill, Bhava has helped spark a growing movement in the city’s decidedly non-vegan culinary scene. “Vegan is a new niche in New Orleans,” she says. “We opened; then [came] 3 Potato 4, then Sneaky Pickle and Seed. Now it’s a thing.” Mark your calendars: Bhava is open just three days a week (Thursday through Saturday, from 6 pm to 10 pm).

When she’s not serving up vegan fare at the restaurant, Churchill caters, cooks for private clients and works in her garden. She kicks back by watching Netflix shows. “Mind of a Chef is awesome!” she says. bhavanola.com

Way to Grow: A local entrepreneur gets his hands dirty.

It’s a sad reality that often, fresh fruits and vegetables are more expensive than canned or processed versions — but what if you could grow your own? Henry Clay duQuesnay hopes to give you that option soon. Describing himself as a “serial entrepreneur looking to move on to a new project,” duQuesnay founded Earth Prime Incorporated in April 2011. “I thought making better use of green space was a great idea, especially with the favorable climate in New Orleans,” he says.

DuQuesnay is working on making Earth Prime’s first product — a vertical, hydroponic gardening system called iGardenX — available to the public. “We will be offering two products: our custom parts for a ‘Custom Builder’ version, and our IKEA-like, out-of-the-box version,” he explains. “It pays for itself with fresh food, virtually wherever you are in the world and just outside your door.”

With the release of iGardenX, DuQuesnay plans to call out “Big Oil” companies like BP and Shell. “If they care about the environment and reducing their carbon footprint, they will buy these super-efficient food systems and donate to community organizations like Hollygrove, the Healing Center, Liberty’s Kitchen and other such groups helping people feed themselves,” he says.

DuQuesnay is currently seeking — dare we say it? — seed funding for the iGardenX system. “Imagine waking in the morning, walking to your backyard or balcony and picking fresh bell peppers, tomatoes, maybe some basil — and cooking a farm-fresh omelet within 10 minutes of waking,” he says. “Most people would think this is impossible, expensive or hard to do, but it’s not. And it doesn’t have to be ugly or space-consuming. It can be quite beautiful.” earthprimeinc.com

470
previous The Power of Protein
next Look Good, Feel Better