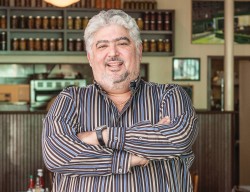 New Orleanians can count ourselves lucky that Adolfo Garcia strayed from his original career goals. The child of Panamanian parents, Garcia grew up in Metairie. As a teenager, he worked in restaurants, making his way up the service industry ladder while studying political science, history and Latin American studies at the University of Texas, Austin. “I was on a career path to be a lawyer, and the closer I got to that goal, the less I was convinced that was what I wanted to do,” he says.

After graduating from college, Garcia returned to New Orleans to work. He applied to the Culinary Institute of America in Hyde Park, New York — and when he was accepted, he started a “whole new life,” he says. “I got a suitcase. I didn’t even know where I was going. I’d never been north of Slidell.”

Garcia stayed in New York for nine years, getting married and starting a family. “The whole time, I was working in big restaurants as I honed my craft,” he says. “‘Craft’ is a very important word for me. I think what we do is a craft, not an art. So many people want to go to culinary school, and they think of it as an art — but you have to know how to use your tools.”

During his tenure in New York, the chef continued to visit New Orleans. “I saw the culinary scene in the city really moving forward,” he says. “It was kind of like a game of jump rope. I was waiting to jump in.” When he saw Susan Spicer, John Neal and other chefs exploring new takes on New Orleans dishes, Garcia knew it was time to join the game. “I said, ‘I’m going to take advantage of the fact that I’m Latino, and my cultural background,’” he recalls. “‘I’m going to pin my success on that unique heritage.’”

His first New Orleans venture kicked off a long career of inspired cooking and fruitful partnerships. “What we did at that point was groundbreaking,” Garcia says of Criollo Restaurant in the Hotel Monteleone, where he and a partner incorporated Latin ingredients and flavor profiles into a “very contemporary framework.”

Next came RioMar, a seafood and tapas venture in the Warehouse District, which Garcia opened in partnership with Dr. Nicolas Bazan. “He had blind faith in me, and did a lot for my career,” Garcia says. A string of eateries with lyrical names followed: La Boca, a Mano, Gusto — and in 2012, Garcia and multiple partners opened High Hat Café and Ancora Pizzeria & Salumeria next door to each other on Freret Street.

“I’m never alone,” he says. “I have more partners than you can shake a stick at. That’s my formula — teaming up with people I respect and have faith in, and using my experience and resources to be successful.”

This month, Garcia will receive the New Orleans Hispanic Heritage Foundation’s Galvez Cup to honor his support of the organization over the years. “I’m definitely humbled by my selection,” he says. “To me, it will be a bookmark in my career, where I can feel like the work that we do … has an impact on the younger generation.” The award presentation takes place at the foundation’s Azúcar Ball, an annual celebration of Latin culture; this year’s theme, “La Bamba,” pays homage to Mexican food, art and dance. “Their growth has been incredible,” Garcia says of the foundation. “Azúcar is the premier Latin social event, and now everybody wants to be there.”

Though his restaurant concepts surpass continental borders, Garcia is happy right here. “I think I decided a long time ago that when I leave New Orleans, it’ll be in a box — if I leave,” Garcia says. “I feel 100 percent New Orleanian, but I also feel 100 percent Latin. I consider myself bicultural.”