There are few players more transformative in any NFL franchise’s history than Drew Brees during his Saints tenure. Before his arrival, the Saints won one playoff game and had two seasons of truly superlative, All-Pro-quality quarterback play (those by Archie Manning in 1978 and 1979). 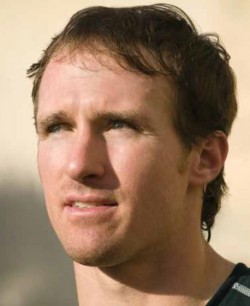 After Brees’ arrival in 2006, the Saints have been in the playoff race every year and the team has had a winning playoff record, including a Super Bowl title. Also since 2006, Brees has been named All-Pro every year but one; and he has emerged as a yearly MVP candidate along with Tom Brady, Peyton Manning and Aaron Rodgers.

He is currently setting NFL records for career completion percentage and pass completions per game, while, in various seasons, he has also led the NFL in passing yards, pass completions, pass attempts, passing touchdowns, passer rating, net yards per pass attempt, completion percentage, passing touchdown percentage and sack percentage. He has thrown for over 5,000 yards four times, while no other NFL player has accomplished that more than once, and he has reached 40,000 yards passing with one club faster than any player in NFL history, including Dan Marino with the Miami Dolphins or Payton Manning with the Indianapolis Colts.

Yet 2014 has shaped up as yet another critical season for a number of reasons. Key role players Darren Sproles, Mark Ingram, Kenny Stills, Jimmy Graham and Joe Morgan have all either moved on or missed time with injuries. In the first game versus the Atlanta Falcons, Brees doused questions about his preseason oblique injury, throwing the ball crisply and accurately from the beginning. Brees’ numbers were typically excellent in the way that fans have grown accustomed to, with a healthy 69-percent completion and a similarly good 7.9 yards per attempt — and all the while, he also hit seven receivers along the way. However, the large majority of his completions, 26 of 29, went to Jimmy Graham, Marques Colston, Pierre Thomas and Brandon Cooks, which together with the stronger running game, accounted for a much more ball control-oriented offense than Saints fans have seen over the Payton years.

Against the Cleveland Browns, Brees led his team back from a rough start with three straight touchdowns, including a gutsy 85-yard drive to get things rolling, and he relied upon Graham for two of the scores. In the following game versus the Minnesota Vikings, Brees worked backup tight end Josh Hill into the game plan as he caught him in stride on a beautiful 34-yard seam pass of the sort usually reserved for Graham. In the fourth game, versus the Dallas Cowboys, the Saints introduced Travaris Cadet into the game plan as Brees connected with him six times for 59 yards and used him to continually create mismatches against the Cowboys’ linebackers. Brees also hit Hill for yet another touchdown. Though the new wrinkles came too late to win the game, the strategy did almost appear to make a real game of things in what would eventually prove to have been a classic buzz-saw. road-trap game from the beginning. Against the Tampa Bay Buccaneers, in game five, Brees showed his well-known leadership and determination as he again used his new factors, Hill and Cadet, ably, finding Hill for yet another long gain (for 37 yards) and Cadet for a touchdown.

Remarkably, throughout this early-season stretch, Brees produced his usual gaudy yardage and completion numbers, yet he leaned on a totally different set of players and skills in doing so. Saints fans saw the usual reliance on Marques Colston and Jimmy Graham but also a new variety of screens and short-burst passes to Pierre Thomas and Brandon Cooks, as well as Josh Hill and Travaris Cadet forming the final pieces in Brees’ new look. Ultimately, after eight seasons of blazing fireballs and lightning-like deep strikes, Saints fans should be able to look forward to several more years founded on cagey veteran decision-making and a host of new role players to carry the winning tradition forward.