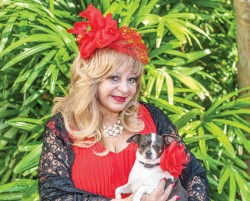 Darling — if you haven’t met Margarita Bergen, you probably haven’t been to a New Orleans party in the past 30 years. Known for her presence at soirées all over town, Bergen is legendary for her wild hats, irrepressible spirit and endless enthusiasm.

Born in the Dominican Republic, Bergen moved to New York City as a teenager, where she earned a master’s degree in bilingual education at the City College of New York. She followed that degree with a post-master’s in administration and supervision of schools, working with public schools throughout the state of New York and consulting with the U.S. Department of Education.

Bergen came to New Orleans for the first time in the late ’70s, after breaking up with her boyfriend in New York. “My mother was living here,” Bergen says. “She took me to this gallery, and I fell in love. I thought it would be fun to work in a gallery like that.” In 1983, she opened Bergen Galleries, a French Quarter art emporium, which she operated for nearly 20 years. She sold the business in 2000, moving from her apartment above the gallery to a space in the Marigny.

When Bergen isn’t showing gallery visitors around the shop, she rarely sits at home. Calling herself a “social butterfly” and a “party animal,” she stops by multiple parties and events per night to catch up with friends and meet new people. “A lot of people say, ‘I don’t know how you do it,’ but I’m blessed with boundless energy,” she says. “There are so many things that I love, and I love people, so I feel that I have a need to show my face — and they say that it’s not a party ‘til I get there.”  She’s almost always accompanied by Duchess Chiquita, her Chihuaha. “The love of my life is Chiquita!” she says. “She is my constant companion.”

Over the years, Bergen has become a key part of New Orleans society, her attendance at exciting events just as natural and necessary as masks at Mardi Gras. She’s been named one of New Orleans CityBusiness’ Women of the Year, and has reigned over several Carnival krewes, including Cork and Shangri-La. “I was the first local queen of the Carnaval Latino,” she says.

Along with toting Chiquita, she often carries a camera to snap photos of party guests having a good time. “I’m very fortunate, because I take nice photographs,” she says. “They may not be the best-quality photographs, but the expressions on people’s faces — they are so happy to be
photographed.”

Bergen has taken advantage of the advent of social media to share her enthusiasm and nightly itinerary with more fans and friends. “New Orleans has so much to offer,” she says. “Before, there were not too many places that knew what was going on. Now, because of social media, it’s so much easier for me to share.”

Her weekly blog offers a roundup of her adventures; it’s punctuated with adjectives like “fabulous,” “lovely” and of course, “darling.” “I like writing
blogs,” Bergen says. “I’m not a fiction person. I like to talk about my experience.”

So how does Bergen recharge her batteries? By keeping Sunday sacred. “I never go out on Sunday nights,” she says. “I like to rest — that’s when I put together my blog, too.”