The creative, intelligent and adorable Star of NCIS: New Orleans basks in a No. 1 hit-show glow, relishes life in New Orleans and strives to be an inspiration to others. 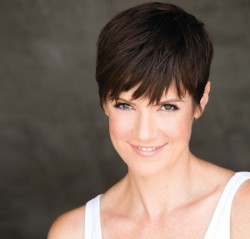 When Zoe McLellan was a little girl, she announced to her aunt that she wanted to be “inside the TV.” The gifted and talented actress has not only achieved her dream of appearing on television and in memorable movies on the silver screen, she’s made a most indelible mark thanks to the dedicated work she’s infused into all of the characters she’s played, including her starring roles on the series JAG and Dirty Sexy Money, and in film, where her credits include Dungeons & Dragons, Inventing the Abbotts and Mr. Holland’s Opus.  And with her exciting new turn as special agent Meredith Brody on the freshman CBS mega-hit show NCIS: New Orleans, McLellan believes she’s taken on a truly special and life-changing role.

“The moment I read Brody, I felt in a way that I’ve never felt about a role — it was mine,” she says. “I felt that I needed to tell her story; I needed to be her. The character really hit home and came naturally to me. It felt like a destiny sort of thing. I felt so right on about it.” Brody, a tenacious yet charismatic interrogator, is a fish-out-of water type who has transferred from the Great Lakes office to New Orleans looking for a new lease on life.

That deep connection McLellan made with Brody has obviously translated fabulously to viewers. The premiere episode of NCIS: New Orleans (a spin-off of NCIS), the leading scripted show on television today, attracted a phenomenal 17 million viewers. That audience expanded to over 20 million after DVR stats were added. The popular show, which centers on members of the local field office in New Orleans who are investigating criminal cases affecting military personnel, has been extremely popular amongst New Orleanians as well.

“It’s very important to all of us — the producers, the writers, the directors and the actors — that we do this city right,” McLellan says. “One thing I love about this city is the pride that people have for it. I’m just so blown away by the hearts of the people that are from here. So we want to make you proud with this show.”

And although McLellan claims she’s currently a guest here in New Orleans, it’s clear that the natural beauty is becoming more physically and emotionally integrated with the city on a daily basis. “I’m becoming a local, yes, but I feel like I need to earn my stars here,” McLellan says. “It is such a heart-centered city. I feel the heart here. I’ve never felt more at home in my life at a place — ever! It was easy to move here. Granted, I have family here helping me and telling me to go try this; go eat here. My great grandfather’s brothers started Boh Bros. Construction, and I have a ton of cousins here that I just love that I grew up visiting. So the show just felt so ‘meant to be.’ Everything about it still feels that way. It feels like goose-bump type of stuff! I wake up in the morning, and I feel like I belong. I love Mid-City; I love the Garden District; I love it all! I never had a desire to buy a house in L.A., and, maybe someday I will move here permanently, because I feel like I want to plant roots in New Orleans. It’s beautiful.”

Recently, another nine episodes of NCIS: New Orleans were picked up — in addition to the 12 episodes originally ordered for the inaugural season — making its future look brighter each day. And although she’s not one to count chickens before they hatch, McLellan would love to see the show continue for a long time.

“I’ve never enjoyed a job this much,” she says. “Ever! Scott Bakula and Lucas Black [who portray NCIS special agent Dwayne Pride and NCIS special agent Christopher LaSalle, respectively] are so great, and they’re a lot of fun to work with. Scott is one of the most grounded human beings I’ve ever met. He’s a good, hard-working man and a great actor. He looks out for us, and he’s always looking for ways to help everyone and make things better. I don’t know if he’s open to it, but I’d love to work with him as a director! And Lucas is such a blast to work with. I’m getting to know the city through my job — I go on swamp tours; I’ll go to Covington; I’ll go to the middle of nowhere. I love working in the French Quarter; it’s wild and intense, but it’s fun because you’re really in it. We talk about New Orleans being a character in our show — she’s the leading lady — so I really feel it helps us get into it, even the smell of the French Quarter,” McLellan laughs. “It feeds what we’re doing.”

McLellan is enjoying doing her own stunts in the show. “We all have doubles for the really dangerous stuff, but, anything that I can do I do, and I love that,” McLellan says. “It’s nice to go out and be physical and work your body and use your power and trust yourself. I had a big fight scene with a female assassin in the French Quarter in the middle of an intersection, and it was really empowering, because, in my personal life, I do yoga; I’m very feminine; I’m very soft; and this character forces me to be badass! I will say you’ve got to have your bag of tricks for this job and picture other people’s faces or whatever you have to do to get mad and really put yourself in the story. I interviewed some female NCIS agents prior to shooting, and everyone said the same thing: ‘We’re here to get the bad guy.’ So I keep that in mind.”

McLellan was born in La Jolla, California, and grew up in Washington before she moved to Hollywood. She has been artistic and imaginative since childhood; her creativity doesn’t stop at acting. She’s a singer/songwriter who performed her own original music in the show L’effleur des Sens at the club King King Hollywood. “I worked with my friend Cati Jean in this very sensual show and did a song hanging from the ceiling. Oh, it was so much fun! For me, there is nothing more vulnerable than singing my own songs. I love singing, and perhaps we’ll hear more of my songs one day. My dream would be to connect with some musicians in New Orleans and record some songs. It’s such a healing process to share your stories through your music.”

Another passion of McLellan’s is inspirational speaking. “One thing I really love to talk about is what I call the “Inspiration Equation,” because Einstein is my hero, and it’s a really simple equation,” McLellan says. “It’s: Who are you? Be that. What do you love to do? Do it. And who do you love? Love them. And that equals a fulfilling and blessed life. I tap into myself constantly and ask, ‘Am I living this equation? Am I doing this?’ So I usually speak about something like that.”

Another goal of mine is that I want to speak at schools to kids around sixth or seventh grade, or high school, when they’re getting to that point where they’re thinking about what they want to be when they grow up,” McLellan adds. “My parents didn’t encourage me to act professionally as a kid, and I’m glad because I got to be a kid and play around. And then I went and did it on my own when I was older. But I do encourage people to follow their hearts, and listen to their gut and their true voice, and be true to themselves. I really love the idea of helping people follow their dreams and make their plans. There are steps you need to take; there are tons of people with dreams, but you’ve got to have the work ethic and that determination. Let me tell you, I’ve been rejected and heard ‘no’ plenty of times. You have to have that belief in yourself. I would never encourage someone to just go and quit their job if they don’t like it, but they can start doing what they love and see how they can maybe switch out when the time is right. Life is so short! The other thing I ask is, ‘Where do you feel you’re seen, heard and needed the most?’ That’s where you belong! I’m also a licensed esthetician. I love skin care and pampering people, and I’m a big believer in following all the passions you have. It can be 10 different things, and that’s OK.” McLellen is currently writing an inspirational book that she says will be categorized in the self-help section of bookstores.

Right now, McLellan is truly in the moment of NCIS: New Orleans. “It’s such a joy,” she says. “I feel like even through the show, I’m helping people feel like they’re not alone. And I’m hoping they can connect with Brody. I want to make people proud and happy. I want to inspire people. I am hopefully doing my inspirational stuff through the show, because, if I can make someone’s day and make someone smile and laugh a little bit while they’re watching TV, I’ve done my job.”