Home IN THIS ISSUE The Unstoppable Jimmy Graham
IN THIS ISSUE
SPORTS
November 30, 2014 Paul Wegmann 0

No play has been more telling of the towering presence of Jimmy Graham on the field, and in the hearts of New Orleans Saints fans, than his nearly game-ending exploit at the conclusion of regulation in the San Francisco 49ers game. 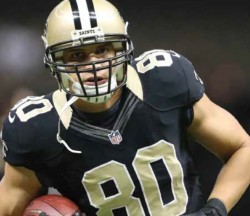 During a game in which the Saints felt their backs pressed firmly against the Mercedes-Benz Superdome wall all game long — having been down 14-0 and then 21-10 in desperate straits — Drew Brees hit Graham once for a touchdown to draw to 21-17 in the third quarter and then again for a second to take the lead at 24-21 late in the fourth quarter. Then, after having suffered the shock of a 49ers quick-strike field goal to tie the game when all had seemed over, the Saints managed to creep to the opponent’s 47-yard line, with one last arrow left in their quiver with no time remaining.

Throwing the ball like a mortar round, Brees delivered it right into the outstretched arms of Graham (who had outmatched not one but two 49er defensive backs, apparently resurrecting an improbable victory from the jaws of doom). The home-crowd erupted in a glorious celebration; it seemed a classic ending had occurred before their very eyes, and the Saints were moving on to their next Dome victim. The only problem was that one of the two defenders performed a ham-fisted, vaudevillian pratfall onto the Superdome turf, leading the referee to believe that the great, big Graham had shoved his opponent out the way and thereby committed offensive pass interference. The play was a perfect microcosm of the 2014 Saints, as is Graham — a team and a player unwilling to ever surrender hope of a victory — determined to do all the right things up until the very end.

Graham’s dominance can be seen in his effectiveness. Through nine games, Graham caught eight receptions inside the opponents’ red zone (the 20-yard line) — and he converted six of those catches into touchdowns. Overall he caught 56 receptions through the first nine games, and turned 38 of those catches into either first downs or touchdowns. His 74.7-percent reception stat was one of the best in the league, and all the more remarkable considering that he was leading all tight ends in targets (75 in all), despite having been injured for a good part of two games.

What is most remarkable about Graham’s efficiency is the manner in which he accomplishes his job — most frequently with defensive backs draped all over him. In the San Francisco game, Graham’s first touchdown occurred as he awaited a spinning Brees to evade the rush and caught a red-zone pass by boxing out a safety that hung on him like a discounted suit. The coverage was flawless, but Graham made the play look easy. In the fourth-quarter score, which the Saints desperately needed, Graham ran a simple out pattern toward the sideline of the end zone, and Brees threw a back shoulder pass, which Graham caught, again with a defender in position to make the play.

Together, Brees and Graham repeatedly make this pass almost routine. And as long as Graham has single coverage, and even sometimes when he doesn’t, the pattern appears unstoppable. In fact, Graham may be the most valuable red-zone target in the league and more effective than any running back, wide receiver or other tight end in the league. Looking further back in time, it’s open to debate whether Jim Brown, Walter Payton or any of the other running greats were ever as efficient at scoring as Jimmy Graham in combination with Drew Brees — considering that currently 75 percent of his red-zone opportunities translate into touchdowns.

Graham’s scores also come when they are most needed by the Saints. Against the Carolina Panthers, with just three seconds left, Graham again was faced with single coverage on the outside. Near the end zone, this almost always guarantees a score. Indeed, to achieve this, Brees sent Graham in motion toward the sideline; Graham ran a quick out; and Brees again laid yet another back shoulder throw softly into Graham’s reach after having boxed out the outmatched defensive back.

Earlier in the season against the Cleveland Browns, facing a deep 16-3 deficit, Graham proved his weight in gold, digging his team out of that hole with scores in back-to-back drives. Again with just three seconds left in the first half, and after having been almost the entire focus of the preceding 85-yard drive, Graham out leapt all-pro cornerback Joe Haden on a nine-yard touchdown pass — in what was yet another back shoulder throw delivered to perfection by Brees. The second touchdown was another example of Brees sending Graham in motion, and, then, after Graham had run a simple backyard down and out, achieving single coverage on the cornerback, the play led to a fast flip for a three-yard touchdown. Just as in the San Francisco game, after having been down two scores, by the time Graham and Brees had finished their handiwork, the Saints had claimed a 17-16 lead, deficit erased.

Together these two players make touchdowns from short distance look as classically unstoppable as a Jim Brown touchdown sweep, a Walter Payton leap into the end zone or an Earl Campbell off tackle scoring plunge. The maneuver has become that dominant, and it should start to dawn on Saints’ fans that they will be witnessing greatness similar to the work of hall-of-famers and legendary connections — like Unitas, Berry, Montana and Rice — in the coming final years of Drew Brees’ career. Yes, it is that good!