Refreshing frozen treats are cold comfort in the summertime heat 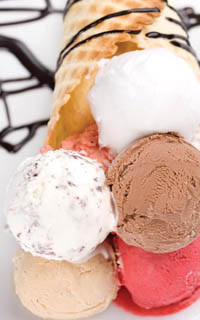 I scream! You scream! We all scream for ice cream! Growing up in New Orleans, with its heavy Southern air and long summer days, there was nothing more thrilling than the circuschime sound of the neighborhood ice cream truck as it slow-crawled down the street. Every now and then the ice cream man clang-clanged his bell, just to make sure you were listening.

All around the neighborhood little ears perked up, and we dropped whatever game we were playing and bolted inside to grab a dollar from Momma’s purse. Racing down the block, finally catching up to the square truck adorned with cartoons and bright colors, we would stare up in awe at the swirling menu that seemed to dance on the side of the truck. Mr. Ice Cream Man’s bubble face would beam down from the window: “What will you have today?” Oh, so many choices … vanilla, chocolate, strawberry. How to decide?

Somehow I did and then the most satisfying of all: a creamy scoop atop a crackly sugar cone, little rivers of sweetness sliding down my chin. Nowadays, there are ever more delectable treats to tickle one’s fancy, from old-fashioned ice cream in a 101 flavors to crisp, fruity sorbet and Italian gelato, each offering its own special taste and texture.

Ice cream, that luscious blend of milk, sweet cream and sugar, whipped to airy confection, is perfect anytime on a cone, in a split or in a bowl. Ice cream is America’s choice for frozen dessert. And while vanilla remains the number one favorite—amounting to half of all ice cream sales—ice cream has come a long way from three humble flavors. Gourmet ingredients, like fudge, cookie dough, fruit bits, chocolate morsels, nuts, marshmallow and caramel, are artfully melded into uniquely flavored creamy delights to tempt the taste buds. Topped with whipped cream and crunchy nuts, it’s a little slice of heaven!

Sorbets are a tasty and refreshing summer treat as well. Made with sweetened water and fruit puree, sorbets are a dairy-free, nonfat or lowfat alternative to ice cream. Unlike ice cream, sorbets are dense in texture, which results in bursts of intense flavor. Sorbets can be smoothtasting— although noticeably less smooth than ice cream—or granita-like with chunky ice crystals. Flavors range from sugary sweet to savory. Chefs use sorbets in a variety of ways, such as presenting a crisp lemon sorbet as a palate cleanser or as a light dessert, adding unexpected flavorings like coffee or chocolate. Some innovative chefs have even taken to creating savory sorbets such as cucumber, tomato and roasted red pepper. Sherberts are sometimes confused with sorbets. Although both are made with fruit and come in flavors like coconut, mango, watermelon and lime, the biggest difference is that sherberts contain a small amount of milk or cream and are typically lighter and smoother.

Gelato is Italy’s answer to ice cream, but with a few notable differences. Like sorbet, gelato is made without the introduction of air, so gelato is also more dense than ice cream. Containing less fat, gelato melts easier, and because it’s less solidly frozen—which enhances its flavor on the tongue—gelato is served at a warmer temperature than ice cream.

Rich and velvety, gelato combines a host of natural ingredients, such as fresh fruit, pure chocolate chips or flakes, shaved coconut, bits of nuts, cookies or biscuits, and comes in a range of vivid colors and highly concentrated flavors, like hazelnut, pistachio, banana and tiramisu. Italian food is fiercely regional, thus the gelatos of Northern Italy tend to be richer and creamier, made with eggs and whole milk; those from Southern Italy tend to be lighter in texture and more fruit based, also known as sorbetto. For a sweet escape, visit these local parlors: