Prospect.3: Notes for Now – This massive arts event is a marathon, not a sprint. 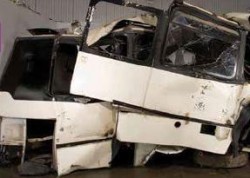 Remember those Prospect.3 opening parties you attended, way back in October? The sprawling art biennial hasn’t ended yet. You have until Jan. 25 to see the shows you’ve missed — and, with nearly 20 locations displaying the works of 58 artists, no one could blame you for not getting to all of it yet.

The first Prospect New Orleans biennial took place in 2007, conceived by curator Dan Cameron and supported by philanthropist Toby Devan Lewis. By inviting contemporary artists from around the globe to show work in New Orleans, the exhibition’s goals have always included highlighting the culture of New Orleans and the Gulf South, and opening a global dialogue about art, its place and its value.

Franklin Sirmans, department head and curator of contemporary art at the Los Angeles County Museum of Art, took on the challenge of curating Prospect.3. Works fall into categories including “The New Orleans Experience,” “Seeing Oneself in the Other,” “The South,” “Crime and Punishment,” “Movie-going,” “The Carnivalesque,” “Abstraction” and “Visual Sound,” according to Sirmans’ notes on the exhibition website.

Think you’ve seen all you need to see of Prospect.3? Don’t forget P.3+, the satellite program filling New Orleans and surrounding areas with even more contemporary art by nearly 300 additional local and regional artists. Find more information and a map (you’ll need it!) at prospectneworleans.org.
Larger Than Life: A visual artist explores the bounds of both imagination and canvas size.

Born in Pennsylvania, artist Kate Hanrahan learned that she loved the South while attending school in Savannah, Georgia, and later, in Atlanta. “After finding myself back North working at a set fabrication shop in New York, I was really missing the slower pace of the South, as well as having a tight-knit community of friends and artists,” she says.

In 2009, she came to New Orleans, teaching after-school art classes while continuing to develop her own artistic style. “I describe my work as existing in a realm of magical realism, while creating an emotive narrative woven in between the layers of memory, loss and time,” she says. “I work in mixed media, including painting, paper cutouts, photography, installation, sculpture, video and sometimes sound.”

Hanrahan enjoys creating large-scale mural works and other projects that transform the space around viewers. “Constantly inspired by my students, I am always looking to carry through and translate, in what I create, a sense of wonderment and imagination,” she says.

Recently, she created a piece called “Alivia’s Birds” for Terratour, a collaborative P.3+ project. “Terratour is an ongoing interactive installation by different artists, combining sculpture, painting and movement,” she explains. “For my piece, I created a tiny, interactive house in collaboration with one of my 7-year-old students.” The piece features paper birds made by Alivia, Hanrahan’s student; other parts of Terratour include Hanrahan’s mixed-media work and photography.

The artist also collaborated on ExhibitBE, an enormous street-art exhibition curated by artist Brandan Odums at a blighted apartment complex in New Orleans. “It’s being called the largest street art exhibit in the South, and I highly recommend checking it out, as there are future plans to demolish the buildings,” Hanrahan says. katehanrahan.blogspot.com

Get to Know NOCCA: The New Orleans Center for Creative Arts opens a new gallery, showcasing faculty and alumni artwork.

Named for its street address, straddling the Bywater and Marigny neighborhoods, 5 Press Gallery is the NOCCA Institute’s latest project. “5 Press Gallery focuses on professional practicing visual artists with a connection to the New Orleans Center for Creative Arts, including present and former faculty, visiting artists and alumni,” says gallery director Amanda Cassingham-Bardwell, a NOCCA alum whose work was on view in the gallery’s inaugural show.

Along with supporting the careers of NOCCA artists and creating a public presence for the school’s visual arts programs, the gallery gives back to its source. “Sales at 5 Press Gallery support the NOCCA Institute, the nonprofit partner of NOCCA that provides programs for NOCCA students, faculty and the neighborhood, including an artists-in-residence program for the school, and public concert and literary series,” Cassingham-Bardwell says.

The gallery’s first few shows have aimed to introduce visitors to NOCCA alumni and faculty whose work can be seen throughout New Orleans. “Coming up, we will have several themed exhibitions, group and solo shows of alumni and faculty, and shows organized by guest curators,” Cassingham-Bardwell says.

This month, 5 Press Gallery will host a show of NOCCA alumni work centered around “themes or critical dialogue that are interesting in the context of Mardi Gras,” Cassingham-Bardwell says. “We will have a themed show, Twelfth Night, that opens on Jan. 6. While some of the works will be actual wearable art pieces, originally created for Carnival walking krewes, other pieces present social critique, while espousing the same playful or majestic spirit that is seen on the streets of New Orleans at Mardi Gras.” 5pressgallery.com