After the Game Ends 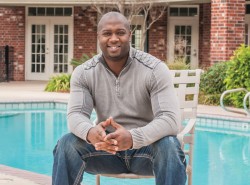 Since his retirement from the NFL after the 2006 season, former New Orleans Saints tight end Eddie Lee “Boo” Williams has been anything but inactive. “Most of my time, I’m back and forth from San Diego to Mandeville,” he says. In California, he works with the Crosby Center, a rehabilitation clinic offering brain scans and neurological treatment, as well as psychotherapy, for mental health disorders and addictions.

Williams has personal experience battling the demons of depression, anger and anxiety. After nearly taking his own life in 2011, he spent four months at the Crosby Center, undergoing brain scans to pinpoint areas of potential brain injury and participating in therapy to manage his depression.

Now, Williams works with the center to advocate for NFL athletes and other contact-sport players who have suffered concussions and other head injuries. The effects of traumatic brain injury can include depression, anxiety, attention deficit disorder, eating disorders, post-traumatic stress disorder and what Williams calls “Hulk Syndrome” — uncontrollable, inexplicable rage that can have a debilitating effect on players and their loved ones.

“It’s a program for mental health, basically,” he says. “We’re helping a lot of athletes to get their self-worth back — helping a lot of guys to see what exactly is going on inside their brains.” He describes the Crosby Center as a “one-stop shop” for athletes whose participation in physically punishing plays has taken a toll on their bodies and minds. “The NFL does not give a damn about these athletes after they’re finished, because they’re finished,” Williams says. “If they can’t work, how are they supposed to make a living? Everyone tells you they make a million dollars — well, they don’t. You only have your insurance five years out of the league, and then you don’t have insurance.”

The Crosby Center’s NFL-athlete program brings in 15 former football players at a time for a three- to four-week rehabilitation program. Some athletes, like Williams, stay longer. “They’re housed [and] fed three to four times a day,” Williams says. “They have acupuncture; they have massage; they have yoga; they have training three times a week.” A legal team helps athletes document their injuries so they can qualify for settlement compensation.

During treatment, athletes also get involved with the local community. “Every Saturday, we have a community outreach program where we take the athletes out to children’s hospitals [and] homeless shelters,” Williams says. “Helping other people becomes healthy for you. That’s part of the rehabilitation process. We’re doing everything possible to rehabilitate these guys’ minds.”

Previously, Williams founded the Boo Williams Athletic Academy, a facility on the Northshore where an after-school program that helped kids finish their homework and athletic practice before their parents arrived to pick them up. “It was basically a training and educational center,” Williams says. “We had 100 computers for the after-school programs. Kids came in and did all their studies … after that, they would train.”

In helping kids complete these two time-consuming activities before dinner, the after-school program aimed to give families more time to connect at home. “Now you can sit down and talk to your kids; see what’s going on in school,” Williams explains. “These days, kids don’t get a chance to talk to their parents.” In the interest of a “big career move,” he closed the academy, but hopes to open another center in New Orleans. “The educational part is definitely needed in New Orleans,” he says.

Williams has four kids ranging in age from 10 months to 13 years old, and he’s currently expecting a fifth. “I love kids,” he says. “When I grew up, I had sisters, but it was such an age gap. I want all my kids to be around the same age, so they can grow up and play together.”

1.94K
previous All in a Day’s Work
next Culinary Calling