Five little steps can put you on a path to better nutrition. 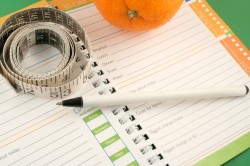 As we face the New Year — 12 whole months packed with unknown opportunities — it’s tempting to make promises to ourselves that we can’t keep. But if any of those promises have to do with your diet, it’s better to start small.
“Do something that’s realistic for you — not something that everyone else is doing,” says registered dietitian Julie Fortenberry. She suggests starting by bringing mindful attention to what you eat and drink. Interested in doing a little more? Read on for Fortenberry’s small-step suggestions.

KEEP A FOOD JOURNAL
Simply writing down everything you eat each day can highlight hidden habits. “If nothing else, just pay attention to what you’re eating,” Fortenberry says. “That’s a really big step that most people don’t do.”

DRINK MORE WATER
Are you dehydrated? You might not realize it. Instead of immediately aiming to drink 64 ounces of water per day — the amount recommended by the Mayo Clinic and other health authorities — try starting with a few sips before your first bites of a meal.

CUT BACK BIT-BY-BIT
“Evaluate what you’re doing, and find small areas where you can make a change,” Fortenberry says. “If you’re drinking two sodas a day, can you cut that back to one instead of cutting out soda cold-turkey? If you eat fried foods a lot, maybe say, ‘My solution is to only eat fried foods once a week.’”

SET REGULAR GOALS
“I always talk to people about setting short-term goals,” Fortenberry says. “For example, ‘This time next week, all I want to have done is have gone grocery shopping, and make sure I have healthy food in the house.’”

Tying goals to dates or events throughout the year also helps keep you on track. “Make small changes and be accountable to something later in the year,” Fortenberry says. “‘By Mardi Gras, I’m going to make another change, and, by Easter, I’ll make another change.’ That way, you’re not setting yourself up for disappointment.”

FORM GOOD SHOPPING HABITS
Resist temptation by making a grocery list and not straying from that list when you shop.

Fortenberry also suggests prepping food right after you get home from the store, which makes it much easier to throw together healthy meals during busy weeknights. “Go ahead and chop your fruits and vegetables, and your meat,” she says. “Try a new recipe once a week for you and your family.”

***Visit your local farmers markets as often as you can. “That way, you can learn to shop what’s in season,” Fortenberry says. She also suggests giving seasonal produce as host and hostess gifts — for example, a basket of bright, fresh Louisiana satsumas.