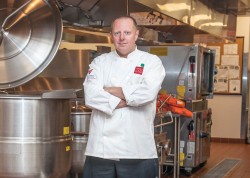 “I was born in South Africa, and I moved to England when I was 11 — where I continued my schooling,” says chef Lawrence Dodds. “Then, I went to culinary school for four years.” After graduating, he entered the world of fine dining, taking a position at the prestigious Waterside Inn, a three-Michelin-starred restaurant in Bray, England. “I became executive chef at about 27 years old, and I was like, ‘What else is out there?’” he says.

“What else” turned out to be food-manufacturing product development — in other words, Dodds began creating fresh, readymade meals and sides, which were sold at clothing and home-goods retailer Marks & Spencer and served aboard some Virgin Atlantic flights. Within a couple of years, Dodds joined Virgin full-time to develop in-flight meals for a number of the international airline’s routes. “That was an unbelievable job,” he says. “I was responsible for all food development onboard all flights out of the UK, inbound from Africa and inbound from India, as well as all kosher food.”

“[Unfortunately], 9/11 took care of that position,” Dodds says. “Food development was then outsourced.” He returned to retail, this time focusing on the customer side. “I was an inspiration chef for Sainsbury’s, meaning that I worked closely with the buyers to bring new product lines to the supermarket,” he says.

Dodds might have remained in England, creating readymade meals, but romance intervened. “Whilst I was in London, I met a Metairie girl,” he says. After getting married, the pair backpacked around the world for seven months, planning to buy a house in New Orleans at the close of their journey — in summer 2005. “The last day of our trip was actually in Rio,” Dodds says. “We sat in front of the TV, watching Katrina come in with tickets to New Orleans in our hands.”

The couple changed their flights to Baton Rouge and came to Louisiana anyway, buying a house in Mandeville nine days later. Dodds opened a restaurant, The Hungry Forager, where he cooked and taught culinary classes for several years. “In that time, I had two kids, and decided that wasn’t the lifestyle for me and two young kids,” he says. He went back to fine dining, working with chef Scott Boswell at the now-shuttered Stella! Restaurant — where he was almost immediately thrown into the position of chef de cuisine — and at Boswell’s commissary kitchen, The Paint Factory. “I learned a lot,” Dodds says.

The chef’s last cooking class at The Hungry Forager included an HR director for Volunteers of America, who mentioned that the organization planned to expand its food services. “When it came around [a year later], she sent me an email,” he says. He interviewed and accepted a position as the program director of Fresh Food Factor — Volunteers of America’s venture to overhaul unhealthy school food. “We opened up on May 13 last year,” Dodds says. “We went straight into summer camps to practice and to get an understanding of the schools’ food systems.”

Fresh Food Factor focuses on cooking healthy meals with which kids are familiar. “One of the things that we try and do here is cook recognizable food in a healthier way,” Dodds says. “We have a lot of the New Orleans favorites on our menu — jambalaya, dirty rice, gumbo. We use a non-oil-based roux in the gumbo, and we don’t use added fat. We try to keep everything as true as possible to its original form.”

The number of schools and educational programs signing on for fresh meals has grown steadily. “This year, we increased our capacity by double,” Dodds says. “We’re doing just short of 2,000 meals a day — 1,000 breakfasts and 1,000 snacks.”

Positive responses from parents and teachers have been plentiful, but Dodds and his staff are mainly focused on students’ reactions. “The biggest thing is actually them eating what we serve,” he explains. “That’s what Volunteers of America is about. That’s why we went into this business in the beginning. With that, our goal is to give as many children as possible a nutrient-based meal that is sufficient for them on a daily level.” freshfoodfactor.org