GNOF president and CEO Albert Ruesga aims to change New Orleans for the better — one philanthropic act at a time. 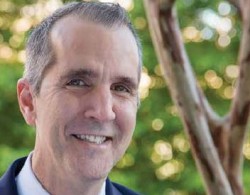 The Greater New Orleans Foundation is arguably the largest philanthropic force in the New Orleans region. With assets of $300 million, it has supported everything from healthcare and education to housing and environmental issues. And the foundation’s president and CEO Albert Ruesga is leading the charge for even more improvements in the New Orleans area.

“The overwhelming majority of these funds we steward for our donors; they’re not ours to do with as we please,” Ruesga says. “One of the main things we do is promote philanthropy. We give donors advice and resources for giving.”

In other words, donors choose the causes and projects they’d like to support, and GNOF supports the donors. As one example, GNOF invests in “donor-advised funds” on behalf of people and businesses who may have a significant amount of money to give away to favorite causes but who don’t have the means or energy to start their own foundations. And GNOF isn’t just for those with thousands of dollars or more to give away. Sometimes it’s just $10.

GNOF spearheaded GiveNOLA Day last May, a single day where people were asked to give at least small amounts of money to their choice of 250 local non-profit organizations. The day was incredibly successful. “We had a goal of raising $1 million from 5,000 donors, and we raised $2.25 million from 12,500 unique donors. And it wasn’t just people in New Orleans giving. “Donors came from 48 states,” Ruesga says. “A lot went into putting the event together. That one day absorbed our staff for six months.”

GNOF can trace its roots back to 1923 when area philanthropists created a local community chest, an organization designed to collect and disburse funds for charitable giving. The regional United Way also has roots in that same original organization, which split when GNOF came into being in 1983. Over the years that followed, GNOF continued on its established path of promoting philanthropy, but Hurricane Katrina made the organization realize it needed to think bigger.

GNOF decided to put its support and $1 million of its own discretionary funds behind the Unified New Orleans Plan. The federal government would not release reconstruction funds without a plan in place, and, in the end, this plan was approved. New Orleans received $500 million in federal recovery dollars.

“It was a risk we took,” Ruesga says. “Our investment in the planning process was substantial, and it could have flopped if the plan hadn’t been adopted by the city and voted into law by the City Council.”

During that time, Ruesga wasn’t working for GNOF. He was recruited in 2009, but the organization has entered a new era under his leadership. Around the time of Hurricane Katrina, GNOF had six employees. Now it has 23. Its assets have grown by about 140 percent.

“It was a nine-ring circus when I arrived,” Ruesga says. “I didn’t just dive into promoting philanthropy. [I also focused on] raising money for our own initiatives.”

Indeed, GNOF is not just a conduit for philanthropy. It also focuses on certain core causes, which fall under three overall categories. First, it seeks to promote economic opportunity by training and assisting job seekers, and by helping asset-poor households save money. Secondly, its environmental efforts look to give communities a voice in coastal restoration and to address flooding issues. Lastly, its organizational effectiveness programs assist local non-profit organizations with learning how to become effective, how to manage finances and how to develop boards. GNOF also has a grants program called IMPACT, which awards funding to a number of non-profit organizations.

Despite GNOF’s fast growth over the past several years, the organization is still headquartered in the same K&B Building office space as when its staff was 75 percent smaller. But that will soon change. Construction has started on a new building on Lee Circle, taking over a weedy lot that had once been a Shell gas station.

“We need more space, but the new building is more than [additional] offices,” Ruesga says. “We’ll have an incubator area for up-and-coming non-profits and an auditorium for presentations. There will be a coffee shop for anyone. A lot of what we do is behind the scenes, and we’re hoping the new building will give us more visibility, both with locals and with tourists who want to help New Orleans.”

Ruesga, who was born in Florida to Cuban parents, moved to Boston to attend the Massachusetts Institute of Technology — where he completed a B.S. in physics. He stayed on at M.I.T. to earn a graduate degree in the philosophy of language. Afterward, he taught philosophy for several years at a small college in Pennsylvania, but, although it was enjoyable enough, he decided that teaching wasn’t for him. All the while, he’d been volunteering for non-profit organizations, and, when he returned to Boston, he noticed a classified ad for a position at The Boston Foundation (the Boston counterpart to GNOF). He got the job and several career advancements, including a decade spent in Washington, D.C., all of which led him to his current CEO role in New Orleans.

“In my spare time, I’m always studying something,” he says. “I like to learn foreign languages, and one of my passions is photography. I’m also currently writing a historical novel on the Cuban revolution.” Although Ruesga has left academia behind, he clearly remains intensely curious about the world — and intent on changing it for the better.