Home IN THIS ISSUE Kenny Stills: The Saints Find a New Leading Receiver
IN THIS ISSUE
SPORTS
January 2, 2015 Paul Wegmann 0

When opportunity presents itself at the door, hopefully preparation is there waiting. 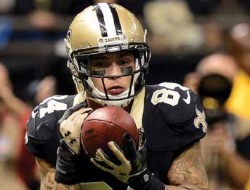 Having seen the Saints go through a spate of roster challenges in October and November — including losing rookie sensation Brandin Cooks for the year and occasionally missing an oft-limited Jimmy Graham — by December, fans may have been wondering if they had found a hero to step into such big, speedy shoes. And although the eternal Marques Colston has kept rocking along with solid catches and one of the NFL’s greatest catch radiuses, he could not seize every pass by himself. It was against that backdrop that second-year wide receiver Kenny Stills leapt forward to take hold of the reins. By mid-December, Stills had become the Saints’ receiving yardage leader. That is correct — Stills had more receiving yards than Marques Colston, Jimmy Graham or Brandin Cooks.

Drew Brees and Stills developed a special connection in 2013 as the pair had their first breakout game versus the New England Patriots. With time running down in the fourth quarter and in desperate need of a big play, Brees hit Stills with a beautiful 34-yard bomb into the end zone to give the Saints a sudden and shocking lead in the most difficult of venues. Ultimately, the play served as a reminder that the Saints’ offense could score from any point on the field, a key feature of head coach Sean Payton’s offenses ever since his arrival. This year, again just when the Saints needed it as their playoff hopes seemed to be hanging in the balance in the midst of their game against the Detroit Lions, Brees hit Stills on a 46-yard touchdown pass. Stills had beaten his cornerback down the middle of the field with straight-line speed. This pass — more than any other — restored public confidence (and that of opposing defenses) in the continuing strength of Brees’ arm, but it also reminded them that Stills is an ascendant talent. In addition, Stills appeared just when the Saints needed him — as in the two games immediately following Cooks’ injury. Stills caught 13 passes for 260 yards and a touchdown.

Against the Baltimore Ravens, in The Mercedes-Benz Superdome, Stills saw his offensive snaps immediately double to 70 percent. He took over a good part of the passing game formerly directed toward Cooks, including some plays that were not previously part of Stills’ repertoire (such as screens and plays involving movement along the back of the offensive formation). It is worth remembering that Cooks was on his way to a 100-catch, 1,000-yard receiving season, which, in and of itself, requires running a wide variety of routes. But again, Stills’ specialty was the long ball — and he had the play of the game, and one of the best of the season, when he stole a deep pass from Brees right over the back and out of the hands of the Ravens defender who was covering him. It was a brilliant catch that almost seemed capable of turning the tide in the Saints’ favor that night. Stills escalated his game even further the next week against the Pittsburgh Steelers; again, his fate (and that of the Saints’ passing game) seemed inherently intertwined. In Pittsburgh, Stills would deliver an exciting performance, beginning with a crucial 44-yard catch on third down in the midst of blanket coverage, seemingly propelling the Saints’ offense forward when they most needed it. This big-play performance continued in the third quarter when Stills made a beautifully executed double move — in conjunction with his 4.3 speed — as he blew the doors off his defender on the way to a wide open 69-yard catch-and-run touchdown.

By the end of that Steelers game, Stills had become the Saints’ leader in receiving yardage, which is a considerable accomplishment as Stills was just the 17th wide receiver selected overall in the 2013 draft. In college, while playing for the Oklahoma Sooners, Stills showed a similar pattern as he improved his yards and receptions each year he was there. It has been often assumed by fans that Stills was drafted to be a replacement for the departing Devery Henderson, who was largely known for his deep speed and for being used primarily in the long game. However, Stills has clearly studied the game and done so in such a thorough fashion that he has shown the ability to handle almost the full load once carried by the very versatile Cooks (who of course was a prized first-round pick this year).

As stated by head coach Sean Payton, “The first thing that’s helped him is he’s someone that picks things up quickly. With his skill set, he’s a player that can run. It’s important the way he’s able to get out of cuts. For that first year, he was able to diagnose what we’re doing in a pretty short period of time. I think others helped him, especially Lance [Moore] and some of the veteran players he has been with. I would say those two things — he’s really smart and has the skill set you’re looking for.” Ultimately, Stills has landed in the right place — where he has been able to increase his knowledge with his studies under Payton, while honing his route and timing skills with Drew Brees. It may not have been intended this way, but, when Cooks returns next year, Payton will then have two very versatile receivers who will offer myriad play-calling possibilities for his ever-creative mind.