It’s Mardi Gras in New Orleans, and it’s time to take the old saying to heart …“Laissez les bon temps rouler!” Roll into a perfect carnival weekend, and enjoy these nearby restaurants, bars and coffee shops along the way. 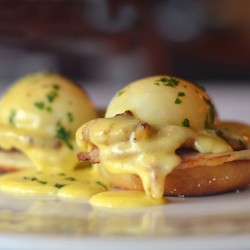 Lunch at: Renovated and reinvigorated with Executive Chef Slade Rushing (formerly of MiLa) at the helm, Brennan’s continues to wow both tourists and locals alike with a fantastic menu and an excellent staff. Choose a prix fixe, three-course lunch, featuring dishes like turtle soup and praline bread pudding, or order from the a la carte menu, offering treats like egg yolk carpaccio with grilled shrimp and crispy sweet potato, New Orleans barbecue lobster, Pompano a la Plancha or a classic Steak Diane. 417 Royal St., (504) 525-9711, brennansneworleans.com

Roll with: Touting a mantra of “Wine! Food! Fun!” Krewe of Cork is one of only a few parades during the Mardi Gras season that actually rolls through the historic French Quarter. Becoming a member of this 15-year-old krewe means Friday lunches throughout the GNO, participation in the New Orleans Wine & Food Experience’s Royal Street Stroll and a carnival parade (taking place on Feb. 6 this year). Members will dress in wine- or grape-inspired costumes, and hand out beads, as they spread their Bacchanalian cheer throughout the French Quarter. kreweofcork.com

Sip at: After rolling with the premiere oenophilic krewe in the city, you might have developed a hankering for a great bottle of vino (or at least a few glasses). Head to Patrick’s Bar Vin, managed by local personality (and Krewe of Cork royalty) Patrick Van Hoorebeek. Lounge in elegant surroundings, and trust the knowledgeable staff to pick out the perfect wine for this exquisite evening. And if you’re looking for something extra special, ask to see the Owner’s List. 730 Bienville St., (504) 200-3180, patricksbarvin.com

Revive at: Located on the corner of South Carrollton and Cleveland avenues, Monkey Monkey Coffee and Tea is one of the city’s newest coffeehouses. No aping, this bright and colorful corner java joint offers all kinds of beverages from mochas, lattes and frappes to Italian sodas and imported loose-leaf teas. Monkey Monkey also offers snacks both savory and sweet (like house made cookies, cinnamon rolls, bagels and cakes). 4641 S. Carrollton Ave., (504) 324-4899, facebook.com/monkeymonkeynola

Roll with: Founded in 1966 and named after the shepherd of Greek mythology, Endymion is easily one of the largest parades to witness during Mardi Gras. It’s also the only parade that rolls through Mid-City on it’s way downtown. The theme for 2015’s Krewe of Endymion parade and extravaganza is Fantastic Voyages, featuring state-of-the-art LED lighting on floats laden with over 2,800 members tossing millions of throws to the crowds. Endymion will start out at New Orleans City Park and end up at the Mercedes-Benz Superdome, where the extravaganza will be held … do you have your tickets? endymion.org

Dine at: Fat Falafel owners Theresa Galli and Gavin Cady have finally opened a brick-and-mortar version of their beloved food truck in Mid-City, dubbed 1000 Figs. Located a couple of doors down from Fair Grinds Coffeehouse, this modern, yet casual new eatery features a simple menu — with dishes like their famous falafels, local smoked chicken salad sandwich on a semolina loaf (made by Leo’s Bread), and flash-fried Brussels sprouts. Also, in case you’re wondering, there are no figs on the menu at 1000 Figs. You won’t even miss ’em. 3141 Ponce de Leon St., (504) 301-0848, 1000figs.com

Brunch at: Be prepared to wait in line at the popular Uptown breakfast spot Coulis, but be equally prepared for a fabulous meal. For the past five years, this neighborhood restaurant on Prytania Street has been serving up specialties, like eggs Creole with sausage gravy; corned beef hash with grilled mirliton and hollandaise; special French toast stuffed with cream cheese; and malted or buckwheat pancakes topped with blueberries, bananas, chocolate chips, pecans, strawberries, whipped cream and powdered sugar. 3625 Prytania St., (504) 304-4265

Roll with: With over 30 floats and 1,400 members, the Krewe of Bacchus parade is likely one of the most popular Mardi Gras parades in the city. Bacchus takes the traditional Uptown route, starting on the corner of Tchoupitoulas Street and Napoleon Avenue, and rolling down St. Charles Avenue and Canal Street — only to make a loop, and come back all the way to Julia Street and Convention Center Boulevard. Bacchus’ 2015 theme is Children’s Stories That Last Forever, and the reigning celebrity is actor, singer, producer, screenwriter and comedian John C. Reilly. kreweofbacchus.org

Relax at: After screaming, “Throw me somethin’ mister!” and waving your arms in the air for several hours, it’s likely time for some delicious Vietnamese comfort food to warm you up and fill your belly. Head straight over to Pho Cam Ly on Magazine Street. Easily one of the most authentic Vietnamese restaurants in a rash of recent East Bank openings, Pho Cam Ly offers everything from egg rolls and spring rolls to banh mi and pho. Try a steam bun with lemon grass chicken or grilled pork, a Chinese sausage banh mi or a steaming bowl of pho with beef meatballs or brisket and rare eye of round. 3814 Magazine St., (504) 644-4228, phocamly.com