Home IN THIS ISSUE The Sixth Man in New Orleans: Ryan Anderson
IN THIS ISSUE
SPORTS
February 1, 2015 Paul Wegmann 0

The New Orleans Pelicans have an ace in the hole. 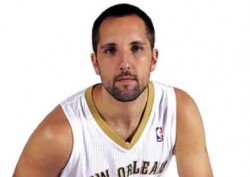 It has been well established in the NBA that more is needed than just one star. While Anthony Davis has ascended into the pro basketball firmament as a top-five, all-league star, it has become increasingly urgent to find the right balance and chemistry that will make the New Orleans Pelicans a well-rounded team in the playoff hunt and beyond. The new cornerstones of the Pelicans have become familiar to local fans, as the rotation of Jrue Holiday, Eric Gordon, Tyreke Evans and Jimmer Fredette run the floor at the point- and shooting-guard positions nightly, while Ömer A?ik and Alexis Ajinça regularly hold the center with their twin-tower frames. However, sixth man Ryan Anderson has remained a quiet yet essential presence in the flow of every game, providing a hand in almost every win the Pelicans have earned this year.

Despite having started only one game at power forward, Anderson (along with Davis) has been a constant in the rotation. His omnipresence is shown in the stats, as he is third on the team in points per game (15.5), shots per game (13.1) and offensive rebounds per game (2.0), he regularly gains starter minutes (averaging 29.0) and he’s fourth in rebounds per game (5.5). Of course, his most prominent role is that of being the team’s three-point ace — leading the team in attempts and treys, and seemingly finding a regular spot in the league’s top 10 for three-point attempts and field goals made.

Bringing the right dynamics to boot at 6-foot-4-inches and 240 pounds, Anderson seems on the verge of becoming a top power forward for the league itself. When he rotates in for a resting Davis at power forward or for A?ik at center, he brings a different but very effective game that opponents must counter. When Anderson plays with Davis and A?ik as “the bigs” in combination for limited periods, the team seems to surge. His role in the team’s pick and roll movement is particularly important, as teams have to account for him whether he stepping in to receive the pass or whether he is slipping out to screen.

As evidence of the effect Anderson has on the team’s fortunes, before suffering an injury last year around New Year’s Day, the Pelicans had earned a 12-10 record in Anderson’s 22 games with the team; in the stretch immediately afterward, the team went 1-9, including an eight game losing streak that essentially ended the team’s hopes for making the playoffs. Of course, this year the Pelicans are very much in the playoff race — and Anderson is a big part of those plans. The team is faced with the extremely difficult task of overpowering the other four teams in its Southwest Division that it must play (and conquer) — more than any others — all of which have winning percentages of 60 percent or greater, and thus all seemingly betrothed to a future appearance in the playoff tournament. However, the Pelicans clearly have a leader and a weapon in Anderson — and in more ways than one.

In Anderson’s first game back after a long and difficult rehabilitation from his season-ending injury in the midst of the 2013-14 season, which included spinal surgery for a herniated cervical disc, he led the team back to victory with his rare blend of shooting and rebounding. As coach Monty Williams said at the time, “He has the ability to change the game with his shooting and rebounding. He does so much for our team. He had seven offensive rebounds — how many guys can actually do that and knock down threes?” Holiday also commented that, “Obviously, Ryan brings that off the bench. He brings that energy. He’s that go-to guy and that’s what he’s capable of at any time.”

In addition, Anderson provides excellent insurance for that most disastrous of scenarios — one in which Davis must leave, or even miss games, for any period of time. Against the Cleveland Cavaliers and LeBron James, Anderson stepped in for an injured Davis early in the first quarter. He emerged with eight three-point goals (a career high), 30 points to go with four rebounds, one steal and 50-percent shooting from the field overall, helping the Pelicans to an upset win. In the next game, against the best team in the league, the Golden State Warriors, with Davis sitting, Anderson made his only start of the season. He logged 45 minutes and put up 15 points, six rebounds, three steals and two turnovers. These stalwart efforts, while exciting to watch, were unfortunately not enough to stave off a close overtime loss.

The sixth man in the NBA can at times seem like an unwanted job, and yet no team can be very successful without a good one. Manu Ginóbili of the San Antonio Spurs is perhaps the quintessential example — the ultimate team player who leads the reserves off the bench, while, at the same time, seamlessly fitting in with the starters. Anderson’s presence allows key players, like Davis and A?ik, to gain much needed rest, but he also adds spark and leadership to younger players stepping onto the court. Having a player like Anderson who is a team leader, all-around scorer, long-distance shooter and powerful rebounder all in one is a rare commodity and perhaps the second most important building block the team has after Davis himself. Pelicans fans have a lot to look forward to in the upcoming playoff run, and, if it is a successful one, Anderson will be in the middle of it.