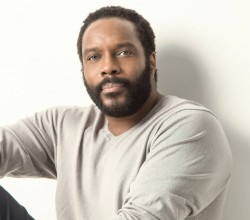 Zombies are coming, and America couldn’t be more ravenous for their gory return. The eight-episode, second half of season five of The Walking Dead — the post-apocalyptic zombie thriller ranked as the No. 1 television program and the most popular cable series of all time — debuts Feb. 8 on AMC. Actor Chad L. Coleman, who plays gentle giant Tyreese on the supremely popular Golden Globe® award-nominated horror drama, promises that things are going to get even wilder after viewers were left speechless following the mid-season finale. “There’s going to be a major whopper coming down,” he says. “Every time you think, ‘No way, it can’t get any better,’ it keeps popping! The way it’s gonna shake ’em up is amazing!”

Coleman is no stranger to playing meaningful characters with admirable gravity on serious trailblazers in American television; he also played reformed criminal Dennis “Cutty” Wise on the Emmy® award-nominated HBO drama series The Wire. And fans resonate with Tyreese as well. “The beautiful thing is that Tyreese has lots of different layers to him,” Coleman says. Tyreese is a strong and emotionally complex guy who struggles with deciding what to do in order to protect his group of survivors, often choosing to limit his use of force to just what’s necessary to ward off threatening marauders, instead of polishing them off completely.

“People sometimes say, ‘We want to see Tyreese kick ass more!’” Coleman says. “I mean, they’re floored with the work. But Tyreese is so reality based. He’s not a super hero. He’s a real man. There’s nothing one-dimensional about him. He uses just the right amount of force to stop the threat. Ask any real man if he can pick up a gun and just kill somebody — it’s just not the way it is. We cringe in horror when we see murders in real life, so you have to look at it through that lens. It’s kind of opposite to the stereotypical idea of a big black man. We all have that sensitive side, and, men who don’t negotiate that side of themselves, tend to become tyrannical. You need the balance and not just play Rambo all the time.”

Coleman’s gracefulness in deciphering the intricacies of man’s humanity alongside his demanding physicality through his portrayal of Tyreese is part of the gruesome yet sensitive recipe that makes The Walking Dead so deliciously riveting. “It’s very human,” Coleman says of the show, which is based on the eponymous graphic novel by Robert Kirkman. “We expect the murder, but, if all I did was smash people’s heads in, it would not be as compelling a character. But when you do see me kick ass, trust me, you don’t want to be on the receiving end of that — when I pick them up, and slam them like a linebacker and beat their faces in.”

And the record-breaking show that possesses as much brain and heart as it does blood and guts will be around for quite some time, thanks to the constant climb in viewership; over 16 million tuned in for the last season finale of The Walking Dead. It’s phenomenal that a dystopian zombie freak fest has managed to enrapture a massive chunk of the American television-watching audience, and Coleman understands why. “It appeals to the child in all of us,” he says. “Everybody has a relationship with terror and scary movies. It all started at Halloween when you put your little skeleton costume on and you learned that being scared was fun. Then it puts all this sophisticated, amazing storytelling, acting and special effects on top. If this show looked cheesy we wouldn’t be getting these numbers. People enjoy that ‘Oh I can’t watch it, it’s too scary!’ kind of thing! I watch it and go ‘Ahh! Ooh! That’s so real! Oh my God, that was the grossest! Lemme see it again!’”

Coleman’s deep visceral appreciation for The Walking Dead is no surprise, given that he was blessed with a natural eye for photography. “I always loved communications, and, in 8th grade, we got an assignment to shoot at the zoo,” Coleman says. “Somebody stole all my photos because they turned out really good!” Coleman also made Super 8 films with his school’s movie club, but his passion for acting was greater than anything. He studied acting then opted for a practical vocation, serving for four years in the United States Army as a video cameraman stationed at the Pentagon before he hit the ground running as an actor.

“I started in the theater,” Coleman says. He acted in plays before landing roles in television and film, including his comedic turn as Gary Miller in the FOX television comedy, I Hate My Teenage Daughter, and other projects, such as The Good Wife, It’s Always Sunny in Philadelphia, The Green Hornet and Horrible Bosses. “I was even able to perform on Broadway for the President of the United States in 2009 — on that date night in New York he promised Michelle — in the production of Joe Turner’s Come and Gone at the Belasco Theater. It was an amazing experience.” Coleman’s theatrical work also brought him to New Orleans in 2003, when he performed at the Saenger Theatre in a play called The Exonerated with Gerald McRaney.

“What I love about New Orleans is the food and the history,” Coleman says. “I was also down there for the Ravens Super Bowl a few years ago, and I really loved it. And I identify with Louis Armstrong, who came from that cradle. Despite all that incredible negativity he was up against, he chose to keep smiling. It behooves you to have a positive outlook in life. Things happen, but how you deal with it is entirely up to you.”

Although he possesses a profoundly sunny disposition, Coleman has had his own share of struggles as a child. “Unfortunately, something happened with my parents,” he says. “They were off somewhere, and we were left home alone. My 7-year-old brother decided he had to cook something for us to eat, because we were crying and hungry, and, when he did that, he set the project on fire! Next thing you know, we were in the foster-care system. George and Lottie Byrd, a couple raising their 4-year-old grandson, were thoughtful enough to say, ‘Let’s get him a little friend to hang out with.’ When my foster mother went to social services, the social worker was like, ‘You gotta see these five kids!’ My brothers were 7 and 6, my sisters were 4 and 3 and I was 11 months. Lottie went back and told George, and he said, ‘Bring them all.’”

Coleman makes time to give back to children in unfortunate circumstances by being very active in charitable organizations. “I speak to kids in the NYC Law Enforcement Exploring Program,” he says. “These explorers are our future police officers, so I encourage them to continue to invest in their community — so when they become police officers, they can be part of eradicating all of this negative tension between officers and young people in our community. I also work with Camp Diva, which is transforming the lives of young girls — one young lady at a time. I always speak to young actors and artists, because I want to be encouraging of them, because other people can be discouraging and say things like, ‘You can’t make a living as an actor!’ I love doing stuff for kids in foster care and those who have cerebral palsy. And I love the Make a Film Foundation, where children with debilitating diseases get to make a little movie together.

When I see 2-year-olds in the hospital having chemo treatments for liver cancer, I’m reminded that our spirit is our greatest gift. When you lead with positive energy, you’re speaking to the positive energy within another person. That makes them feel better. It’s a beautiful thing. That helps me have the proper perspective in life. You gotta enjoy the sunset while you’re looking at it, instead of living in your head, because you’ll miss out on some of the most amazing things that are right in front of your face!”

Coleman’s humanitarianism and talent has not gone unnoticed by his hometown; in December, Coleman was honored as the grand marshal of the 2014 Dominion Christmas Parade in Richmond, Virginia. “That was a surreal moment,” he says. “I remember my buddy Monti Sharp, who was on The Guiding Light, telling me, ‘I’m going back to Louisiana, man, they want me to be the grand marshal!’ I always had that flicker in me that my hometown would be proud enough of me one day, so, when the call came, it was incredibly amazing. It was an outpouring of unconditional love from my community! The only thing that could have rivaled it was if my foster parents and my real parents were alive and were there with me — then I would’ve probably just fell off the float!”

Later this year, Coleman will star in Syfy’s powerful new show, The Expanse. He says he’s pumped about his role as Fred Johnson, a former marine caught in an interplanetary conspiracy between Mars and Earth. “I got fitted for my space suit today,” he says. “It’s so cool! He’s a very multi-layered character, and I have such good vibes and feelings about this show.” No doubt, Coleman will bring more of the fascinating work he’s famous for to the intergalactic horizon for his next endeavor.