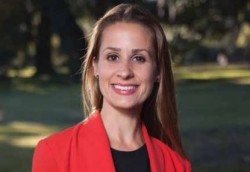 If you think back to your school years, you’ll probably remember days that you had a substitute teacher as days off from the routine. Maybe the substitute would give the class a worksheet. Maybe there’d be a video to kill the time. But a young start-up called Enriched Schools has been transforming substitute teacher days in New Orleans-area schools into something beyond busy-work.

“We have 150 creative mentors registered with us, and we place them in schools and match them with specific requests,” says André Feigler, founder and CEO of the company. These creative mentors are poets, public health advocates and performers. They are musicians, chemists and youth counselors. What they have in common is something unique and passionate to offer students. They teach concepts that are often supplemental to the standard coursework but that aim to be essential in creating well-rounded, engaged students.

And although they might teach outside of the syllabus, the instructors often teach lessons that turn out to be quite relevant. “One of our teachers, a poet named Quess?, spent two days in an English class sharing a poem of his and having students write their own,” Feigler says. “Two weeks later, these students aced the poetry section of an exam even though their regular teacher hadn’t gone over the material yet.”

If a school just needs a reliable instructor for a day and not a creative lesson, Enriched Schools is able to accommodate that too. The company aims to meet schools’ needs. Still, the idea is to go above and beyond standard temp agencies and other typical sources for substitute teachers. Feigler doesn’t know of any other group in the country doing what Enriched Schools does for substitute teaching.

“My passion is placing creative mentors in schools, and that was the idea that began Enriched,” Feigler says. “The substitute teaching part actually came second. We use it as a way to work mentors into schools’ schedules.”

Enriched Schools has only been around for a few years, but it’s looking to add more capabilities and expand. Currently, Feigler and her team are involved in the daily matching of schools and teachers, but she’s looking to build an online platform that will allow schools to browse through available teachers and book them directly. She also has her eyes on growing within Louisiana and elsewhere in the country, such as Washington, D.C.

“We work with many New Orleans charter schools, and a school system with a lot of charter schools is a good fit for us,” Feigler says. “The area would also need to have an open-minded culture that’s willing to try new systems and a good supply of potential mentors.”

Feigler can be considered part of New Orleans’ post-Hurricane Katrina brain gain. Her parents are from New Orleans, but Feigler grew up in various other places (overseas and eventually settling in North Carolina), because of her dad’s military career. Still, she and her family visited New Orleans often for holidays and festivals, and she often considered living here.

She was studying a liberal arts curriculum at Barnard College in New York City when the hurricane hit. After graduation, she came down to accept a Teach For America position at Chalmette High School. When she applied for TFA, she put the New Orleans region as her top choice (and probably wouldn’t have accepted if placed elsewhere). While she was there, she started a student running club.

“The kids didn’t have anything to do after school and didn’t exercise enough. I invited anybody who wanted to join me on my afternoon runs,” Feigler says. She and some colleagues formally developed this idea into Youth Run NOLA under the umbrella of the Young Leadership Council. Today, Youth Run NOLA is an independent non-profit that has served more than 400 students at 19 school sites. Feigler remains an advisor to the organization.

After she finished her teaching stint, Feigler stayed with Teach For America in an administrative capacity. She also took some time to work on the state school-board campaign for Kira Orange Jones, her boss at TFA. When Feigler formed Enriched Schools, it drew on these various professional experiences.

“Youth Run NOLA gave me a taste of what it’s like to see a need and then create something successful around it,” she says. “My job at Teach For America taught me staffing logistics and introduced me to area schools. And when I was helping with the political campaign and talking to voters, I got to meet so many wonderful people. I knew how much they could inspire students in their communities.”

The first year of Enriched Schools was a time to get the word out to schools, to recruit teachers, and to figure out what did and didn’t work. Feigler is still pushing her limits and exploring new ways of doing things. “There’s no road map for any of this,” she says. “There’s no book you find. We’re figuring it out as we go along.”